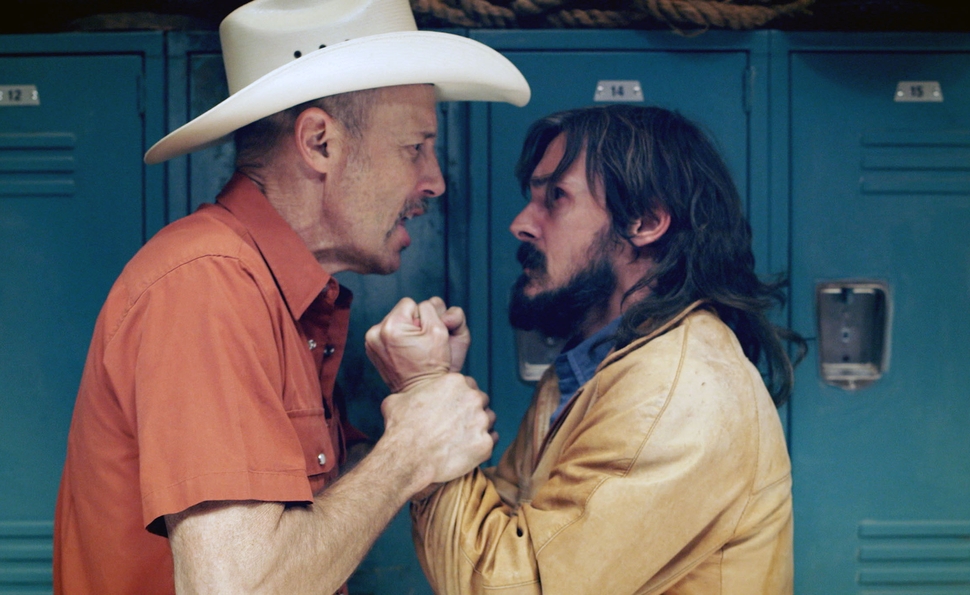 “You have an awfully inquisitive nature for someone who’s about to plunge to his death.”

The most deliberately amusing line of dialogue in Locker 13 is also a succinct way of describing those sad few curious enough to seek out this amateurish anthology, a chintzy riff on The Twilight Zone’s classic formula of filtering broad moral lessons through a pseudo-horror strainer. The long-gestating brainchild of Brothers Ink Productions, an Arizona upstart run by Adam and Donovan Montierth, Locker 13 isn’t a film so much as a dire symptom of a culture in which the ability to fund a movie has become reason enough to make one. Locker 13 consists of four shorts and a wraparound that makes a feeble effort to bind the various segments together, but it doesn’t feature a single story half as interesting as its production process was.

Here’s how the Montierth brothers describe the scheme on their Kickstarter page, which successfully raised their needed $25,000 finishing fund, but failed to meet the stretch goals they outlined for marketing and theatrical distribution:

“Our initial vision for Locker 13 was to independently write, produce and shoot separate stories, all connected by a mysterious locker 13 and then to put them together to form the final film. For each segment of the film, we planned on raising the money and going through each of the 3 stages of Pre-Production, Production, and Post Production individually from each other, so that at any given time during the project, we had one segment in Pre, one in Production and one in Post, until we were finished with the film.”

It’s a neat idea, and serves as further evidence of how adaptable the horror genre is to new economic environments. Unfortunately, the potential merits of this production strategy are wasted on a project that seems hellbent on proving it was all a terrible idea in the first place. Like many horror anthologies, Locker 13 has a bit of a throwback vibe: The soft lighting and long haircuts of the third segment, coupled with the appearance of Emmanuelle In Space star Krista Allen in the fourth, suggest Locker 13 didn’t result from the digital revolution so much as it fell out of a wormhole linked to the softcore cable of the mid-1990s.

Locker 13 begins with an amusingly derivative bit of misdirection, dropping the audience into a woefully inauthentic Western in the midst of a duel that’s revealed to be a staged attraction in an Old West theme park. Skip (Jason Spisak) is the theme park’s newest employee, an ex-con on the first day of his work-release program. He’s the audience’s hapless conduit to the incoherent mythology of the titular locker. His supervisor, Archie (Jon Gries), is essentially a cross between Rod Serling and a substitute teacher who didn’t bring a lesson plan because he’s just brimming with invaluable wisdom. As Archie walks Skip around the park and shows him the ropes, they encounter a series of strange items with backstories that blossom into self-contained shorts that have little in common, beyond a shared need to shoehorn in a reference to the mysterious Locker 13.

The jarring transition from the garishly plastic look of the wraparound to the textured lighting of the first segment is the first clue that the film’s unusual production method created an uneven viewing experience. Starring Rick Schroder, shot by Russell Carpenter (who won an Oscar for Titanic), and directed by Matthew Mebane (the second assistant camera operator of Inherent Vice), “Down And Out” is the exhausted tale of a washed-up boxer whose career is transformed by a “killer” pair of gloves. Sadly, it represents Locker 13 at its best. Hogging a disproportionate percentage of the film’s resources and creative energies, this inoffensive short was made back in 2009, then used to fund the rest of the anthology. (“We have a cameo from Ashley Banks herself, Tatyana Ali! Give us your money!”)

It’s clear long before the closing credits that the creative teams responsible for each of the stories worked completely independently, though there’s a consistency in the way all the writing feels equally disinterested in connecting to the wraparound story. It could be argued that the final chapter makes a halfhearted attempt to tie things together, but most people are likely to abandon ship an hour earlier, during the clumsy bit about a wacky Shriners International meeting, or a truly bizarre episode in which Suits star Rick Hoffman plays a Spanish assassin who makes poor use of his awesome (but unfurnished) loft.

Whenever the action returns to the theme park, Skip is understandably not paying attention, and Archie is diagnosing the most recently resolved digression with an unspecific moral. “Everything has a story,” Archie says at one point, and while it’s the rare adage that Locker 13 coherently illustrates, the lingering moral is that most of those stories aren’t worth telling.