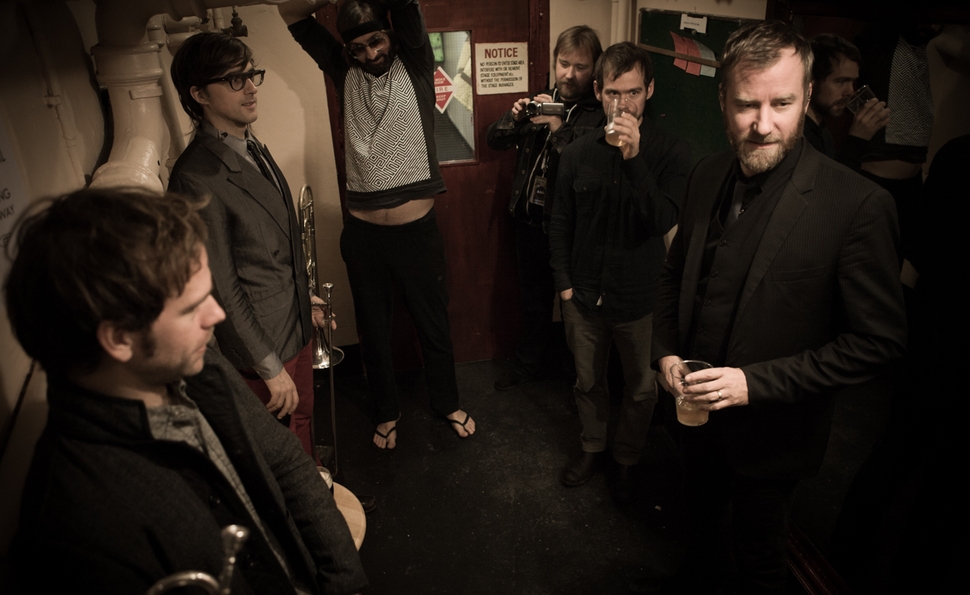 If Mistaken For Strangers weren’t a documentary, it might have worked as a high-concept comedy. A tour film of sorts, following The National as the group makes the rounds with its 2010 album High Violet, Strangers was shot by Tom Berninger, the younger brother of lead singer Matt Berninger. Tom is both the film’s director and its most memorable character. A dead ringer for his more famous brother, plus a few pounds and minus the stylish haircut, Tom stayed behind in Cincinnati while Matt’s band slowly become one of the most successful and respected indie bands around. Though Tom clearly loves and respects his brother—even though, as a metalhead, he hasn’t much use for The National’s music—he’s clearly a bit adrift, a frustrated artist who’s never entirely figured out what to do. As the film opens, he apparently still lives with his parents, making horror films that make Mark Borchardt’s efforts look big-budget by comparison. But an offer to tour with The National as a roadie while making a movie about the band gives him a sense of purpose, one that’s only defused by his seeming inability to get either job done.

Mistaken For Strangers, which covers Tom’s time with the band and his subsequent attempts to piece together a movie about that time, is a sweet, funny, and sad film, but also an exceedingly odd one. Onscreen, Tom comes off as a well-meaning goofball who trails chaos behind him; in the fictional version of this story, he would almost certainly be played by Zach Galifianakis. He pesters his fellow roadies about their jobs until they bat him away, and seems incapable of carrying out simple tasks. In one of the film’s funniest moments, Matt grows frustrated with him for losing a guest list, stranding comped concertgoers like Werner Herzog and the cast of Lost outside an L.A. venue. His interview style mostly involves blurting out questions like, “Do you carry wallets onstage with you?” and he has a habit of asking band members to strike ridiculous dramatic poses that they have a hard time assuming with a straight face.

But the Tom Berninger who put the movie together is clearly more thoughtful than the one in front of the camera. He edited the film with Carin Besser, Matt’s wife and a former fiction editor at The New Yorker, so it’s tempting to spread the credit around. But whoever the driving force behind the film’s final shape, Mistaken For Strangers ultimately emerges as a multifaceted self-portrait. Cautioned to stay away from alcohol by his brother because he has “the allergy,” Tom grows increasingly irresponsible as the tour progresses, and his resentment toward his brother, however wrapped up it is with love, comes to the surface. There’s a whole life story inscribed in a scene where Tom misses a tour bus because he stayed too long at a bar: Matt panics, then finds his brother, then blames him for fucking up again, while Tom looks for others to blame. The film disappears into its own navel as the focus shifts toward Tom’s attempts to complete the film. But even as it starts to feel like it’s becoming its own making-of documentary, Mistaken For Strangers remains a memorable depiction of a man with talent and not quite enough drive and focus, haunted by a brother who has all of the above in abundance. If Tom can find a way to make another movie as candid and winning as this one, however, all that could change.