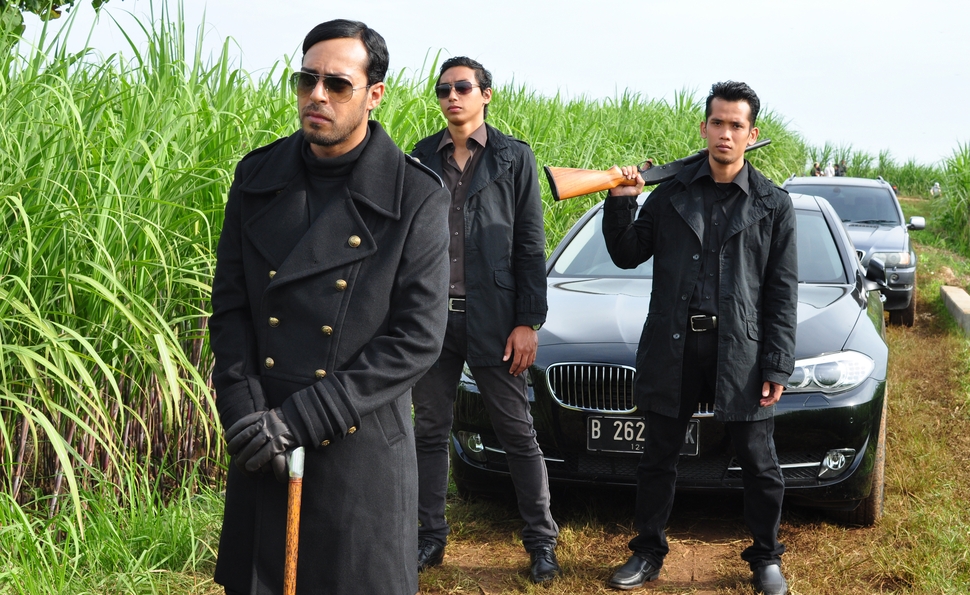 Gareth Evans’ 2011 thriller The Raid: Redemption won action fans’ favor because it was so refreshingly unadulterated. Set almost entirely in one location, The Raid is essentially one long fight scene, as a young cop named Rama (played by pencak silat champion Iko Uwais) joins his colleagues in an unauthorized, unceasing assault on a crimelord-controlled apartment. As Rama works his way up the building floor by floor, like a videogame hero, he’s confronted with surprise attacks and unwelcome revelations, and reveals secrets of his own. But The Raid isn’t the kind of movie meant to draw in the audience with a complex plot and strong emotional underpinnings. It’s meant to make a crowded theater go “Oof!” in unison, then chuckle with shared pleasure.

Evans’ The Raid 2 ups the level of ambition without substantially deepening the premise. Iko’s Rama returns, no longer as an underestimated rookie, but recognized by his superiors as a hyper-effective crime-fighting weapon. At the start of The Raid 2, Rama is ordered to abandon his family—the people for whom he took this job in the first place—and go undercover in prison, so he can cozy up to Ucok (Arifin Putra), the son of the biggest boss in Jakarta, Bangun (Tio Pakusodewo). When Rama gets out of jail, he becomes an enforcer in Bangun’s organization, periodically reporting back to his possibly corrupt superiors on the police force about the underworld’s internal power struggles, which are about to touch off a citywide gang war.

While The Raid distilled the martial-arts genre to a series of small-scale, violent encounters, The Raid 2 expands Rama’s playing field to include muddy prison yards, shady clubs, vice-packed warehouses, and corporate boardrooms. The film’s message is that crime is so pervasive that no aspect of modern society remains unaffected. But as with the first film, The Raid 2 ultimately comes down to situational ethics. Though pretty much everyone Rama encounters is a bad guy, his sense of duty keeps him on the job, dispatching the worst of the creeps with speed and savagery. The plot of The Raid 2 is much denser, but because the theme is no richer, the roughly 25 percent of The Raid 2 not consisting of fight scenes is fairly tedious. There’s nothing in the movie’s “lone noble man beset by fiends” concept that hasn’t been done better in other films, many times over.

But oh, that other 75 percent. The tedium of The Raid 2’s setup is offset by some of the most jaw-dropping, bone-crunching, flesh-ripping setpieces ever filmed. The Raid showed Evans and Iko to be masters at choreographing and shooting gunplay, swordplay, and fisticuffs. With The Raid 2, they add spectacular car chases and a cast of colorful villains, including a pair of hired goons who use a pair of hammers and a baseball bat and ball to dispatch their victims. In action-movie terms, the difference between this film and its predecessor is like the difference between Terminator 2: Judgment Day and The Terminator. Every standoff is larger in scale, and designed to make the one before look like prep-work. More importantly: The stunts are analog. Even at their most extreme, the action scenes are grounded in human physicality—and frailty.

That’s why the success of The Raid 2—just like The Raid—all comes down to Iko, one of the most remarkable movie martial artists to come along in decades. He’s lightning-quick, with athletic grace and the eyes of a strategist. Iko doesn’t bring much emotional resonance to Rama, because Evans’ script doesn’t allow for much. But Iko and Evans both excel at constructing action sequences that look like elaborate puzzles, where the hero’s always thinking three moves ahead. When Rama is facing down a room of would-be assailants, and knocking one aside so he can kneecap another, it’s like he’s solving a Rubik’s Cube, twisting human bodies rapidly to find the solution.