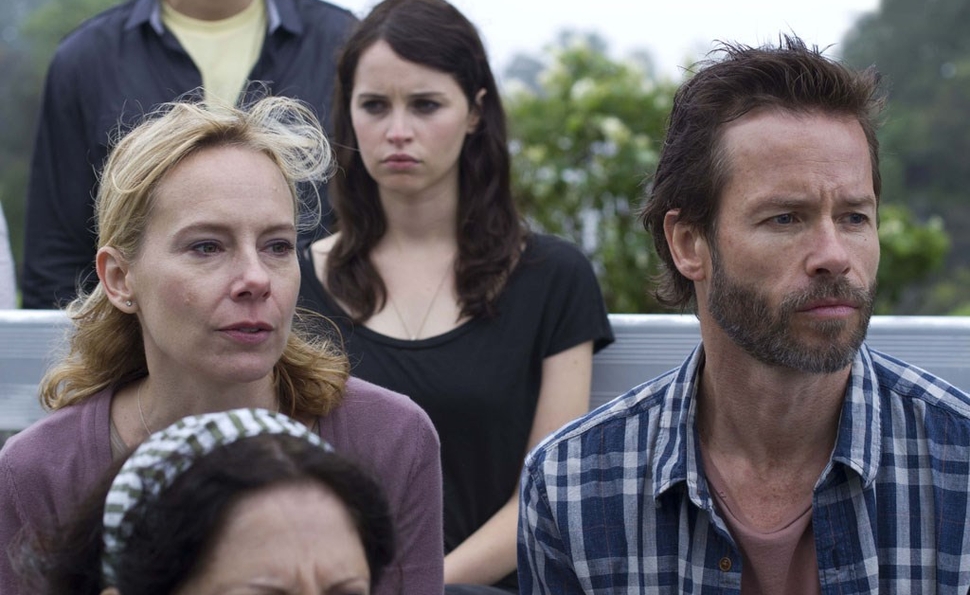 Infidelity is nearly always portrayed as a destructive force in movies—which makes sense, since it’s generally a destructive force in real life. What varies onscreen is where the illicit lovers (or would-be lovers) fall on the continuum of audience sympathy. The more right they seem for each other, the harder it is not to root for them, on some level, and the more bittersweet it feels when order is restored. Drake Doremus’ Breathe In attempts to do something tricky, which is to take a scenario that begins like Sex, Lies, And Videotape (in which the end of the heroine’s marriage feels entirely justified) and turn it into something like Brief Encounter (in which every possible resolution registers as heartbreaking). It’s commendably ambitious, and Doremus certainly has the right actors for the task. Trouble is, he and his regular collaborator, Ben York Jones, have real problems depicting credible human behavior. In their previous film, Like Crazy, the characters behaved like cretins; in this one, they’re just clichés.

Breathe In wastes no time in establishing a long-married hero whose loving spouse, on some level, just doesn’t get it. Cellist Keith Reynolds (Guy Pearce) once played in a rock band, and dreams of landing a chair in a symphony orchestra; instead, he’s settled for teaching music at a public high school in the sticks. When he suggests that the family move back to New York City, his wife, Megan (Amy Ryan), firmly says they can’t afford it. Then a British exchange student named Sophie (Felicity Jones) comes to stay with the Reynolds family for her semester abroad. She and Keith hit it off so instantaneously that she attempts to drop out of his class on the first day, already sensing danger. Before long, however, she’s providing Keith with all the support, encouragement, and understanding that boring old Megan doesn’t, and the two of them are plotting to run off together. It won’t be so easy, however, as they’re spotted canoodling by Keith and Megan’s teenage daughter, Lauren (Mackenzie Davis), who happens upon them the first and only time they’re out in public.

That dopey coincidence is typical of Breathe In’s blunt, hackneyed approach to a scenario that demands subtlety and nuance. Megan’s hobby, for example, is collecting cookie jars, which gives her a lot of things to smash when she inevitably discovers what’s going on in her house. Lauren, who was briefly great friends with Sophie, hears a rumor that Sophie slept with a guy Lauren likes at school (actually, he nearly tried to date-rape Sophie) and their relationship turns instantly, distantly hostile, without ever Lauren so much as asking Sophie about it. Kyle MacLachlan turns up in a hilariously awful uncredited cameo as a friend of Keith’s whose sole purpose is to see Sophie in a bikini and point out to Keith how attractive she is, musing aloud about how much trouble he’d have keeping his hands off of her were he in Keith’s shoes. At every possible turn, the film chooses to take the dumbest and most reductive path.

It remains semi-watchable nonetheless, which is a testament to the skill of its four lead actors, who valiantly struggle to remain truthful. Reportedly, Doremus and Ben York Jones (who co-wrote the script) let the cast improvise most of their dialogue, which explains why Sophie and Keith are constantly saying banal things like, “It’s so hard to actually do what you want to do” and, “It’s hard to know how to be truly free.” (Subtext: Life is hard.) Nonetheless, moments of emotional authenticity do occasionally emerge, with Pearce in particular giving a remarkably soulful performance that often transcends his cardboard role. And it’s hard not to be impressed by the movie’s abrupt, decidedly unsettled conclusion, which acknowledges the irreparable damage that even fleeting betrayal can cause. Too bad the journey to it is so damn bumpy.