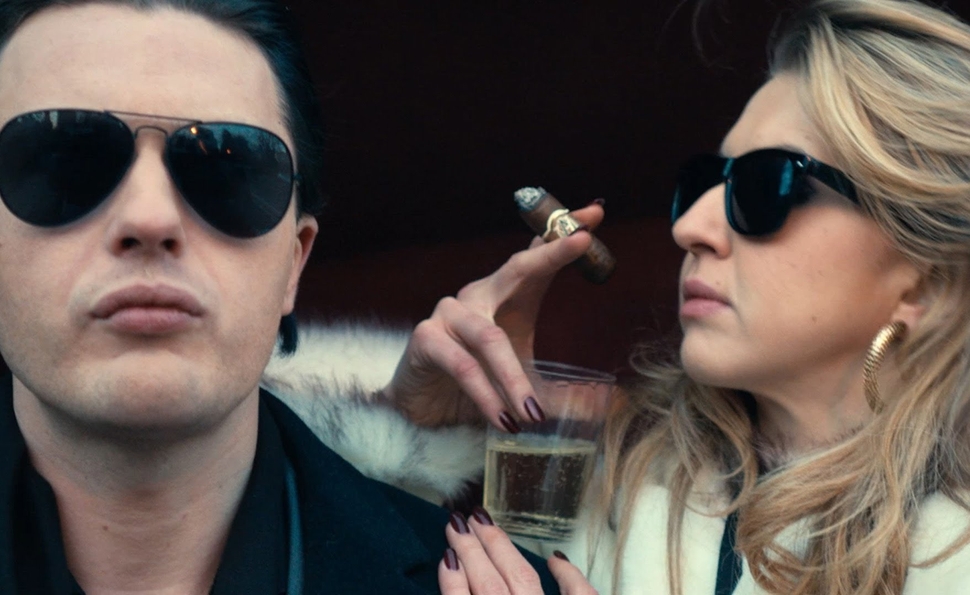 It’s 1991 in New York City, and groove is in the heart—not only for Deee-Lite, but also Tommy (Michael Pitt) and Rosie (Nina Arianda), a couple of big-city kids who can’t help grinding on each other at all hours of the day, and don’t need a club anthem to get started, either. Young, dumb, and free of cumbersome notions about the social contract, they celebrate Valentine’s Day by robbing a florist and are rewarded with twin stints in prison—a punishment that scares Rosie into trying to go straight, but inflames her lover’s sense of defiance. When Rosie gets released and pursues a job at a debt-collection agency, it’s obvious she’s trying to balance her own moral checkbook; meanwhile, Tommy plays hooky from his own job at the firm to attend the nearby trial of John Gotti, indicating that he has different things on his mind.

Like a low-budget, fact-based companion piece to Andrew Dominik’s Killing Them Softly, Rob The Mob describes the fallout of a low-rent hood’s attempt to shake down a cabal of high-rolling mobsters. Director Raymond De Felitta lacks Dominik’s technical pyrotechnics, but when Tommy decides to stick up a Mafia stronghold with an Uzi he only barely knows how to use, he generates a Dominik-esque level of tension, but differently pitched. Killing Them Softly was a mordant, movie-star-infested late-capitalist allegory, and never let viewers forget it, whereas Rob The Mob is an indie docudrama; in lieu of Brad Pitt and James Gandolfini, there’s Ray Romano and The Sopranos’ Joseph R. Gannascoli. And yet the smaller film arguably leaves a more aching impression, mainly because De Felitta and screenwriter Jonathan Fernandez aren’t using Tommy as a cipher to illustrate the futility of underworld upward mobility—rather, they really want viewers to care about him.

That isn’t always easy when it comes to characters played by Michael Pitt, a chronically neurasthenic actor who tends to lower the metabolism of any movie he appears in. But somewhere in the second season of Boardwalk Empire, Pitt conjured up a pathos that recalled the young Leonardo DiCaprio (whereas before, the only Leo-esque thing about him was his haircut), and his rain-soaked farewell remains the series’ emotional highpoint. What made Pitt so good on Boardwalk Empire was the sense that both the character and the actor playing him were gamely punching above their weight, and that underdog quality comes through in Rob The Mob as well: Tommy’s avarice and recklessness feel like the overcompensations of a loser trying to make his own luck.

It also helps that the typically low-energy Pitt has been paired with a firecracker actress. A young stage veteran who starred in the Born Yesterday revival and won a Tony in 2012 for Venus In Fur, Arianda doesn’t have a self-effacing bone in her wiry body, and she attacks her role like Rosie attacks Tommy in intimate moments: by playfully, passionately jumping at it, headfirst. Her expertise in what’s basically a screwball-moll role—the twist being that Rosie isn’t married to the mob, but rather dating the guy they’re after—exposes the strained skillfulness of Jennifer Lawrence’s performance in American Hustle. Arianda’s strong work doesn’t just break up the alpha-male monotony of the surrounding scenes of gangsters talking in hushed tones; it serves as a grace note in a movie that occasionally struggles to find the right key dramatically.

The trouble with Rob The Mob is coded into the particulars of its story: As the film toggles between Tommy and Rosie’s Bonnie-and-Clyde robbery campaign and the mafia hand-wringing about what to do about it, it feels like two movies in one, neither of them fully realized. The plot hinges on Tommy’s accidental recovery of a sensitive internal Family document that’s worth a lot more than the rings and watches he unsuccessfully tries to pawn after the heists. But even though this development is ripped from the headlines, it feels somehow artificial, with the raised narrative stakes intruding on what could otherwise be a compelling dual-character study. Similarly, the script’s attempt at media critique—the implication that crime reporter Cardoza (Romano) is endangering Tommy and Rosie by telling their story in his newspaper—is pokey and obvious, though the actor does his best in the role. While Rob The Mob doesn’t ultimately hold together, it isn’t for a lack of trying by the performers or the filmmakers—like Tommy and Rosie, it’s doing its damnedest.