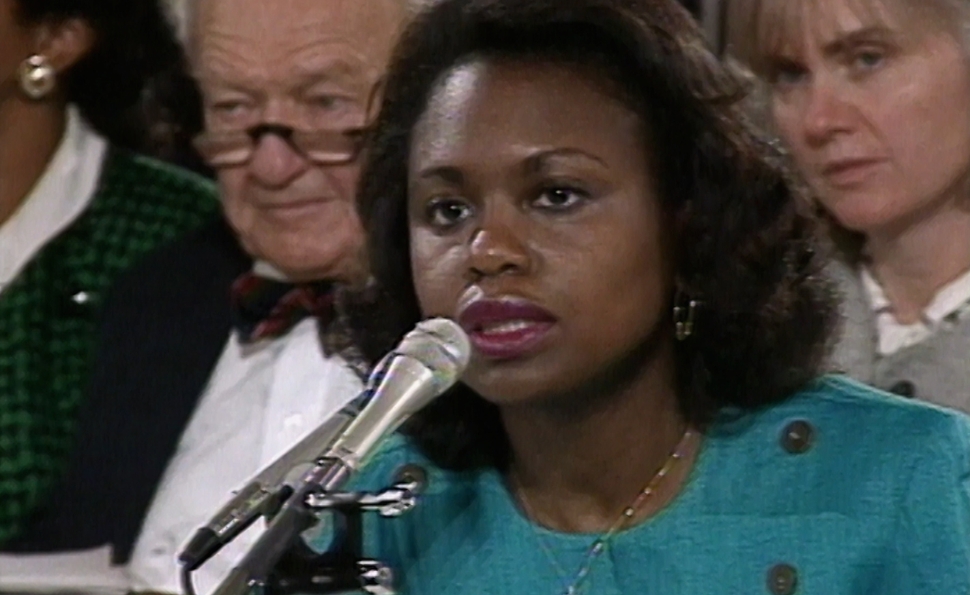 Anita opens with a close-up of an office telephone and the sound of a chirpy, Midwestern woman’s voice, leaving an unexpected voicemail message. “Good morning. Anita Hill, it’s Ginni Thomas,” says the voice. “And I just wanted to reach out across the airwaves and the years and ask you to consider something. I would love you to consider an apology sometime and some full explanation of why you did what you did with my husband. So give it some thought. I certainly pray about this and hope that you’ll help us understand why you did what you did. Okay. Have a good day.”

Ginni Thomas is the wife of Supreme Court Justice Clarence Thomas, and the Anita Hill she’s speaking to is the same Anita Hill who publicly accused Thomas of sexual harassment during his famously icky 1991 confirmation hearings. At the time, Hill’s testimony—with its candid discussions of Thomas’ alleged fixation on penis size and the presence of pubic hairs on Coke cans—kickstarted a massive media circus, a polarizing national debate about gender equality and workplace conduct, with character-assassination attempts aimed at both Hill and Thomas. Anita director Freida Mock uses that telephone message—left in 2010 on Hill’s voicemail at Brandeis University, where she’s now a professor—to remind viewers that, more than two decades later, there are still people who have the audacity to think Hill was lying about Thomas’ behavior. “That woman wants an apology?” the film implicitly asks. “Outrageous!”

But after opening with that admittedly outrageous, intriguing piece of audio—Hill says she initially thought it was a prank call—Mock never acknowledges that the message was previously covered in more detail by other media outlets, including The New York Times. The Times confirmed that Ginni Thomas really did leave that message in an attempt to offer “an olive branch,” but didn’t explain its timing; the story also noted that Hill forwarded the message to campus police, along with a request that it be shared with the FBI. All of that information may seem beside the point. But its absence in this film points out the lack of depth in what’s otherwise a compelling document of a chapter in American politics that can still bring viewers’ blood straight to high boil.

With a running time of just 77 minutes, Anita serves as a necessary, galvanizing reminder of how poorly and insensitively members of Congress—including then-Judiciary Committee Chairman Joe Biden—handled Hill’s testimony, and how that testimony ultimately paved the way for more women to feel comfortable speaking out about their own harassment. But it doesn’t provide enough rigorously reported context about what happened in 1991 to feel like anything close to a definitive portrait of the Anita Hill vs. Clarence Thomas saga.

Mock, the Academy Award-winning documentarian behind 1994’s Maya Lin: A Strong Clear Vision, makes excellent use of her extensive access to Hill, juxtaposing current interviews with footage from those 1991 hearings in which she spoke out against her former supervisor at, of all places, the Equal Employment Opportunities Commission, an organization charged with preventing workplace discrimination. “The issue became my character, as opposed to the character of the nominee,” Hill says of her grilling on Capitol Hill before a committee of all-male, all-white Senators. That grilling, by the way, makes some of the more preposterously grotesque episodes of House Of Cards seem benign by comparison.

“How could you allow this kind of reprehensible conduct to go on right in the headquarters, without doing something about it?” asks Republican Senator Arlen Specter, with no apparent awareness that his blame may be misplaced.

“Describe it, once again, for me, please,” Biden says at another point in the proceedings, forcing an obviously uncomfortable Hill to tell the pubes-on-a-Coke-can story. Based on her testimony, Hill wasn’t just harassed by Clarence Thomas, she was also harassed by the Senate Judiciary Committee. These exchanges, as squirm-inducing as they are, demand to be seen, especially by those too young to remember when all this first happened. Millennials raised in the Internet age, when sexist comments and slut-shaming behavior are often criticized online, may be surprised that this all happened so recently.

Anita also includes interviews with Hill supporters and journalists like Jill Abramson and Jane Mayer, co-authors of the 1994 book Strange Justice: The Selling Of Clarence Thomas, letting this movie tell a narrative with more than just a single voice behind it. But some of the questions raised in those interviews, particularly regarding the four female witnesses who would have corroborated Hill’s testimony but were never called to testify by the committee, aren’t addressed sufficiently. Did Mock reach out to any of those witnesses to see whether they’d be willing to speak on camera? Did she make a similar effort with Ginni Thomas, or even Clarence Thomas?

If she did, the movie doesn’t say. She seems content to leave Anita as solely the story of Anita Hill, who had the courage to raise her voice and never back away from what she always contended was the truth, even in the face of public attacks and death threats. That’s a good and worthy story, no question. But if Mock had dug deeper into that story, she could have made a documentary about a still-maddening moment in America’s not-so-distant history that was not merely good, but truly great.