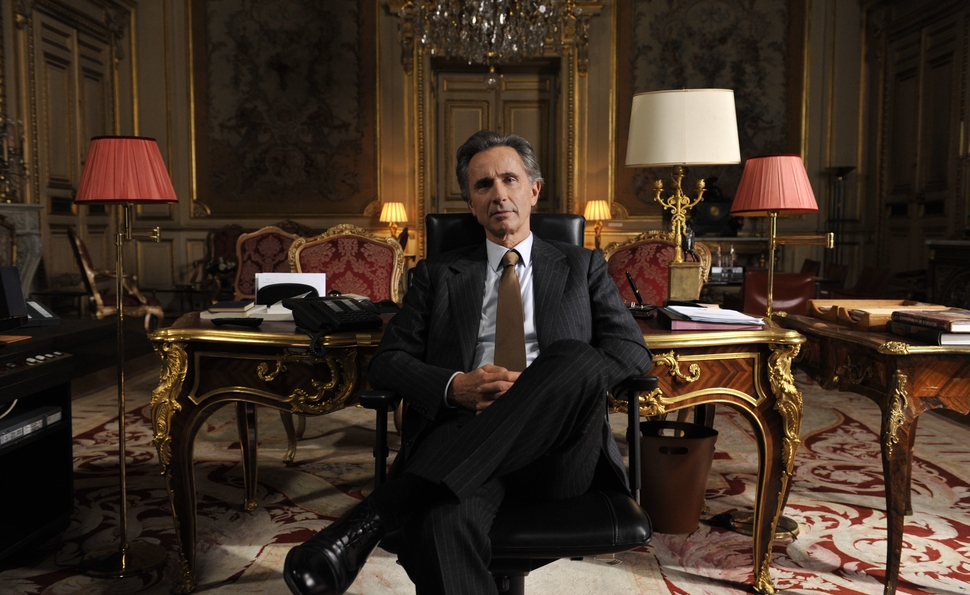 Thierry Lhermitte has been one of France’s biggest movie stars for decades, yet he remains almost completely unknown in the United States, as his films rarely make their way across the Atlantic. The reason is simple: Lhermitte is primarily a comic actor, and French comedies don’t tend to translate well. Nor has he worked much with the sort of auteurs who become festival darlings or critical favorites. His American equivalent is probably Steve Martin—not young, wild-and-crazy Steve Martin, but the aging, defanged guy who coasts through forgettable dreck like The Big Year and Cheaper By The Dozen. But just as Martin occasionally rouses himself to do something worthwhile, so has Lhermitte been cast in the title role of Bertrand Tavernier’s The French Minister, a shrewd political satire adapted from a popular French graphic novel. His energetic performance is by far the best reason to see the film, which should probably have been directed by somebody else; Tavernier has little flair for comedy (this may in fact be his first, though he’s been active since 1963), and nobody’s likely to confuse his dry effort with In The Loop.

Set in an indeterminate year from the recent past (George W. Bush appears to be president), The French Minister, like In The Loop, begins with a harried, clueless young man being hired as a minister’s aide. Arthur Vlaminck (Raphaël Personnaz, who’s roughly the French Adam Scott) meets with Minister Of Foreign Affairs Alexandre Taillard de Worms (Lhermitte) for an interview and is instantly put in charge of writing Taillard’s speeches, including one to be delivered at a forthcoming U.N. session concerning America’s plan to invade the fictional country of Lusdemistan (read: Iraq). Easier said than done, since Taillard changes his mind constantly, speaks in bizarre aphorisms and metaphors, and tends to reject multiple drafts of his speeches after merely glancing at a couple of pages for a few seconds. It’s mostly up to Taillard’s world-weary chief of staff, Claude Maupas (Neils Arestrup, whose work here won the 2013 César for Best Supporting Actor), to keep things running smoothly and un-ruffle the boss’ feathers.

In the graphic novel, Quai d’Orsay (the film’s original title), the characters are drawn as stylized caricatures, thereby ensuring a constant sense of absurdity; Taillard looks like Richard Nixon crossed with that weird rubber face Alec Baldwin wears at one point in Beetlejuice. Tavernier makes no attempt to find a visual equivalent, shooting the film in a conventional naturalistic style. (One exception: Taillard always enters rooms with such speed and force that loose papers fly all over the place as he strides by. It’s a great running gag, and the movie needed a lot more ideas like it.) The dialogue, meanwhile, is too pointed to be hilarious—the graphic novel’s author, Antonin Baudry (who also co-wrote the screenplay) worked for former real-life Minister Of Foreign Affairs Dominique de Villepin, and his story is a lightly fictionalized account of his actual experiences. Consequently, The French Minister is neither as uproarious as something like In The Loop, nor as insightful and despairing as Pierre Schoeller’s superb 2011 film The Minister, which never got a U.S. release. It’s just a whole lot of political blather that never ignites into comedy or drama.

At least Lhermitte is having fun. Now 61, he bulldozes through his scenes as if he were half that age, giving Taillard a sense of smug entitlement comparable to that of 30 Rock’s Jack Donaghy, though Lhermitte doesn’t have nearly as many good lines. A scene in which he rants for several minutes on the importance of a firm, non-mushy tip on a yellow highlighter is the film’s comic, uh, highlight, thanks primarily to the manic conviction with which Lhermitte delivers this ludicrous argument. (Arestrup does fine work in precisely the opposite register, though the role is too thinly conceived to allow for a genuinely great performance, César notwithstanding.) If nothing else, it’s a good opportunity for non-French-speakers curious about Lhermitte to see him with subtitles. Another chance may not come around for a while.