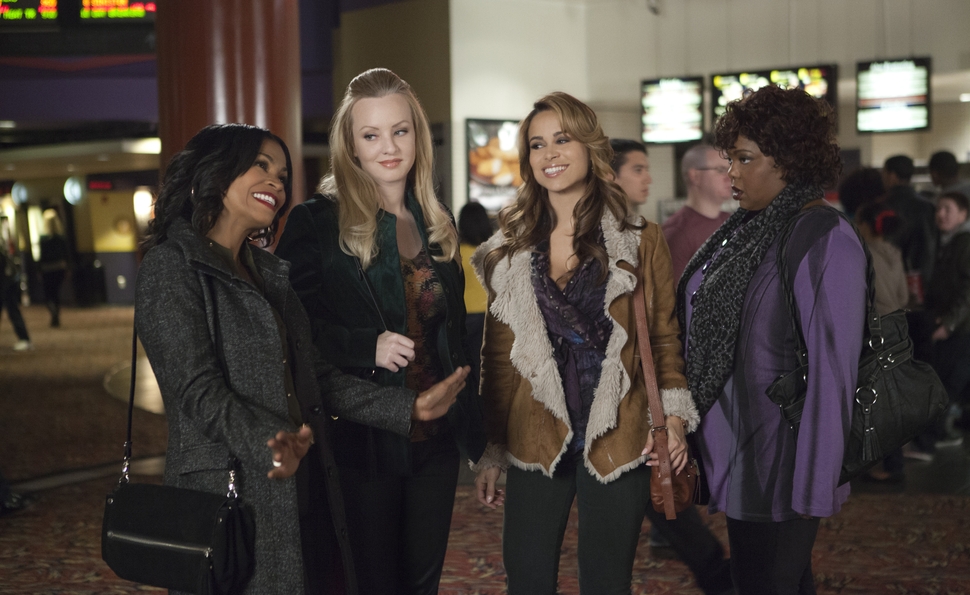 Tyler Perry is unafraid to address the most daring social issues of our time, as long as those social issues reside squarely in the distant past for most people. The third of his three 2013 films, A Madea Christmas, deals with what he inexplicably seemed to imagine was the charged social issue of the moment: interracial marriage. His latest, The Single Moms Club, similarly treats single motherhood as if it were still an exotic notion that invariably invites waves of scowling judgment from those who can’t process the idea of unmarried mothers. While it’s true that single parenthood is still controversial for some of the population, it’s unlikely to attract the kind of bug-eyed shock it engenders here; in one scene, a school administrator receives a group of single moms with a stuttering, stammering, open-mouthed disbelief that suggests she’s never encountered one of these mythical creatures before, let alone five in a single room. At this rate, it will only be 15 or 20 years before Perry makes a movie tentatively asserting that gays and lesbians are people, too.

The Single Moms Club, Perry’s latest Madea-free endeavor, centers on a quintet of single mothers from diverse racial, class, and ethnic backgrounds. The five are brought together by the faculty of a prestigious private school after their children are found tagging and smoking. Clearly, only one thing can bring this disparate band of single mothers together: being forced to spend the night in a haunted house where they must hash out their differences while evading ghosts and goblins. Instead, the school proposes only a slightly less preposterous, novel solution: forcing these single mothers to chair the school’s big dance and fundraiser.

The titular quintet includes the puzzlingly named publishing maven Jan Malkovich (Wendi McLendon-Covey), an uptight, classist, somewhat racist executive whose sneering co-workers stop just short of explicitly informing her that they are discriminating against her because she has a child. Then there’s Jan’s best friend Hillary (Amy Smart), a fragile housewife coping poorly with her divorce and the loss of her lavish lifestyle; aspiring author May (Nia Long); short-tempered but big-hearted waitress Lytia (Cocoa Brown); and sexy Esperanza (Zulay Henao), who must keep her yearlong relationship with her hunky bartender boyfriend a secret, lest she invoke the wrath of an evil ex-husband. How evil? He dramatically smokes cigars, the official accessory/vice of rich douchebags in films like these.

In keeping with Perry’s well-wrought mythology, the males in Single Moms Club are neatly divided between sneering men in expensive suits who delight in making life more difficult for single moms, and salt-of-the-earth types who work with their hands and have the sinewy muscles, soulful eyes, and pure hearts of romance-novel hunks. The ever-modest Perry casts himself as one of those hunks, a teddy bear of a man who fixes May’s car, returns her purse, and doggedly pursues her until she realizes he’s impossibly perfect for her. Meanwhile, the wonderful Terry Crews is the film’s sole redeeming facet as Branson, a jacked-up goofball hopelessly infatuated with Lytia; his irrepressible energy gives the film an all-too-brief comic spark that dissipates whenever he’s offscreen.

The remarkable thing about Perry’s filmography is that it would take little for him to improve as a filmmaker. Writing a film with a male character who wasn’t all good or all bad, but rather, a combination of the two (like how people are in real life), or a passable visual style, or an adequate score, would all represent great steps forward for Perry. Yet he refuses to budge beyond a state of borderline amateurism. On some level, that makes sense: Why mess with a formula that’s made him one of the most successful filmmakers alive? If what he does always works commercially, what does it matter if it almost never works creatively?

At this point, however, even Tyler Perry seems bored and exhausted by his own shtick. To its credit or detriment, Single Moms Club cannot muster up the energy to be as insulting and offensive as Perry’s previous two films, A Madea Christmas and Temptation: Confessions Of A Marriage Counselor. Moms isn’t as overtly, aggressively sexist as most of Perry’s films, which also makes it a lot less distinctive and memorable. And it certainly doesn’t include anything nearly as memorable as A Madea Christmas’ ghost-themed sex-play involving Larry The Cable Guy.

But Single Moms Club feels suspiciously like a glorified pilot for a television show, with good reason: In January, Oprah Winfrey’s OWN network ordered a series based on the film, though the movie already feels so much like a sub-par television show that adapting it for the small screen seems redundant. In that respect, Single Moms Club doesn’t just feel like bad cinema; it doubles as bad television, too.