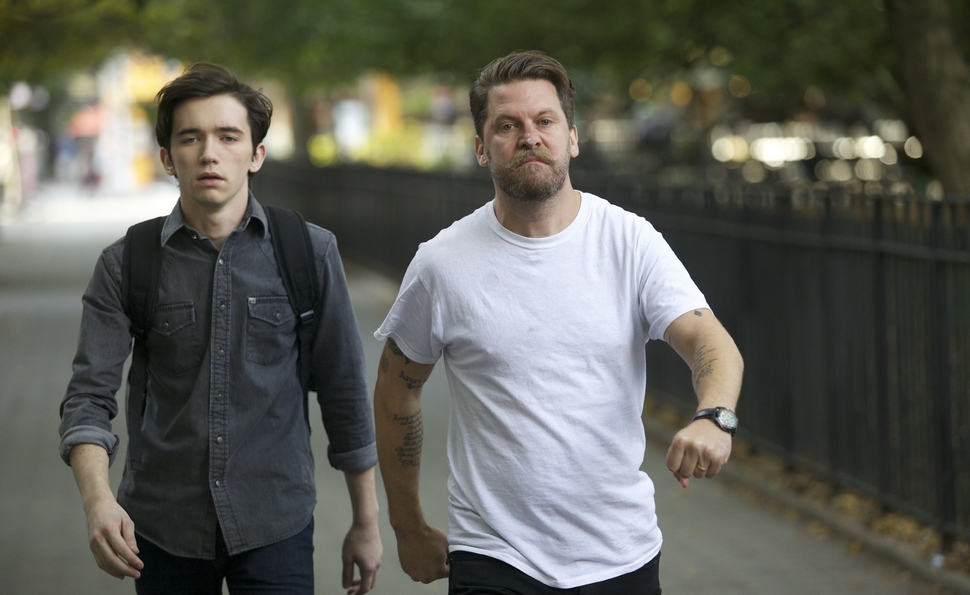 How To Be A Man

Nothing about the description of How To Be A Man induces confidence. Mark (Gavin McInnes), an ex-comedian with a pregnant wife, discovers he has breast cancer and decides to record life lessons for his son-to-be, teaching him how to fight, drink, pick up girls, and otherwise do stereotypical man-things. He recruits Bryan (Liam Aiken), the 22-year-old son of an old flame, to videotape him. The two bond over guy humor and recreational drug use, eventually teaching each other—wait for it—how to be a man.

That sounds pretty dreadful in concept, but in execution, it’s worse. This film brings a resolute lack of wit and a numb stupidity to stereotypical concepts like mid-life crises and regressive gender stereotypes. For all its burble about toughness, How To Be A Man doesn’t even have the elementary courage of its own hackneyed formal conceit. The film is supposed to be structured around Mark’s video transmissions to his son, a concept that seems to call for a found-footage approach—or at least for some sort of play with the space between what Bryan records and what the audience sees. But the film within a film is all but ignored in the interest of running through a series of stupid setpieces: Mark quits his advertising job in an excess of egotistical bombast. Mark’s wife calls him a child. Mark picks up girls. All with a minimum of invention, and a maximum of banal crudity.

The crudity is supposed to be winning. A scene where Mark tells Bryan (loudly, with hand motions) how to perform oral sex gets a standing ovation from the assembled bar patrons, who are presumably meant to cue the viewing audience that this is some wild, awesome writing and acting. The truth, unfortunately, is that the writing is flabby and tedious, and McInnes’ delivery has little charisma or charm. The film is like being stuck in an elevator with a boorish drunk for an hour and a half. The fact that the boorish drunk gives a wink every so often to let viewers know that yes, boorish drunks are really irritating, doesn’t salvage it; it has the reverse effect.

Most of the boor’s spouting has to do, as the title says, with being a man—how to be tough, how to wow women, how to take risks and follow a dream. Much of Mark’s advice is patently poisonous, and he just about wrecks his life, which would seem to undercut his status as testosterone guru. But it doesn’t. Instead, the good things Mark does are part of being a man; the bad things are simply a failure to be manly enough. Thus, Mark’s advice to act like a dick and threaten people lets Bryan jettison his uptight roommate, whose main, unforgivable sin is being kind of freaked out that Bryan was using heroin in their apartment. Mark’s fashion advice leads Bryan to ditch his funky hat and appealingly schlubby clothes for bland preppy blah, à la Ally Sheedy’s transformation at the end of The Breakfast Club.

The path to being a man, then, is narrow and fraught: No silly hats, no expressing interest in astrology, no drinking wine instead of beer. Certainly, no homosexuality: The film’s one gay character is an abusive cocaine dealer, and physical affection between men is treated as a scandalous joke. How To Be A Man isn’t so much a how-to guide as a frightened list of anxious proscriptions.

The source of that anxiety isn’t hard to locate. Both Bryan and Mark at different points suffer humiliating beatings at women’s hands, and beyond that lingers Mark’s fear that the womanish illness of breast cancer has doomed him. Both the beatings and the breast cancer are played for laughs, not because the film sees fear of femininity as ridiculous, but because men with women’s diseases, or men beaten up by women, are feminized, and therefore funny. A morbid, snickering, terrified misogyny runs through the film like a sad trail of fart jokes. Toward the end, Bryan, following Mark’s dictates, imagines the girl he’s trying to pick up as disgusting and diseased; loathing women gets him sex, and makes him a man. Masculinity appears, for the filmmakers, to be based on fear, hate, intolerance, and mediocre bathroom humor. In short, How To Be A Man is an insult to men, to women, and to everyone else.

GoWatchIt: Buy. Rent. Stream How To Be A Man