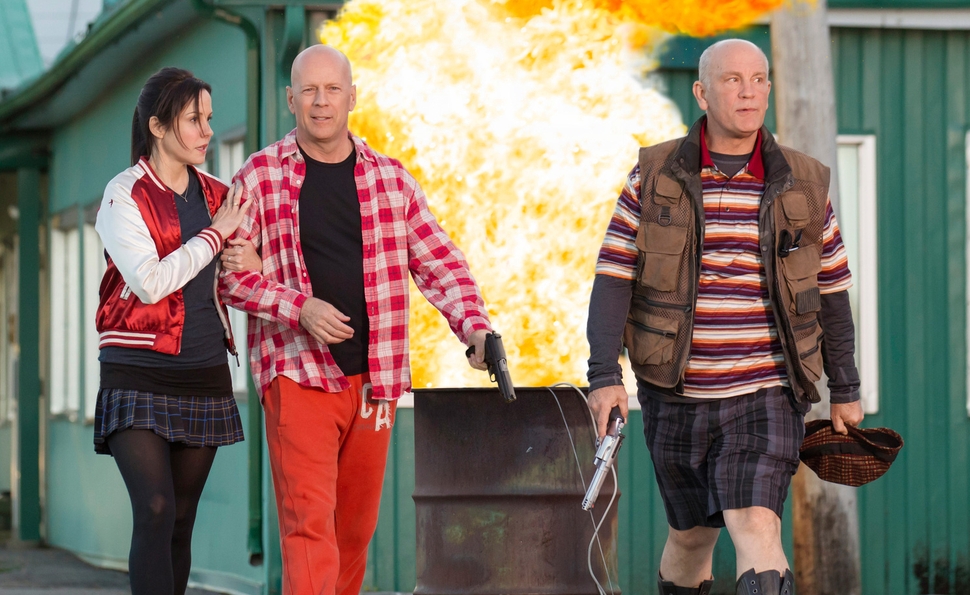 In 2010’s RED, retired CIA specialist Frank Moses (Bruce Willis) and pension caseworker Sarah Ross (Mary-Louise Parker) launch one of the creepiest romantic relationships in modern action cinema, which is a high bar to hurdle. When Frank’s black-ops past comes back to haunt him, he decides his enemies might target Sarah based on his mildly positive phone conversations with her, so he kidnaps her, knocks her out, keeps her tied up, hauls her into danger rather than out of it, and mercilessly patronizes her for protesting, until she eventually falls for him. It’s the exact same plot as Pedro Almodóvar’s Tie Me Up! Tie Me Down!, except with more gunfire, and without the faintest pretense that there’s anything wrong with abducting a woman in hopes that Stockholm Syndrome will set in hard.

The sequel, RED 2, fashions RED’s Frank/Sarah “papa knows best, baby” subplot into a gimmick, then mechanically repeats it for nearly two hours. The cycle goes like this: Sarah is bored with Frank, but still excited by the danger surrounding his old profession. So when a document turns up on Wikileaks implicating him in a notorious plot dating back to 1979, and various intel groups once again start trying to kill or capture him, Sarah is thrilled by the opportunity to help hunt the people responsible. Time and again, she asks questions about the past, or tries to get involved in the battles of the present. Each time, Frank shuts her down, lies to her, or tells her he’s keeping her ignorant to protect her. Then his old spy-games buddy Marvin Boggs (John Malkovich) treats her like an adult who’s ready to be involved in her own protection. Whereupon she usually screws everything up: accidentally firing a gun, crashing a car, tipping Frank’s hand in the middle of an op, or otherwise being a dolt. “You don’t give fire to a kitten!” Frank snarls at Marvin when he lets Sarah have a handgun, and the movie seems determined to prove him right.

It’d be easier to ignore this creepy-yet-boring running gag and focus on the action if the film did as well. RED is an action film with comic elements, largely good-natured ribbing at the expense of its super-spy protagonists, who gripe about their age but still put the new batch of black-ops whippersnappers in their place time and again. RED 2 is a comic film with action elements, and the comedy is dumber and more malicious. Poor Sarah can’t catch a break; every time screenwriters Jon and Erich Hoeber let her do something right, she has to humiliate herself immediately, often while her cooler, more capable romantic rival Miranda (Catherine Zeta-Jones, as a Russian agent Marvin calls “Frank’s Kryptonite”) looks on with catty superiority.

The focus is much more on Sarah, Frank, and their repetitive, ugly dynamic than on the giddy elements that made the first film trashy fun. RED, based extremely loosely on a Warren Ellis comics miniseries, mines its charm from the idea of a bunch of irascible near-senior-citizens leaving their retirement homes to whip out the heavy weaponry and kick ass. It’s a subversive take on the usual youth-is-king message of Hollywood films, and it’s joyously pulpy, particularly in Malkovich’s role as the goofy, pig-toting, explosives-addicted casualty of a government LSD experiment, and in Helen Mirren’s Victoria, a British MI6 vet who can rock an evening gown and a .50 cal with equal aplomb. 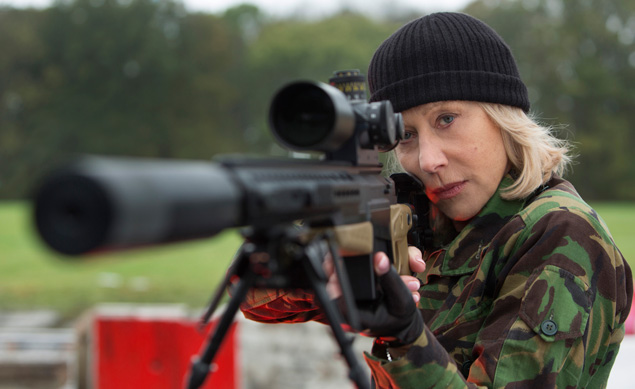 RED 2 ditches most of the aging humor and plays the premise straight, making Frank, Marvin, and Victoria into undistinguished generic heroes. There’s almost no charm, and none of RED’s amused pauses for senior-citizen reflection. Willis seems bored; Parker mugs outrageously to compensate. Marvin has been toned down into a quiet straight man who exists to mollify Sarah and set up gags; Victoria’s ex-KGB lover Ivan (Brian Cox) is barely in the film. Victoria has changed the least, and she gets some of the best lines and the best action sequence, but her characterization still isn’t as daring, playful, or pointedly incongruous.

RED 2 does bring in new elements rather than just flattening the old ones. Byung-hun Lee plays a dapper killer hired to take down Frank; for some reason, he’s described as the world’s best assassin, even though all his attempts on Frank’s life are clumsy, crude, and ineffectual. But his solo action sequence is a winner, and his double-barreled car-chase/shoot-out/team-up with Mirren is RED 2’s biggest triumph. On the more venerable side, Anthony Hopkins co-stars as an institutionalized British academic with ties to the long-ago plot that gives the film its McGuffin. His genial yet menacing performance isn’t much of a stretch, given how often he’s played similar roles, but the part fits him like a pair of comfortable old boots, and it accesses a simultaneously warmer and edgier place that the rest of the movie isn’t ambitious enough to reach.

Instead, RED 2 is perilously close to a formulaic romantic comedy, with a predestined couple going around in predictable relationship-ruining circles while everyone else interferes and dispenses advice. Viewers who show up looking for over-the-top mayhem may suspect they’ve wandered into the wrong film. And as with so many romantic comedies, they may also feel that they’re expected to get deeply emotionally invested in the toxic relationship between two awful people who would both be better off if they parted company. Preferably, in this case, with fewer weak gags and more heavy-arms fire.