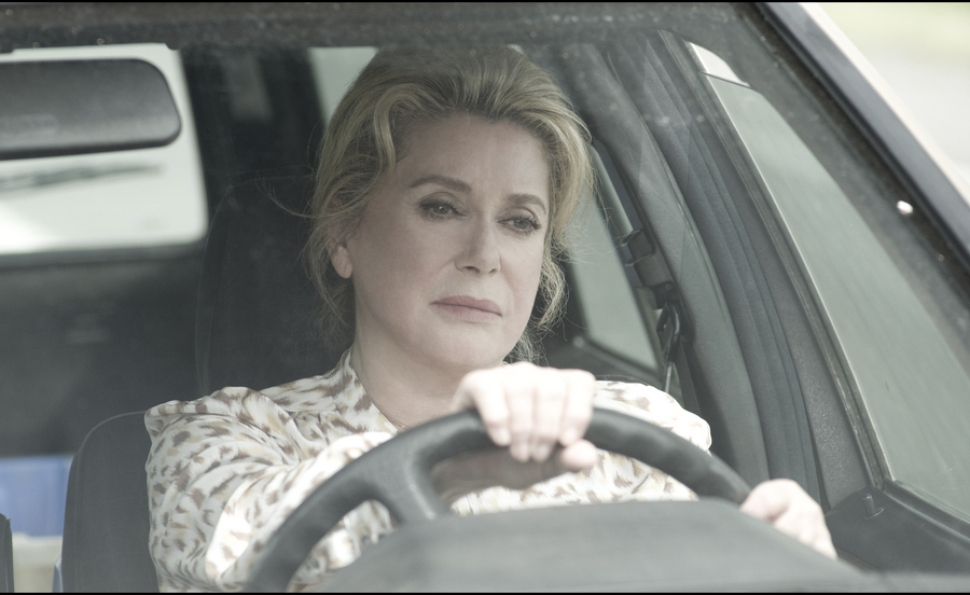 Catherine Deneuve doesn’t star in Emmanuelle Bercot’s shaggy seriocomic road movie On My Way so much as she wears it, draped around her shoulders like a loose-fitting shawl. Equally light on plot and purpose, Bercot’s meandering trifle is content to follow Deneuve rather than guide her to any place in particular, with the camera often trailing behind Deneuve like it’s just happy to be there. And yet, while her film abjectly fails in reconciling its modest ambitions with its ungainly story, Bercot was certainly right to trust that Deneuve’s compulsive watchability—and her palpable connection to the part—would be enough to anchor this otherwise weightless coming-of-old-age saga.

The film begins with a red flag—an opening shot of a despondent Deneuve staring at the ocean, queasily suggesting that Bercot’s third feature will be a Gallic redux of Lola Versus for the post-menopausal crowd. Fortunately, a shock-cut to a still photo of a young Deneuve at a beauty pageant more accurately augers what’s to come—Bercot’s open invitation to look at Deneuve through the lens of her faded glory isn’t only a challenge the actor is eager to confront, but also the most interesting facet of an otherwise-routine protagonist who’s desperate to break free from the self-imposed shackles of her past.

Deneuve is Bettie, a severe sixtysomething widow who owns a failing restaurant in a rustic Brittany village. There, she shares an apartment with her overbearing mother, who speaks predominately in withering exposition. Among her revelations: Bettie’s lover, who has long promised to leave his wife for her, has recently left his wife for a 25-year-old. Bettie is devastated (“I’m a woman in love who’s been betrayed! I’ve lost the only person who made me feel alive”), and abruptly walks out of her restaurant during lunch the next day, hopping into her car and driving around the unfamiliar countryside in search of an emergency cigarette. Her life in the rearview mirror, Bettie winds up on an impromptu road trip, drunk on the endless possibilities of the world just outside the boundaries of daily routine, and the shell of self-conception it forms around us.

While the early scenes are tonally unsure—Bercot awkwardly superimposes the dim domestic oppression of a Maurice Pialat film over a dormant comedy convinced that it can’t be funny until its protagonist is—the film ironically finds its footing when Bettie loses hers. As she hits the road, Bettie not only escapes her old life, but also the meaninglessly erratic style with which it was filmed. Bercot guides the character through a diverse series of encounters with strange men, introducing Bettie to a bouquet of narratives other than the one to which she has resigned herself since her husband’s death. She meets a widowed man with bloated fingers who rolls her a cigarette while sharing a lifetime of woes, and an unambitious local lug 30 years Bettie’s junior, but able to close his eyes and pretend they’re the same age while they have sex. (That amusing sequence completely naturalizes the “cougar” mystique, while also contriving to crown the immortal Deneuve with an enormous pink afro wig).

These non-professional actors (or “real people,” as they’re often called) force the film toward a certain naturalism, with casual interactions completely dislocating Deneuve from her legend. While Bercot repeatedly nods toward the roles Deneuve played for François Dupeyron and André Téchiné, casting such an established icon to embody Bettie’s adventure ultimately lets this otherwise-trite story blossom into a heartening (though not entirely convincing) reminder that life is never static. If Catherine Deneuve can still be surprising, it’s never too late for surprises.

Unfortunately, Bercot insists that Bettie’s reinvention has to be thoroughly reflected in the form of the film around her, and On My Way switches gears often and abruptly. Things seem to stabilize when Bettie is tasked with driving her daughter’s young son (the buoyant Nemo Schiffman, son of Bercot and her DP, Guillaume Schiffman) to see his paternal grandfather Alain (Gérard Garouste), but when, 80 minutes into the story, Bercot suddenly pivots toward romance, the added plot doesn’t feel like a detour so much as like a malignant growth.

While each of the chapters has its charms, the personal details of Bettie’s self-discovery are seldom as interesting as their broader implications. It’s rare and regrettably relatable to see a character funnel too much love toward someone at the expense of those willing to love them in return, but Bettie’s relationships with her daughter and her mother aren’t sufficiently developed to support the weight of her blunders. The mystery of why the regional beauty queen didn’t go to the Miss France finals is intriguing enough to sustain the film for some time, but Bercot is less interested in detailing Bettie’s pain than she is in solving it. For all the vitality Deneuve brings to the role, receiving encounters with a curiosity that’s seldom seen in a performer who’s seen it all, the story she’s forced to navigate is too intent on steeling itself against the inertia of aging for Bettie to feel independent of its agenda.

On My Way is unflaggingly preoccupied with its destination, a fatal flaw for a film convinced it’s a portrait of self-discovery. Careful to instill a palpably loose sense of rejuvenation in its gentle slide from drama to comedy, Bercot slowly reframes the central question of Bettie’s life from “How did I get here?” to “How do I go back?”, but the drama can’t survive a story that so transparently exists so Bettie can dismiss those inquiries and submit to the pleasures of the present. Though all the filmmaker’s previous features are about teenagers, On My Way resolves as Bercot’s most adolescent feature yet, blustering with the unearned confidence of its ideals. While Deneuve’s performance is so sweet with wisdom that the film drafts in her wake, this harmless star vehicle is lamentably in need of direction.