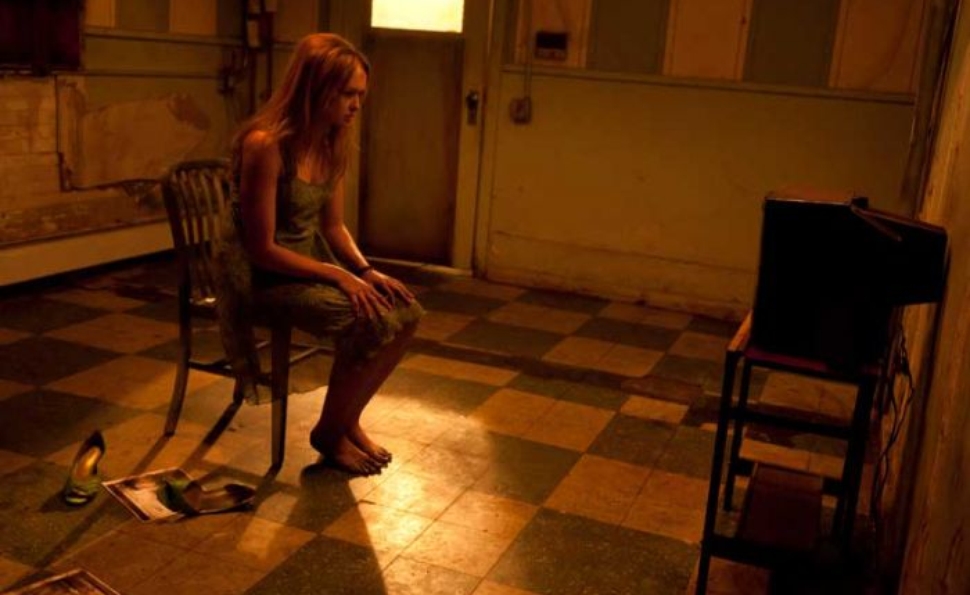 A jumbled mess of ill-fitting ideas whose few striking visual touches are lost in a sea of lamer ones, Dark House concocts a tale of clairvoyance, angels and demons, and a magically moving house, all without any care for how these disparate pieces might fit. Unlike Victor Salva’s Jeepers Creepers (and its equally sturdy sequel), his latest forgoes a streamlined narrative with straightforward mythology in favor of a more kitchen-sink approach. That undercuts most of the tension of his story about Nick (Luke Kleintank), a teenager who’s introduced visiting his mother in the loony bin on his 23rd birthday. Mom wants to tell Nick about his mysterious father because the voices in the wall command her to, but before that revelation can be sprung, Nick touches his mom and sees her engulfed in flames; he flees, and his vision comes true, as she’s burned to a crisp by whatever is whispering to her from a nearby air vent.

It turns out that, when Nick touches people, he can sometimes see their deaths, which freaks out some guys at the bar later that night, but not Eve (Alex McKenna), who immediately falls for him and—jarring cut to eight months later—is soon pregnant with his baby. That time-shift is as abrupt as the news that Nick has inherited a house out in the country that he’s never seen, but has been drawing, over and over again, since childhood. Salva establishes this series of supernatural events with maximum portent, full of diagonal shadows that corner his characters in the frame, and ominous camerawork that suggests malevolence around every corner. The problem is that his visual compositions are routinely flat and awkward, which doesn’t help sell what quickly becomes an avalanche of increasingly preposterous satanic developments.

Nick, Eve, and his friend Ryan (Anthony Rey Perez)—all three a blur of bland featurelessness—go looking for Nick’s new house, only to discover it’s a fabled place of evil that, legend has it, withstood a flood (the wrath of God?) and now exists in some unknown locale. After befriending local surveyors whose hey-we-can-help normalcy blatantly telegraphs their malevolent ulterior motives, Nick and company find the house out in the middle of nowhere. More troublesome, they also discover that it’s occupied by Seth (Saw’s Tobin Bell), a stringy-haired boogeyman with an army of similarly long-haired, axe-wielding maniacs who shuffle in unison after their prey like hunchback gorillas.

Is Seth intent on killing Nick? Or is protecting him from the house, and specifically, from entering its cellar, where Nick’s demonic daddy resides? Those questions, as well as the significance of the number 23—not to mention other biblical-prophesy gibberish—are addressed during a second half that piles on chases, gory murders, and twists about character identities and motivations, all with a clunkiness that’s unrelieved by Salva’s leaden orchestration. Dark House practically drowns under the weight of mismatched horror tropes, including a preponderance of loud-noise jolt-scares and idiotic character behavior. Ultimately even more galling than its lack of originality, however, is a finale that refuses to explain half of the story’s outstanding mysteries—an oversight that, whether by design or incompetence, makes the entire film all dreary tease, no payoff.