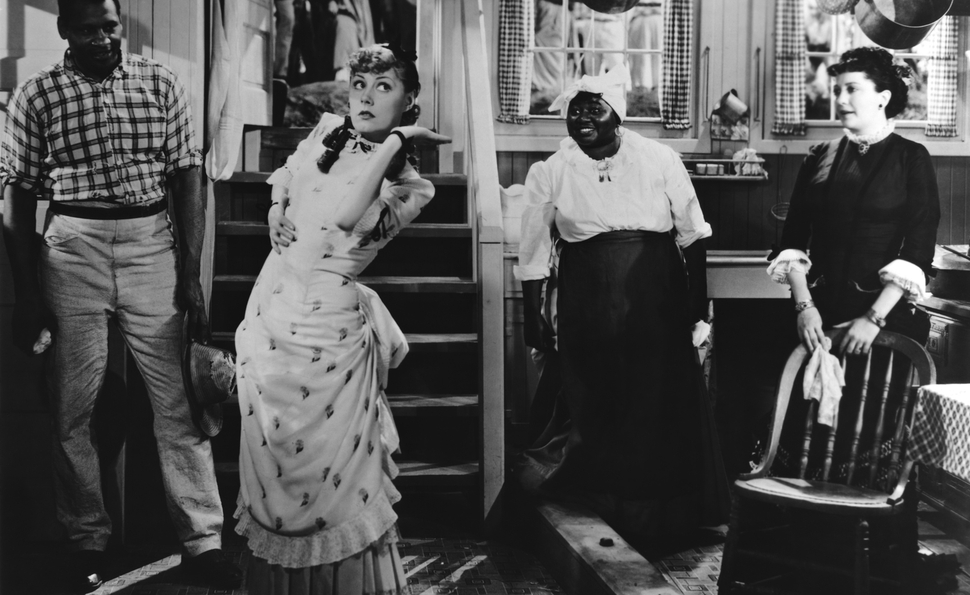 Theater-goers in 1936 had easy access to James Whale’s adaptation of Jerome Kern and Oscar Hammerstein’s landmark 1927 musical Show Boat, but since then, it’s been much harder to see. Universal produced the film, but then MGM bought it, with plans to do its own lavish version. As was the habit at the time, MGM wanted to keep any competing versions out of circulation. Show Boat appeared on VHS and laserdisc, the latter via Criterion, but never made it onto DVD in America until this new manufactured-on-demand release from Warner Archive. For a major film preserved in the National Film Registry, it’s seldom been treated with much esteem by home video.

Even now, it isn’t the easiest film to see clearly. Adapted from a book by journalist-turned-novelist Edna Ferber, Show Boat became the first Broadway musical to feature an integrated cast, an essential element since the play made race a central element, addressing it in ways that were daring then, but might now seem quaint, or even regressive, if considered out of context. Whale’s adaptation doesn’t shy away from race, either. One scene, where star Irene Dunne wears blackface to perform “Gallivantin’ Around”—one of three new songs added for the film version—is tough to watch. But it’s also part of a story unfolding in the background of Show Boat, a history of American song that traces how black music gets appropriated by white entertainers, then reworked for paying customers. Whale throws in a brief but significant shot of black audience members watching from the balcony, showing them from behind, and never cutting to their faces.

That isn’t the only moment that can be read as commentary, either. Much of the film’s cast had played in Show Boat already, either as part of the original Broadway run, or in subsequent productions. Paul Robeson didn’t originate the role of Joe on Broadway, but Kern and Hammerstein wrote it for him, and he played it many times. Here, he brings in his innate sense of gravity, whether speaking or singing. Early scenes find Joe quarreling with his wife Queenie (Hattie McDaniel), who calls him lazy. But Robeson’s performance refuses to slip into stereotype, and Whale’s direction of his big number, “Ol’ Man River,” underscores its despairing lyrics with cutaways illustrating lines like “body all achin’ and racked with pain.” What others call laziness is for him just a well-deserved step away from the grind.

Show Boat was an unusual project for Whale, who made his name (and a lot of money for Universal) directing horror films like Frankenstein, Bride Of Frankenstein, and The Invisible Man. It isn’t that far removed, however: All those films bear the mark of a director concerned with atmosphere and memorable visuals, and Whale brings the same skills to bear here, whether capturing the feel of life on the Mississippi in the last decades of the 19th century, or the smoke-filled music halls of Chicago at the turning of the 20th. Even with material as strong as Show Boat, Whale recognizes he’s making a film, not just a record of a stage production. (This didn’t escape the notice of The New York Times, which noted, “Here is one of the few musical shows which is not merely a screened concert. The picture has a rhythmic pace and a balanced continuity of movement which is as exceptional as it is welcome.”)

The strong source material doesn’t hurt, though, and neither do the assured performances of actors who know their characters inside and out. As Cap’n Andy, the patriarch of the cobbled-together family of steamboat workers and traveling players, Charles Winninger embodies the spirit of his show boat: genial, accepting, unable to see trouble even when it’s around the bend, and ill-equipped to protect anyone on board when it arrives. Much of the film’s opening action concerns trouble with Andy’s lead performers, Julie (Helen Morgan) and Steve (Donald Cook), a happily married couple who run into trouble with the law when a jealous engineer turns them over to the authorities for violating the South’s anti-miscegenation laws, since she hid her mixed parentage. After Julie and Steve leave the production, their jobs are taken over by Andy’s daughter Magnolia (Dunne) and Gaylord Ravenal (Allan Jones, best known as the romantic lead in the Marx brothers’ A Night At The Opera and A Day At The Races), a gambling drifter smitten with Magnolia. As the years turn on, the characters’ fortunes rise and fall, and the nature of American entertainment changes behind them.

As with the play, the most compelling drama of Whale’s Show Boat, and most of its best songs, belong to its first half. And while otherwise faithful to the source, this version, also scripted by Hammerstein, reworks the ending, writing Joe and Queenie out of the finale in the process. It remains an ambitious undertaking through the end, however, with a second half highlighted by Morgan’s heartbreaking performance of “Bill,” sung at a point when her character had descended deep into alcoholism, just as Morgan had in real life. (This was her final film appearance; she died five years later at age 41.) Show Boat throws most of its characters a happy ending, but it never loses sight of how ugly the business of entertaining with song can get, whether it’s for riverside audiences or under the bright lights of Broadway, or how many of the singers get lost and forgotten along the way.

The movie is the whole show here, alas, but at least it’s available again.