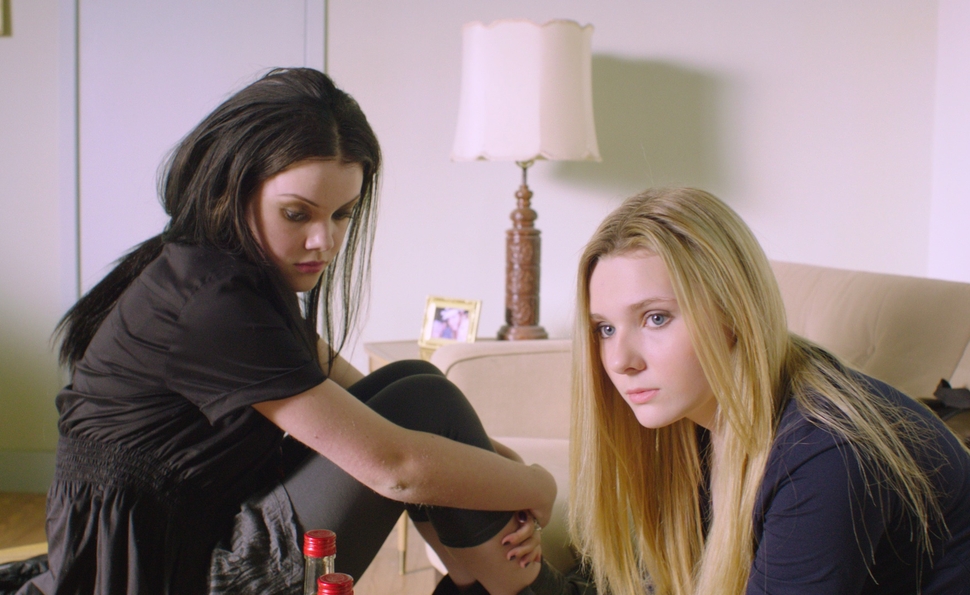 Mixing genres is just about the toughest cinematic trick to pull off, particularly for people whose last name isn’t Coen. Stanley M. Brooks’ directorial debut, made after 24 years of producing television films like Call Me: The Rise And Fall Of Heidi Fleiss, Behind The Camera: The Unauthorized Story Of ‘Three’s Company,’ and Gym Teacher: The Movie, tries to blend family melodrama and “dark quirk.” Surprisingly, Brooks somewhat gets away with it. Perfect Sisters isn’t that interesting as a whole, but there are moments—just a few of them—where audiences expecting yet another rote teen drama ought to rise from their VODaze and say, “Hey, I’ve never quite seen this sort of thing done this way before.” Considering the film’s provenance, that’s something of a victory.

High-school senior Sandra (Abigail Breslin) and her one-year-younger sister Beth (Georgie Henley) are incredibly close. They have their own private language, make up lies about themselves to tell the outside world, and are practically able to read each other’s thoughts. This bond of support is more necessary than with most siblings, as their mother Linda (Mira Sorvino) is an alcoholic, frequently out-of-work nurse well past the point of taking care of them or their much younger half-brother. As they move into yet another apartment with promises that “this time it will be different,” mom is soon too drunk to go to PTA meetings or her morning shift. After a humiliating Thanksgiving with the more put-together cousins, Linda brings home a hard-drinking, abusive new boyfriend (James Russo).

As things get worse, and Linda’s boyfriend gets grabby with Beth, the sisters realize just how powerless they are. Their biological father, shellshocked by memories of Linda’s drinking, has cut the emotional cord with his two daughters. Calls to help centers are fruitless, since all they have are hunches that “It’s going to get bad.” The girls decide the only logical thing they can do is kill their mother and collect the insurance money.

That last bit may sound like a surprise, but it’s even more so in the film, which takes a sharp left turn into a dark humor, particularly during the planning stages, when the girls are brainstorming different disposal methods. For a movie about a serious subject, it gets wacky. And yet this refusal to color within its genre’s lines keeps Perfect Sisters as watchable as it is.

While the scenes of verbal abuse and Mira Sorvino flopping around in her housecoat are indeed sad, a number of naturalistic moments of humor spring up, sometimes in the middle of one of these heavily dramatic scenes. The daughters still love their mother, and they recognize she’s beyond saving. Yet they can still crack jokes. They can still go to school and act like normal kids during the day, despite the horrors that await them at night.

These tonal shifts could potentially just be bad storytelling. (The flat lighting, cheap effects, and poor performances by the peripheral characters do the movie no favors.) But dismissing it as such may just be the safe reaction. A rowdy poker game with a Carl Perkins tune on the soundtrack, sandwiched between histrionics of Guiding Light proportions is, probably, a lot more like real life than viewers will care to admit.

Perfect Sisters eventually trails off into courtroom drama and begins to feel rushed. A detective with an eyepatch reads his lines as though he’s straight out of Reno 911! Still, the chemistry between Breslin and Henley is real. By the end of the film, the audience can see the world “their way”—not to the extent of Peter Jackson’s somewhat similar Heavenly Creatures, but enough that the story’s conclusion manages to be a tad touching, despite the over-the-top music raging on the soundtrack. Perfect Sisters may stand accused of being rife with tone-deaf stylistic choices, but the more positive spin is to call it a marginal film elevated, however inadvertently, by the strange specificity of its scenes. The word “perfect” in the title is an unfortunate move, but the film is certainly unique enough to stay engaging.