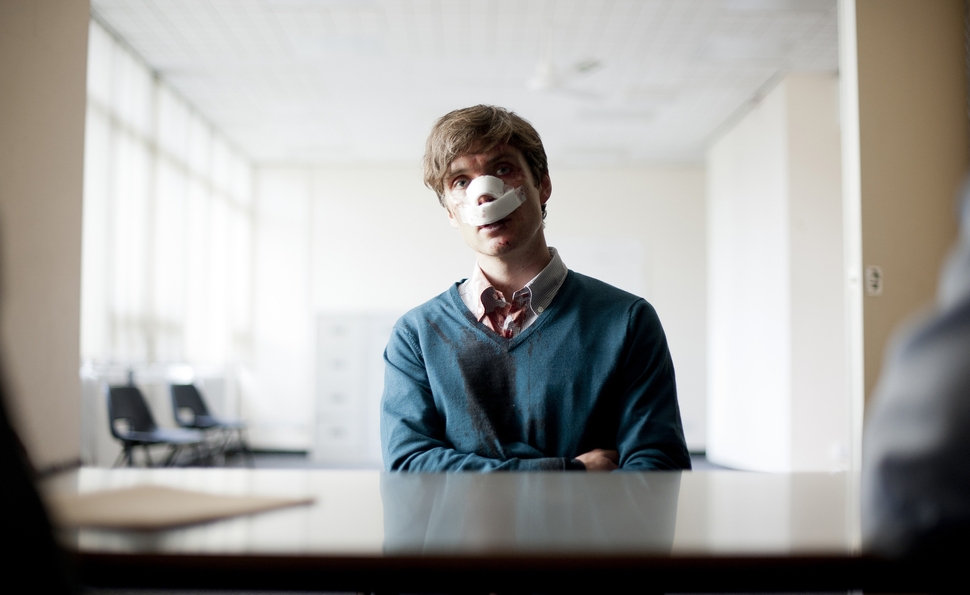 When Clueless appeared in 1995, much of its target audience didn’t recognize that it was a contemporary version of Jane Austen’s Emma, and the movie worked just fine whether viewers knew that or not. Likewise, it would be easy to watch Broken, which takes place in present-day England, and not be aware that it’s riffing on To Kill A Mockingbird—especially since the parallels in this instance are much more tenuous, mostly involving characters and their relationships rather than story elements or themes. There’s a good-hearted attorney (Tim Roth) with a teenage son (Bill Milner) and a pre-teen daughter (Eloise Laurence); they’re called Archie, Jed, and Skunk rather than Atticus, Jem, and Scout. (The names are the big giveaway.) There’s a mentally damaged young man (Robert Emms) who keeps to himself, though he’s first seen out washing the family car. And there’s a false accusation of rape, albeit minus any hint of racism, or a climactic trial. Just enough, in short, to serve as a distraction from the film’s own impressive identity.

Adapted from a novel by Daniel Clay (from which the Mockingbird conceit derives), Broken appears virtually plotless for a good long while, to its tremendous benefit. Skunk serves as the film’s primary motor—pestering her patient dad, hanging out with Jed in an abandoned trailer, and embarking on a tentative romance with a neighborhood boy (George Sargeant) who sweeps her off her feet by telling her she looks like a lesbian, then helpfully explains that he just means she’s ugly. (Their relationship beautifully captures the essentially antagonistic fumbling of small children striving to emulate the adult world.) Archie, whose wife left him years earlier, quietly gets involved with the family’s Polish nanny (Zana Marjanovic) after she dumps longtime boyfriend Mike (Cillian Murphy), a schoolteacher who’s a close friend of the family, and upon whom Skunk has a longtime crush. Just a host of sharply drawn, ordinary folks whose lives get turned upside down by the family across the street, consisting of a single dad (Rory Kinnear) with anger-management issues and his three obnoxious daughters, one of whom points at whatever innocent male she’s currently annoyed at whenever she gets into trouble.

That last thread, which also encompasses the sad fate of the Boo Radley analogue and his family, only becomes truly prominent in the last 20 minutes or so, at which point Broken pretty much breaks. What had been a lovely, gossamer-thin, anecdotal slice of life abruptly turns melodramatic and cruel, culminating in a garishly cheesy New Age finale right out of a Nicholas Sparks adaptation. But while this third-act meltdown badly damages the movie, it doesn’t erase the assured, preternatural confidence that first-time director Rufus Norris demonstrates before the material finally overwhelms him.

Like Sam Mendes, Norris made his name working on the London stage, but that isn’t telegraphed by his idiosyncratic sense of composition and rhythm, or the relaxed performances he coaxes from his ensemble cast. Narrative gets buried in an impressionistic whirlwind of fleeting images and offbeat, low-key interactions, with isolated shots popping up in unexpected places, and entire histories summarized in a single emblematic moment. When Archie, who’s been just barely flirting with the nanny, silently reaches out and puts a clothespin on her index finger—immediately following a comical scene in which Jed attaches dozens of clothespins to Skunk’s hair and face while she shrieks with laughter—it’s so casually electrifying that her subsequent invitation to join her in bed almost seems superfluous. Broken may someday be remembered only as a minor footnote in Norris’ career, but it’s already a career worth following.