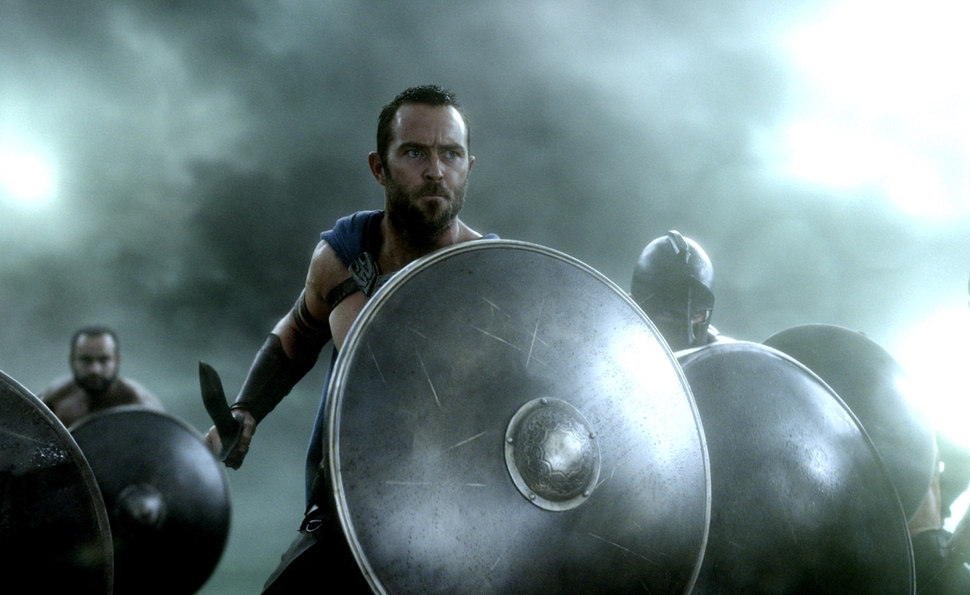 It’s difficult to overstate the impact and influence of the surprise 2007 blockbuster 300. Zack Snyder’s homoerotic blood orgy dramatically expanded the vocabulary of action movies, taking the green-screen innovations of Frank Miller and Robert Rodriguez’s adaptation of Sin City to brash, bold new places and establishing Snyder as a major commercial filmmaker. Like its fabled band of warriors, 300 has its own legend: the movie that came out of nowhere, triumphed, and transformed star Gerard Butler and writer-director Snyder into major figures. In the seven years since, Snyder’s sensibility—a surprisingly commercial cross between Leni Riefenstahl and Tom Of Finland, with a little John Woo thrown in—has gone from radical to de rigueur. So a 300 sequel/prequel/spin-off/follow-up is forced to compete with Snyder’s subsequent films and with the army of imitators that followed in the wake of 300’s success.

To compensate for this innate lack of novelty, 300: Rise Of An Empire—which Snyder wrote and produced, but didn’t direct—does what sequels have historically done, doling out more of the same in even greater doses. Rise Of An Empire tries to amp up levels of excess and spectacle that already bordered on the comically over-the-top and self-parodic. In the process, the film almost feels like a parody of a self-parody—and this after 300 inspired an inane parody in Meet The Spartans.

The film casts beefcake Sullivan Stapleton as Themistokles, a scantily clad warrior who leads a Greek battle brigade with an impressively low collective body-fat percentage in an all-out war against the forces of Persian glam man-god Xerxes (Rodrigo Santoro) and his terrifying ally Artemisia (Eva Green, playing wonderfully deranged). Artemisia is the only thing the film finds more terrifying than a dark-skinned man-god with the sexy slink of a young Mick Jagger: a sexually voracious woman who has betrayed her Greek heritage to fight for the Persians.

Rise Of An Empire is just as black and white in its worldview as its predecessor. It occupies a world devoid of moral ambiguity, where bad is always bad and good is always transcendently and transparently good. The film dopily fetishizes brute strength, brotherhood, and rippling muscles, with blood spurting hypnotically at the screen in three dimensions. Given the unenviable task of following Gerard Butler as the film’s center, Stapleton delivers a performance devoted largely to shouting inspirational speeches that make up in volume and hoarse, shouty intensity what they lack in eloquence.

Rise Of An Empire’s great strength lies in its immersive imagery and shameless spectacle. The filmmakers use innovations in 3-D technology to give battle scenes, particularly those at sea, a sense of depth and scope. Stormy tableaux seem to stretch out into infinity, dwarfing even the well-muscled, heavily oiled warriors who populate the film. The film feels epic in scope, visually at least, but the depth of its deep-focus composition is bitterly at odds with the flimsiness of its characterization and plotting. Rise Of An Empire makes smart, inventive, sustained use of 3-D for its setpieces, though its characters would need to be developed further just to qualify as two-dimensional. The breathtaking images wind up serving a regrettable, sometimes headache-inducing, and strangely negligible whole.