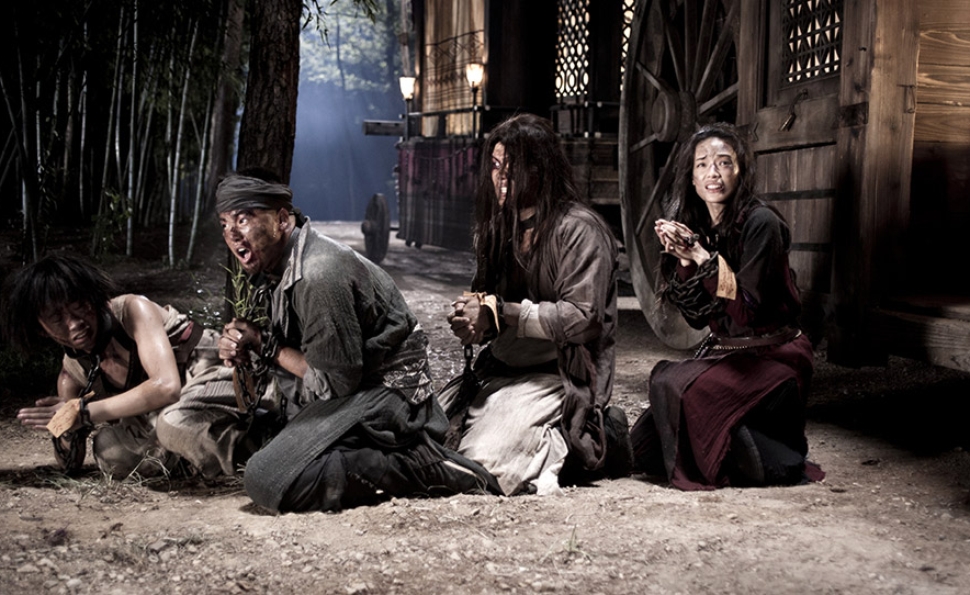 Journey To The West

Ten years ago, Hong Kong actor-director Stephen Chow achieved a sizable crossover hit with the zany Kung Fu Hustle, which grossed $17 million in America. (Until it got knocked out by Instructions Not Included in 2013, it was one of the 10 highest-grossing foreign-language films of all time.) Sensing an opportunity, Chow sprang into inaction, for some reason—he’s appeared in just two movies over the past decade (after starring in more than 50 between 1988 and 2004), and until now had directed just one, the saccharine boy-and-his-alien flick CJ7. Fans who’ve been impatiently waiting for him to make another grand-scale, knockabout action-comedy will be happy to hear that Journey To The West, Chow’s take on a much-adapted 16th-century Chinese novel, is much in the mold of Kung Fu Hustle and Shaolin Soccer, gleefully ignoring the laws of physics whenever they might get in the way of a thrilling setpiece. Those who think Chow’s performance tends to be the highlight of his movies, however, will be sorry to learn that he stays entirely behind the camera this time, allowing relative newcomer Wen Zhang to play the goofy hero.

Perhaps Chow figured he’s too old for the part, since Xuan Zang (Wen) is meant to be a novice demon hunter with as-yet-undeveloped skills. (Title notwithstanding, this entire movie takes place before Xuan Zang journeys to the West, covering only the first section of the novel.) When a small village built on stilts over a river is threatened by a gigantic fish demon, Xuan Zang does his best to subdue the beast with the principles of kindness and empathy he’s been taught, but gets shown up by a rival demon hunter, the fierce, pitiless Miss Duan (Shu Qi). After the two subsequently encounter and hold off a deadly pig demon, Miss Duan falls in love with Xuan Zang’s simple goodness; he’s wholly uninterested, however, viewing romantic love as an impediment to his quest for Buddhist perfection. Nonetheless, Miss Duan continues to pursue him as he seeks the advice of the long-imprisoned Monkey King (Huang Bo) regarding how the pig demon can be conquered, though neither Xuan Zang nor Miss Duan realizes how dangerous and crafty this seemingly meek, insignificant demon (currently trapped in human form) can still be.

As a director of kinetic slapstick action, Chow remains unparalleled. The opening river sequence, for example, transforms its village-on-stilts into a series of inclined planes, allowing for the sort of precise physical comedy that mostly went out with the silent era. At the same time, though, he still likes his humor extremely broad, and isn’t above, say, capping a teeter-totter gag by having an enormous woman suddenly appear, and use her massive body as the ultimate catapult. His cartoonish approach always benefited from his own blustery onscreen persona, and Wen, with his boyish diffidence, just doesn’t possess the same natural charisma. Between battles, it’s up to Shu Qi (Millennium Mambo, The Transporter, Tai Chi 0) to keep things lively, and Miss Duan’s desperate efforts to win Xuan Zang’s love—which at one point have her using magic to appear more stereotypically feminine—are frequently embarrassingly retrograde rather than funny. She’s far more entertaining as an unrepentant badass.

Journey To The West rallies nicely in the home stretch, when the Monkey King shows up, taking on not just the heroes, but such other hilarious demon hunters as Prince Important (Show Lo) and Almighty Foot (Zhang Chao Li), both of whom are aptly named. Chow’s go-for-broke sensibility has been sorely missed, and a tale of demons is the ideal context for the gravity-defying, logic-impaired stunts he favors. The good news is that this film cleaned up in Asian territories upon its release last year, making the sequel implied by its finale (which would involve an actual journey to the West) almost a sure thing. (The film’s full onscreen title is Journey To The West: Conquering The Demons, but Magnet is marketing it without the subtitle that sets this up as an installment in a series.) Chow is said to be considering playing a role in the next one, as well as directing. We can only hope.