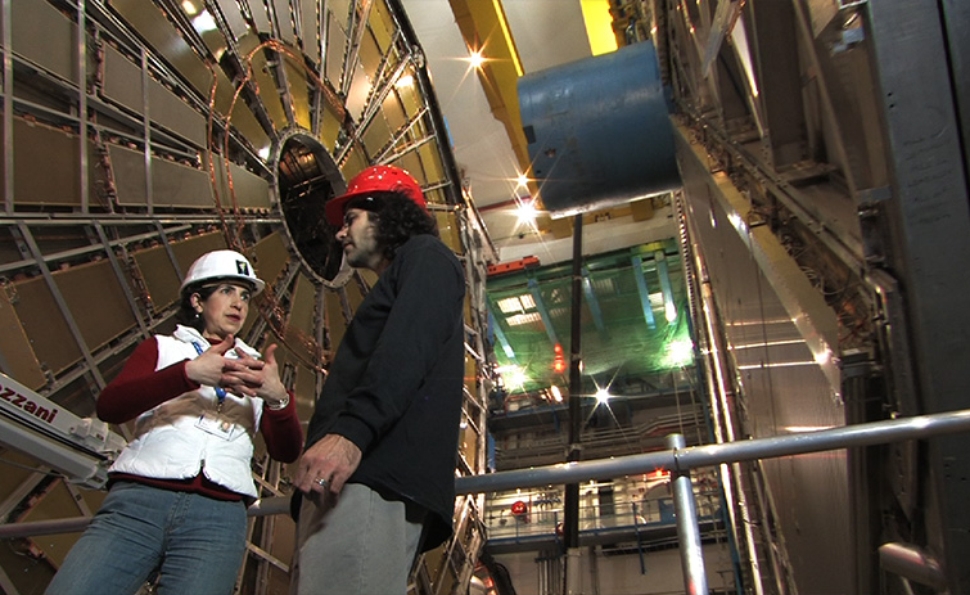 As anticipation builds for the Large Hadron Collider to fire its first beam on September 18, 2008, a physicist in Mark Levinson’s riveting documentary Particle Fever likens the LHC’s construction to the building of the pyramids, or the moon landing. But for the layperson, those previous efforts are far more tangible: We can gawp at the pyramids or the moon-landing footage and imagine the astounding innovation and toil that made them possible. Yet we can’t gawp at data, much less understand the mathematical models that are being tested by the LHC, which stands as the largest and most expensive scientific experiment mankind has ever undertaken. So while there was intense interest and excitement around the firing of LHC’s first beam, it was mainly limited to the people who grasped its implications.

Beyond gaining access to this immense machine and being present for its dramatic unveiling and complicated aftermath, Particle Fever’s main value is accessibility. Levinson and producer David Kaplan have experience in both particle physics and mass entertainment: Levinson earned a doctoral degree in particle physics before embarking on a career doing ADR work in post-production houses, and Kaplan is currently a professor at Johns Hopkins who has also hosted and consulted on science programs for History Channel and National Geographic. So the filmmakers have a crucial understanding both of the complexities of LHC-related science, and how to communicate those complexities to a general audience. They succeed in turning abstract concepts into tangible ones, and letting viewers share the excitement. When Peter Higgs, the Nobel Laureate responsible for the theorizing the elusive Higgs boson (or “God particle”), makes an appearance late in the film, it’s hard not to get choked up a little.

Following six physicists, drawn equally from the separate-but-compatible theoretical and experimentalist fields, Particle Fever heads straight for the tunnel that houses the LHC on the French-Swiss border near Geneva, and the massive structures built up around it. When the film opens, the 10,000-plus scientists and engineers that contributed to this international effort are finally seeing it come to fruition, and the entire field of physics hangs in the balance. Their hope is that the LHC—a giant ring that collides proton beams in an effort to re-create the conditions that existed just after the Big Bang—will accomplish nothing short of unraveling the mysteries of nature. Confirming the Higgs boson is tops on the agenda, but there are other important related issues, too, like whether we’re part of a structured supersymmetry, or a multiverse.

The chosen subjects are all thoughtful and personable, and Levinson and his collaborators—including famed editor Walter Murch, who cuts the film into rousing form—capture a mood somewhere between giddiness (one speaker likens the first beam to a 6-year-old anticipating a big birthday party) and anxiety, given that the LHC data could make or break their careers. As much as any documentary since Errol Morris’ A Brief History Of Time, Particle Fever excels at expressing advanced scientific theory through graphics that are simple, attractive, and utterly approachable. The film does everything it can to build a bridge between physics nerds and their wedgie-giving counterparts, which is important not only in making Particle Fever the crowd-pleaser it is, but in helping justify an expensive undertaking that’s been questioned for having no applicable value. It may not yield a more efficient toaster, but understanding the fundamentals of the universe is made to seem worth a few billion dollars.