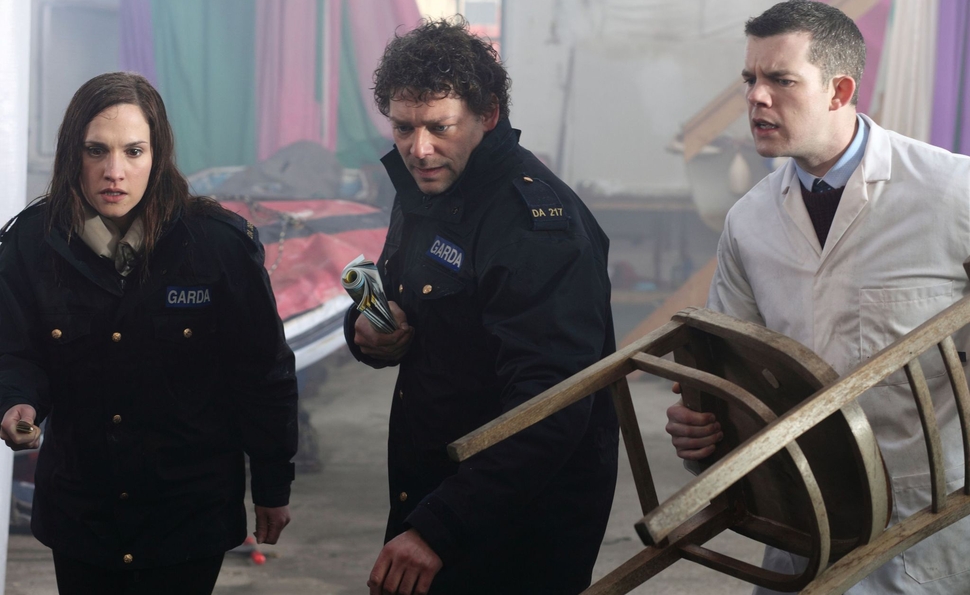 The horror-comedy Grabbers suggests what might’ve happened if, in The War Of The Worlds, the alien invaders were repelled by booze instead of the common cold—and if they made the mistake of landing in Ireland. That’s a cute premise, but it’s cute in an obvious way, rooted in a broad, corny joke: The Irish, with their reputation as heavy drinkers, are the best folks on Earth to take on the task of getting righteously pissed to save the world. That’s about the level where Grabbers’ humor stays, too: cartoonish and predictable. Tentacled bloodsuckers aside, the movie could pass for a cozy Local Hero/Waking Ned Devine-style charmer, about a small town where everyone is colorfully grumpy. Even the monsters in Grabbers aren’t all that terrifying; they’re more like another quirky neighbor the heroes have to endure.

Grabbers has its moments, thanks in large part to a winning cast. Ruth Bradley stars as Lisa Nolan, a Dublin cop spending a few weeks on the provincial Erin Island, a remote garden spot under the protection of her fellow Garda, alcoholic Ciarán O’Shea (Richard Coyle). Bradley is such a stickler for the law that on her first night in town, she throws O’Shea in jail for public intoxication. He’s such a pill that he constantly teases Nolan, telling her she should be with nerdy local marine ecologist Dr. Smith (Russell Tovey). The two have an enjoyably contentious rapport, spurred on by lightly comic turns from some first-rate character actors, including Bronagh Gallagher and David Pearse as the sourpuss married couple who own the town’s central pub.

But compared to other, similar offbeat monster movies, Grabbers is under-realized. It isn’t as smartly plotted or funny as Tremors, nor as politically charged as The Host. As soon as the hatchling incarnations of the aliens wash up on the beach—first discovered by a cackling old coot—the action kicks in and stays doggedly, relentlessly on a straight line, with the only real twist being that once the creatures’ weakness is discovered, O’Shea volunteers to stay sober while Nolan binges. Story-wise, the crisis is largely a way to get O’Shea and Nolan to discover a newfound respect and affection for each other. And while they’re likable characters—especially Nolan, who has the oddly appealing quality of being both upbeat and humorless—the couple isn’t so engaging that they can make “Will they or won’t they?” into the core of a movie.

The biggest issue with Grabbers, though, is that it’s more slick than squirmy. Aside from a few good low-fi gross-out scenes—such as one where Dr. Smith uses his forceps to yank out one of the aliens’ tongues, and another where a blitzed Nolan uses a staple gun to subdue some of the smaller critters—Grabbers has the look and style of a big-budget action epic, not a scrappy little indie-horror. Director Jon Wright, to his credit, makes a relatively low-budget film look like it came right off the storyboards exactly as intended, with no compromises or work-arounds. But that approach, coupled with Christian Henson’s oppressively blaring score, works against Kevin Lehane’s more low-key script about funny drunks and wiggly monsters. Early in the film, Nolan tells O’Shea why she came to Erin Island, shrugging, “It’s always the quiet places where the mad shit happens.” Grabbers isn’t quiet enough or mad enough.