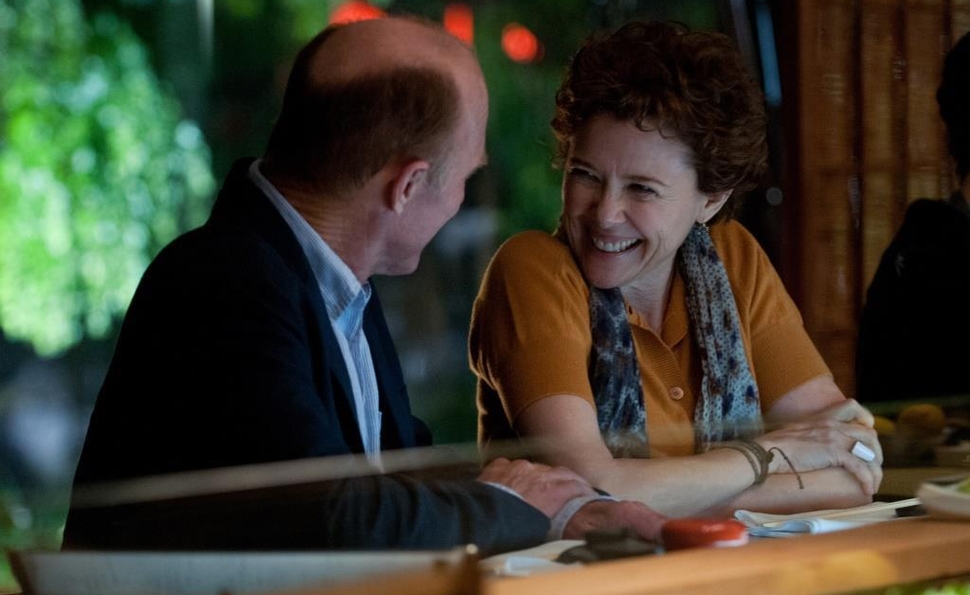 The Face Of Love

The Face Of Love begins by depicting a relationship that’s much too blissful to last long in a movie. Nikki (Annette Bening) and Garrett (Ed Harris) have been married for 30 years, yet still seem as giddy in each other’s company as newlyweds, with never a cross word between them. So when the bellhop at their Mexican vacation spot warns them about a strong riptide, it’s clearly time to wave goodbye—though it’s hard to imagine which one of them is doomed, since both actors are top-billed.

Garrett drowns, as it happens, but Ed Harris isn’t going anywhere. Five years later, Nikki, still very much in mourning and living only for her adult daughter, Summer (Jess Weixler), visits the Los Angeles County Museum of Art and encounters her dead husband’s perfect doppelgänger: same face, same body, same voice, same interests (art, primarily). This man’s name is Tom (Harris again, naturally), and Nikki, without telling him about the uncanny resemblance, quickly initiates a romance, doing her best to re-create all her experiences with Garrett. Were Tom more of a movie buff, the poster of Hitchcock’s Vertigo prominently displayed in Nikki’s house might tip him off. As it is, he just gradually recognizes that something weird is going on, especially when Summer unexpectedly shows up and reacts to Tom as if he’s a zombie (while conveniently not screaming anything that would let him know what the problem is).

Of all the possible angles to take with this intriguing what-if, director Arie Posin (The Chumscrubber), who co-wrote the screenplay with Matthew McDuffie, has chosen by far the cheesiest. Rather than diving into the maelstrom of conflicted emotions both parties would feel in this situation, he postpones the big reveal until the last few minutes, putting most of his energy into cheap suspense. Nikki hides the one photo of her with Garrett that she kept around after he died… but the cupboard in which she placed it has a door that doesn’t close properly. Will Tom stumble onto it? Robin Williams turns up as an ostensibly platonic friend of Nikki’s who gets jealous when she tells him she’s seeing someone, but the character’s true function is just to show up unannounced all the time to use Nikki’s pool, increasing the risk that somebody who knew Garrett will spot Tom and give the game away. If Tom the doppelgänger were replaced with, say, Frank, the escaped criminal from Labor Day, virtually nothing would need to be altered.

However, apparently nobody informed Bening that The Face Of Love would be a dopey quasi-thriller rather than a devastating character study. Nikki’s initial reaction upon encountering Tom, and her subsequent tentative courtship of him, is some of the most astonishing work Bening has ever done—she throws herself quivering body and agonized soul into the psyche of a woman who can barely even process what she’s seeing, yet feels compelled to charge forward anyway. In Anthony Minghella’s directorial debut feature, Truly Madly Deeply, Juliet Stevenson plays a particularly wrenching scene in which her dead lover (Alan Rickman) reappears as a ghost; Bening somehow manages to suggest an equally violent reaction lurking just beneath the surface of an exterior that Nikki’s struggling to keep relatively composed, and she sustains it for ages. Harris, by contrast, isn’t given the opportunity to do much more than look puzzled (and paint, prompting unflattering comparisons to his Jackson Pollack) until the final reel, at which point the movie completely cops out. Whether it’s worth seeing a film solely for one amazing performance is a personal judgment call; for those who take that particular leap once in a while, though, here’s a worthy candidate.