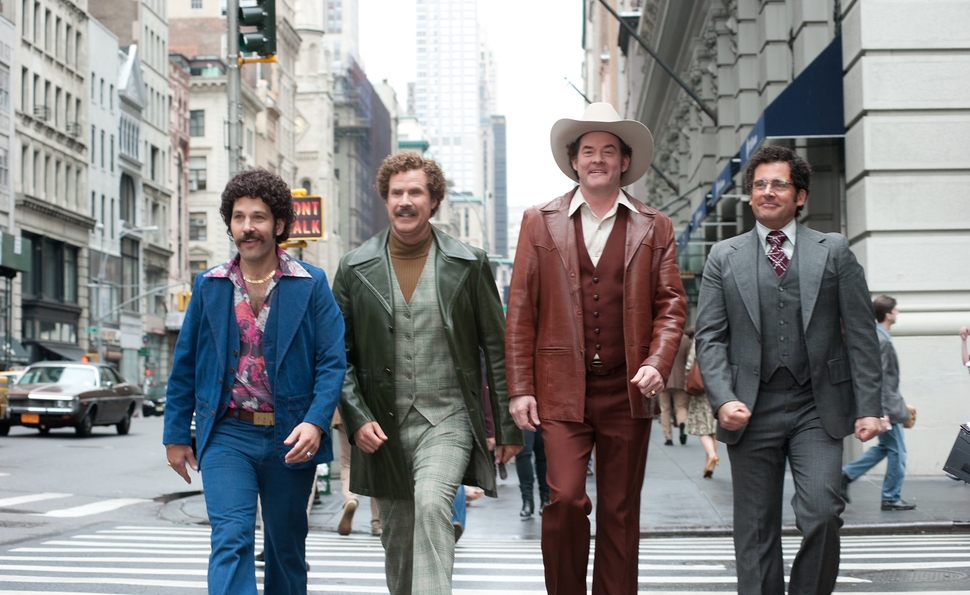 It’s difficult to explain to anyone who wasn’t around back then just how different things were in mid-December of 2013, when the first, PG-13-rated, theatrical cut of Anchorman 2 was released. Gay marriage was illegal in Texas. Jay Leno’s death-grip on The Tonight Show remained unbroken. The nation was still reeling from the surprise release of Beyoncé’s self-titled fifth album, only days earlier; we hadn’t yet had time to be properly skeeved out by Jay-Z’s cannibalistic breakfast commentary in “Drunk In Love.” No one had even seen the trailer for the new Godzilla yet, for crying out loud. Well, not the one that features Bryan Cranston yelling.

It was a different time.

Writing for The Dissolve, Matt Singer proclaimed the more innocent Anchorman 2 of that more innocent age to be perhaps too much of a good thing. Its 119-minute runtime is expansive, for a comedy. The new, even more expansive, inexplicably* R-rated version, in theaters for one week only, is being promoted as including “763 new jokes.” It is unclear whether that joke in the marketing copy is included in the total. Anyway, we measure our rude spells of corporeal existence on this too-seldom-mustached Earth in years, not in jokes. Perhaps this is why we are sad. Perhaps this is why we are unfulfilled.

Frankly, viewers should be grateful. “It’s too long” is a lazy, boring critique of anything that isn’t a bookshelf or a set of blinds. When a movie is paced properly, its runtime is irrelevant. A ticket to the 165-minute The Dark Knight Rises doesn’t cost any more than a ticket to the 86-minute Frances Ha. Many films play better when they’re longer. Probably not Anchorman 2.

Anchorman 2-2 extracts, objectively, 20 percent more of a viewer’s lifespan than its fleeter ancestor did, and certainly it does not feel, subjectively, like 20 percent richer an experience. But how much of that is because it is, for the overwhelming majority of its intended audience, a reprisal? Of a sequel? From two months ago?

This is where the calculus breaks down, because the audience for this film is unlikely to have confined its investment in the Anchor-verse to a mere five hours and seven minutes—the combined runtime of Anchorman (a reasonable 95 minutes), its direct-to-video outtakes assembly/companion picture Wake Up, Ron Burgundy (93 minutes, which is a lot of leftovers, but okay), and Anchorman 2 (December 2013 regular version, 119 minutes, pushing it).

The Adam McKay-Will Ferrell director/co-writers/star brain trust, which graduated to features with the first Anchorman in 2004, and followed up with Talladega Nights, Step Brothers, and The Other Guys, prizes re-watchability above all other attributes of comic filmmaking: characterization, stakes, coherence. Thus, viewers who fully intended or remained at least notionally open to watching the extant Anchorman 2 a second or fifth time will now find their devotion and/or drunkenness rewarded with a veritable Interstate Highway System of Roads Not Taken. Except now, they have been.

None of the restorations alter the movie’s scope or tone. The most substantial and welcome of the adds is a big musical number, “A Big, Big World/Gay For A Day.” It’s performed in the halls of Global News Network, the nascent 24-hour cable outfit that hires arrogant, dim-bulb newsman Ron Burgundy and company in this sequel, set mostly in the early 1980s, when you could smoke crack on live TV without fear of lingering legal repercussions. Choreographing and shooting this sequence, which features the most fluid camerawork in the movie, must’ve taken weeks of work. It’s odd that McKay excised this from the film’s first release rather than, say, the movie’s biggest comic misfire, when Meagan Good, playing Ron’s African-American boss and lover, brings him to meet her family for dinner. As ever, Ron is the target of the joke in the sequence that follows, wherein he attempts to ingratiate himself via his own clueless perception of jive-talk. It’s still fairly tasteless, if only because Good’s character doesn’t dump him immediately afterward. Mercifully, this part of the movie has not been extended.

There are a boatload of six-of-one alternate jokes, which show off this crew’s already oft-demonstrated improvisational powers, if nothing else. “I’ll be the first lactose-intolerant news anchor” is now “I’ll be the first left-handed news anchor,” for example. Nearly all of them are funnier than that. Brian Fantana, the second-chair newsman played by Paul Rudd, shows off a different but just-as-insane selection of condoms. The replacement of his “Sex Panther Powers ACTIVATE!” with “Sex Panther, I summon thee!” is an unequivocal improvement. And Ferrell and Good’s sex sequence actually seems to have been shortened.

But most of the padding comes in the form of shaggier versions of bits that were already here. Indeed, almost every bit now limps on past its natural lifespan, as in The Wolf Of Wall Street. Perhaps the authors of the 1980s-set Anchorman 2 are making a similar point about rampant excess. Naturally, this would not have been possible in Anchorman 2’s initial release, which preceded the trail-blazing Wolf Of Wall Street in cinemas by an entire week. It was a different time.

(*This film is rated R for “Language, drug use, sexual material and references,” but the crack-smoking scene is no more explicit than in the PG-13 version, and nudity and profanity are absent-to-negligible. It’s a very, very soft R, if that matters for any reason.)