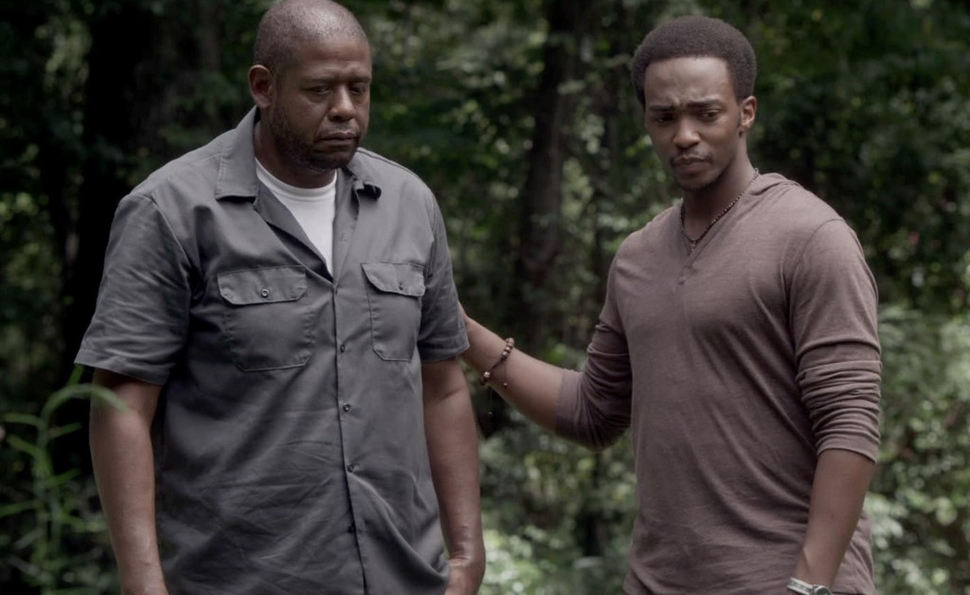 Actors aren’t always the best custodians of their talent, and in the high-profile cases of Nicolas Cage and John Travolta, they’re often the worst. Cage and Travolta have made enough terrible creative choices throughout the years to suggest their careers—and the public—might be better served if an impartial panel could choose their roles, instead of leaving the matter up to them.

Travolta’s Battlefield Earth co-star Forest Whitaker is another brilliant, Oscar-winning actor who consistently chooses dubious roles, but his failures tend to be less high-profile than Cage’s or Travolta’s. This is both because an awful lot of Whitaker’s misfires have washed up in the low-stakes, low-visibility world of direct-to-video schlock, and because some, like The Butler, have been mistaken for films of quality and significance.

It’s safe to assume no one will make that mistake with Repentance, a deranged, quasi-mystical melodrama of redemption and hope that’s being leaked out into theaters during the cinematic release-date equivalent of the dead of night. Since winning the Best Actor Academy Award for 2006’s The Last King Of Scotland, Whitaker has lent his presence to the likes of The Air I Breathe, Ripple Effect, Powder Blue, Winged Creatures, and A Dark Truth—all dour, portentous dramas or thrillers in roughly the same vein as Repentance. Ripple Effect even shares a director (Philippe Caland) with Repentance. At this point, the barely released Forest Whitaker redemption drama is practically a low-rent subgenre unto itself.

Repentance opens with brothers Tommy (Anthony Mackie) and Ben (Mike Epps) drunk in a car one very late, rowdy evening when something cryptic happens. The film then flash-forwards four years, to find Tommy as the image of serene domesticity. He’s married to gorgeous yoga instructor Maggie (Sanaa Lathan, in a thankless, fire-the-agent wife role) and has leveraged stints as a therapist and life coach into a thriving career as a self-help author, who uses his own story of overcoming what happened that mysterious night to help others on their spiritual journeys.

Tommy wants to escape his history, but trouble follows him everywhere he goes. First, Ben unexpectedly shows up after being released from prison, and begins hollering to Tommy about the dark secret he’s been carrying around for years, one that’s sure to tear his brother’s happy world asunder, should it ever be revealed. Could this dark secret have something to do with the drunk-driving scene that opened the film? Or, in a shocking twist, did the film begin four years before the main action takes place for no reason whatsoever?

Tommy’s life of contentment takes another dark turn when Angel Sanchez (Whitaker), a brooding, mentally ill construction worker, shows up at one of Tommy’s book signings, leaving behind sadness, spiritual yearning, and batshit craziness like a spectral cloud. From his introduction, Angel seems exactly like the kind of deranged nutcase who would commit some sort of horrible crime. But when Ben demands a big chunk of change from his more responsible, socially acceptable brother, Tommy reluctantly concedes to private life-coaching sessions with Angel to help him deal with his grief over his mother’s death, and her reappearance in his life in ghostly form. And, in a lapse in judgment, Tommy is okay with meeting with this intense, troubled stranger in lots of remote places where no one could find him, if, say, he was tortured and murdered.

Repentance continually teases a twist, a dark secret for Tommy that’s so shocking and dramatic that unless Tommy somehow managed to both single-handedly plan and carry out the 9/11 attacks, it’s doomed to be anticlimactic. Repentance likes to imagine it traffics in shock, but it’s the kind of movie where everyone and everything is exactly as they appear. Tommy turns out to be exactly the stiff, hypocritical phony he always seemed to be. It’s similarly impossible to imagine anyone being surprised when Angel begins behaving like a male version of Kathy Bates in a downscale, dumbed-down second-generation riff on Misery. Epps, meanwhile, isn’t a character so much as a plot point. Ben exists solely as the keeper, then dispenser of his brother’s great secret, which is every bit as predictable and preordained as everything else in this movie. Repentance lurches unsteadily to a foregone conclusion that isn’t the riveting twist the filmmakers imagined: It’s the final, predictable disappointment in a film full of them.