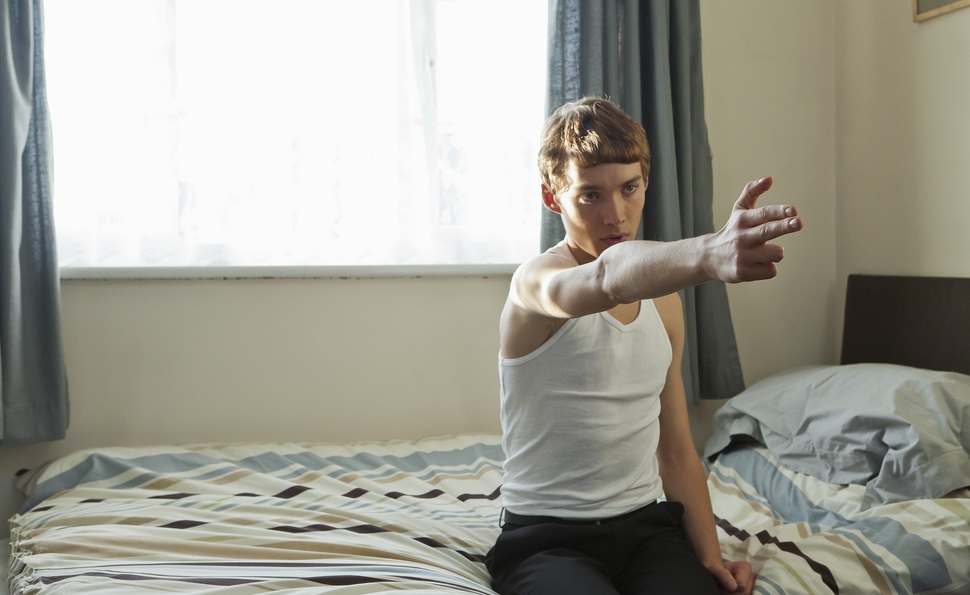 Sarah Clayton (Joanne Froggatt) questions high-school-aged Mark (Jamie Blackley) about why he stabbed his friend John (Toby Regbo).  The scene is functional, a teaser, drawing the audience in with the promise of excitement, blood, scandal, and mystery. But it’s also thematic, framing Mark as a clinical issue to be solved. He is presented, first of all, as a deviant, and the rest of the film is devoted to investigating the root of his deviance. Mark isn’t a person; he’s a scandal, an occasion for the audience to express horrified titillation and titillated horror.

In other words, this is an exploitation film. Where Anita: Swedish Nymphet focused on the problem of “nymphomania” and Reefer Madness focused on the problem of marijuana, the updated occasion for moral panic here is the Internet. Mark is a healthy, charismatic young British lad, good at football, popular with the girls. But he’s obsessed with online chat partner Rachel (Jaime Winstone), an obsession that quickly turns dark, then weird, then weirder. Rachel’s abusive boyfriend threatens Mark online, then murders Rachel. Then MI5 gets involved. (Online too, of course.)

All these Internet interactions are presented as oddly hyper-real melodrama. Mark and his interlocutors talk out loud as they type, and the camera switches back and forth between them, so that instead of one guy staring at the screen, viewers get a doubled drama. Mingus Johnston as the evil boyfriend, Kevin, is particularly over the top, mugging and snarling like a parody gangster. But MI5 agent Janet (Liz White) is also coldly ridiculous, somewhere between bland mannequin and buttoned-up queen-bitch noir temptress.

Offline, the film’s main relationship is between Mark and John, Rachel’s bullied brother. In its focus on this close, intimate, confused bond between two young people, not to mention its based-on-a-true-story pedigree, U Want Me 2 Kill Him? recalls Heavenly Creatures. But where Peter Jackson was fascinated with his female protagonists’ relationship first, and the crime as an outgrowth of that, U Want Me 2 Kill Him? doesn’t much care about how the boys feel about each other; the film’s mechanics are devoted almost entirely to obscuring their interactions. Ostensibly, this is because Mark doesn’t himself understand the relationship. But really, it seems like the confusion is meant to create plot surprises for their own sake. As in an Agatha Christie novel, the investigation must end with a twist, and information is ruthlessly manipulated without regard to character or probability in the interest of the final gasp of surprise.

Christie’s books make little pretense of being anything other than puzzles; The Murder Of Roger Ackroyd doesn’t have any particular moral lesson besides “murder is wrong,” which presumably most readers knew going in. U Want Me 2 Kill Him?, though, is trying for more than ingenuity. It’s trying, in a schoolmarmish way, to tell viewers about the Internet, about teen loneliness, about youth today. The pretense of concern, combined with the cynical manipulation of the plot for cheap thrills, is both transparently hypocritical and broadly repulsive. Too calculated for campy exploitation fun, the film settles instead for the dreariness of shocked revelation, a kind of onscreen tabloid journalism.

(Currently on VOD. In theaters March 14.)

GoWatchIt: Buy. Rent. Stream U Want Me 2 Kill Him?