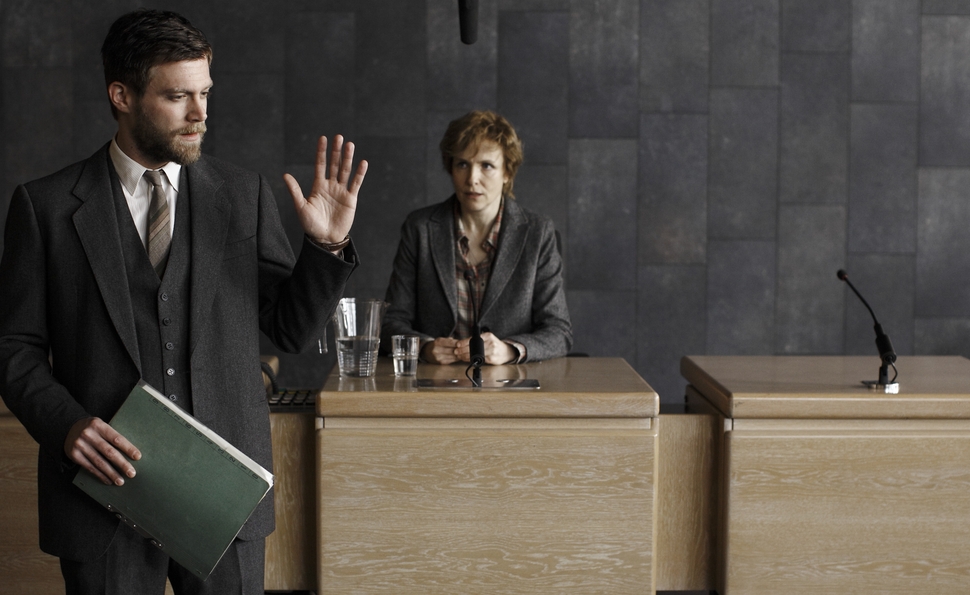 Two Lives lays its duplicitous nature right out there with its title. The yin-yang implication, however, is far from the actual tenor of the piece. Georg Maas’ adaptation of Hannalore Hippe’s novel stems from a strange footnote in Cold War history, and rather than just explain what went down, the film chooses to tease it out with a series of onion peels. More than once, the film intentionally disorients the audience, but eventually, the layer folds back into place. Despite some mawkish moments, this portrait of where espionage and domesticity collide is a unique take on typical John le Carré turf.

It’s 1990 in Norway, and Juliane Köhler’s Katrine appears to be a happy woman at the center of a busy family. She works at a print design company, her husband is a naval captain (and has the cool coat to prove it), her unmarried daughter has a newborn, and her mother, played by screen legend Liv Ullmann, is an adoring great-grandmother happy to put in some babysitting time.

Enter the earnest, peppy lawyer (Ken Duken) announcing that with German Reunification in the works, there’s an opportunity to strike a blow for reparations. While the family doesn’t discuss it often, Katrine was a Lebensborn baby, and the four generations currently thriving in the warm, wood-paneled home by the lake only exist due to tenacity and luck. Ullman’s matriarch conceived a child with a German soldier during the Second World War, and after the Allied victory, the father was killed and she was labelled a collaborator and scorned. First, though, the baby was taken to a special orphanage in Saxony—one meant to breed super Aryans. Third Reich propaganda had a thing for Norwegians, and encouraged this specific mixing of ethnicities. When East Germany came under Iron Curtain rule, the records for many of the children were lost.

Or maybe they were intentionally buried? Early in the movie, it becomes apparent that this first family secret is really just scratching the surface. What’s slowly teased out is how Katrine’s miraculous return in 1969 is tied, in some way, to the East German Stasi. To what extent each member of her family is aware is unknown.

The slow reveal of facts keeps the surface of Two Lives more than busy enough, but underneath, there’s plenty to chew on. From a global-politics point of view, it’s fascinating to watch a great engine of distrust go through its death throes. How foolish to think that, with a few pen strokes, decades’ worth of entrenched cloak-and-dagger maneuvers would just cease. While the fall of Communism had its bloodiest aftershocks in Yugoslavia, where a unified country fractured into many nations, the coupling of East and West Germany, the Cold War’s locus, had its share of casualties.

Two Lives’ second half untangles its mysteries with some formalist tricks. 8mm represents the past, a particularly nice choice after a scene in which the heroine is shown setting up a buttonhole camera. (Oh-so-enormous, clumsy, and loud in the smartphone era.) The washed-out colors make an out-of-place character’s clothing leap off the screen—a purely visceral way to create unease onscreen. On the other hand, Two Lives is now officially the film with the least subtle post-Battleship Potemkin use of an imperiled baby stroller, wangling that dubious honor from Superman II.

Grand historical moments lend themselves well to greater metaphors, especially when played out against a domestic drama. Unfortunately, the spy genre is a minefield of spoilers, but it won’t ruin the film to say the conclusion has its share of bonafide “Aha!” beats that work both for the plot and for larger themes. Also, the final shot ought to wiggle its way onto some “best closing image” lists this December, if enough people pay attention.

To an American audience in 2014, the remove of time and distance lends an additional sentiment. All this heartache and strife for East Germany to snoop on Norway? What of any importance came from all that? The true survivors of the Norwegian Lebensborn families may ask the same question.