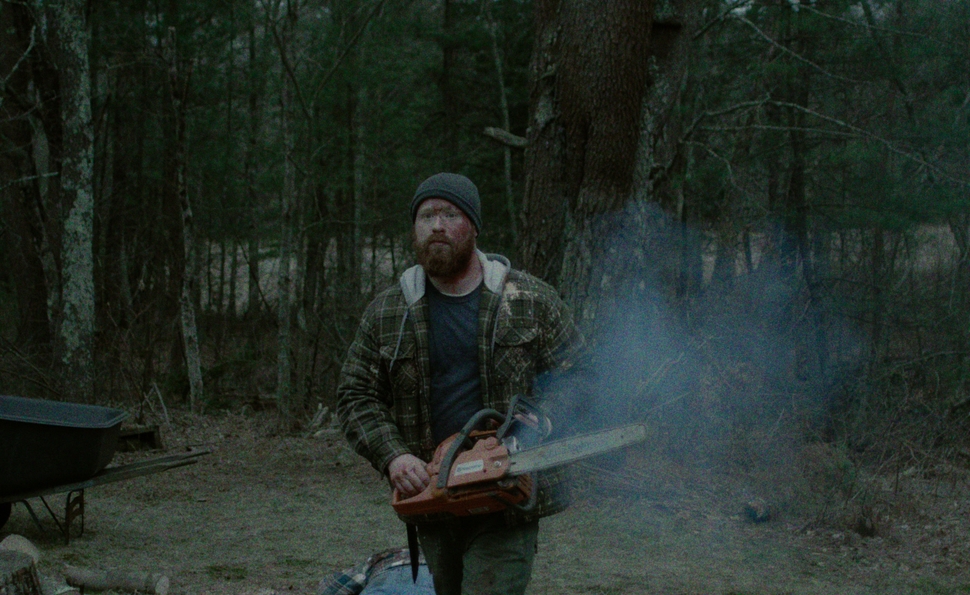 Set mostly in 1989, with a prologue in 1987, Almost Human (no relation to the TV series) begins with a title card modeled after vintage John Carpenter, and ends with a credit for a “Fake Shemp,” paying tribute to Sam Raimi. Writer-director Joe Begos and his longtime buddy, editor/star Josh Ethier, clearly adore 1980s horror, and they’ve conceived their first no-budget feature as a deliberate throwback to the era’s slapdash passion, ignoring every direction the genre has taken in the decades since. When a man holding a shotgun approaches another man using a chainsaw, who’s standing beside a tree stump with an axe buried in it, there’s no doubt whatsoever that all three weapons will soon be wielded in rapid succession, with shock cuts employed to make the most of limited gore effects. Trouble is, Almost Human successfully mimics the most forgettable and uninspired movies from that period—stuff like Pet Sematary and the 1988 remake of The Blob. Begos and Ethier appear to have been particularly inspired by The Hidden, a terrific sleeper, but they can’t remotely duplicate that film’s manic inventiveness or sheer recklessness.

That isn’t for lack of trying, though. The opening scene finds hero Seth (Graham Skipper) already in a frantic state, driving at top speed to the home of his good friend Mark (Ethier). Seth claims another friend of theirs, Rob, was just “taken” by a mysterious flash of blue light, then watches in horror as the skeptical Mark is similarly abducted right outside his front door. When Mark suddenly reappears two years later, naked in the woods, it’s immediately apparent that he isn’t himself, to put it mildly. Brutally murdering everybody he comes across, starting with a couple of hunters (he steal the clothes of one of them, Terminator-style), he goes in search of his former girlfriend, Jen (Vanessa Leigh), with whom he hopes to start a family. New-Mark’s concept of parenthood, however, involves a grotesque tentacle that emerges from his mouth to penetrate other mouths (in the case of his male victims, kept cocooned in a shed) and vaginas (as Jen discovers the hard way, in the movie’s one memorably icky sequence).

Seth doesn’t figure much in that synopsis because he’s largely useless as a protagonist, with no personality apart from “looking constantly stressed out.” He has little personal stake in the mayhem, and Almost Human all but ignores the potentially discomfiting nebulous zone its title suggests. Mark has clearly been altered by some alien intelligence (nightmarish mind-meld flashbacks show him as the subject of painful experiments), but he retains his memories, and can resemble his former self when he wants to, a development which might have been exploited for considerably more tension. That approach would have required stronger actors, though, as well as dialogue that transcends the merely functional. Nor does Begos (who also served as cinematographer) demonstrate the sly formal intelligence seen in Ti West’s similarly retro The House Of The Devil. In the end, there just isn’t much of a movie here; Almost Human clocks in at a mere 76 minutes, and that includes what may well be the slowest end-credits crawl in cinema history. (Eight minutes: more than 10 percent of the film’s running time!) Whatever their budgetary limitations (and discounting Dark Star, which began as a student film), Carpenter and Raimi never shortchanged audiences like that.