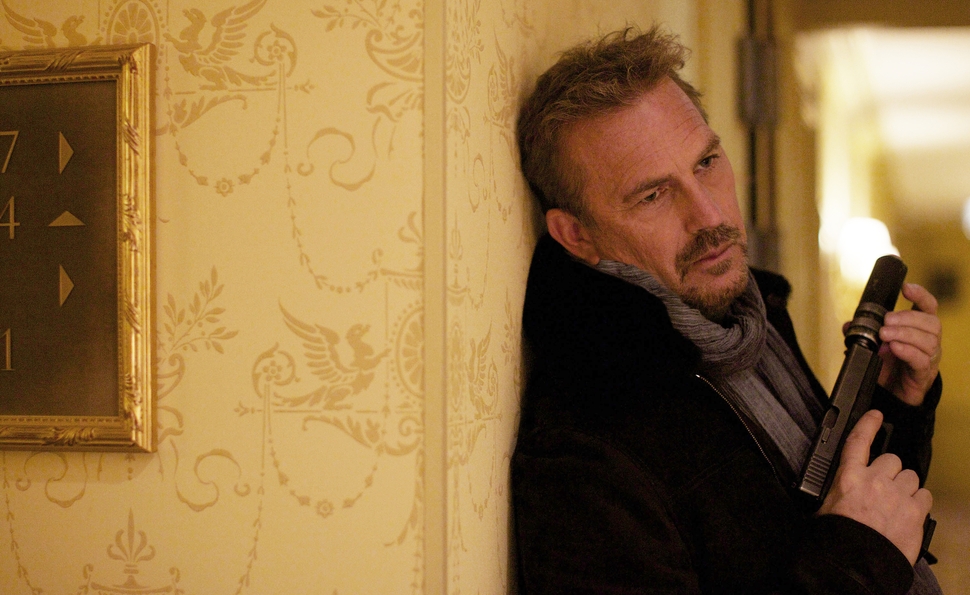 When is a shitty Liam Neeson action-dad movie not a shitty Liam Neeson action-dad movie? When it’s 3 Days To Kill, a new collaboration between McG, the Smash Mouth of American film, and Luc Besson, the cinematic equivalent of irritating but insanely catchy Euro-disco. The film casts a weary, raspy Kevin Costner in the Neeson role of a rugged man of a certain age with a unique skill set, who is called upon to kill an army of poorly differentiated villains in Europe when he isn’t attending to family problems.

Introduced with a cough that in movies like these generally indicates a terminal illness rather than the common cold, Costner stars as Ethan Renner, a CIA agent who has evolved into a devastatingly effective international killing machine at the expense of a fully rounded existence. The Pittsburgh-bred Ethan walked out of the lives of his wife Christine (Connie Nielsen) and resentful daughter Zoey (Hailee Steinfeld) many years back. But he’s afforded a rare opportunity to make amends when he discovers he has a terminal illness, one that sounds only slightly less whimsical and far-fetched than the apocryphal “Brain Cloud” that was ostensibly going to kill Tom Hanks in Joe Versus The Volcano.

Ethan learns his illness will kill him within six months, unless he can get an experimental treatment from his CIA handler Vivi Delay (Amber Heard). That possible cure has narratively convenient side effects, like triggering psychedelic hallucinations whenever Ethan happens to be in a particularly trippy tableau. Vivi will only give Ethan the treatment if he agrees to kill a mysterious figure known only as “The Wolf” (Richard Sammel), currently in Paris. But that mission is complicated by Ethan’s efforts to bond with his resentful daughter, who also lives in Paris. Ethan doesn’t know how to be a dad, so he’s forced to multitask in novel ways. In this new role as dad/assassin, he tortures and intimidates underworld flunkies for information about the Wolf’s whereabouts, but also for tips on how to make a great pasta sauce for Zoey, who is out to impress her French boyfriend.

The film’s premise seems to suggest a wacky culture-clash comedy like Besson’s 2013 film The Family, which pitted Italian-American mobster caricatures against an army of snooty Frenchmen. (Besson is never afraid to depict his countrymen as crude stereotypes.) But McG and Besson, who wrote the story and co-wrote the screenplay with Adi Hasak, play the material strangely straight. The wackiness of a man simultaneously trying to juggle the antithetical roles of Mr. Mom and James Bond is continually undercut by grim themes the film doesn’t have the intelligence, depth, or decency to tackle adequately—like death, mourning, abandonment, and in the film’s most bewildering and offensive sequence, attempted group sexual assault. When Ethan finds a group of French men preparing to sexually assault Zoey in a bathroom at a rave, he beats the creeps, then delivers a stern, judgmental, paternalistic scolding. He comes perilously close to blaming his daughter for the attempted assault, because she dressed provocatively and went to a nightclub filled with creepy French boys on drugs. Elsewhere, Ethan and Zoey’s relationship takes on a distinctly incestuous quality, as in a scene where the reunited pair dance tenderly to a soul song.

Costner is now a long-in-the-tooth action hero, and his best friends are aggressive editing and stunt doubles. Forget verisimilitude or long takes: Judging from the cutting, Costner didn’t need to be on set, or even in the country when most of his character’s fight scenes took place. Though it is remarkable that this frail, dying man can nevertheless toss thugs half his age across rooms when the screenplay calls for him to do so.

3 Days To Kill is ultimately a weirdly earnest melodrama about a troubled man coming to terms with a lifetime of mistakes and a family he regrets abandoning, but someone forgot to inform Heard. She’s introduced as an accomplished CIA agent like Ethan, but she quickly, inexplicably morphs into a sexpot dominatrix who wriggles around in skin-tight leather mini-dresses and stiletto heels, then vamps about like a cross between Mata Hari and Mae West. It isn’t just that Heard appears to be in a different movie from everyone else: She doesn’t seem to be in a movie at all. She’s apparently in the saucy, sexy cutscenes from a violent videogame, an impression only strengthened by her character regularly assigning Ethan “missions” that feel unmistakably like “levels.”

Truth be told, Heard’s cutscenes seem a lot more fun than the movie everyone else is stuck in 3 Days To Kill is openly contemptuous of tonal coherence, swinging wildly from wacky comedy to earnest melodrama to generic action without any concern whatsoever about how it all fits together, or whether it hangs together at all. It’s many different films at once—all muddled, all unsatisfying, and all crying out for Liam Neeson’s participation. It’s a big, dumb, confused daddy-daughter dance of an international spy-thriller-melodrama-romance-family-drama-comedy. Partners in schlock Besson and McG have accomplished the dubious feat of giving the bloody, sexy, violent international spy genre its very own version of the maudlin father-daughter anthem “Butterfly Kisses.”