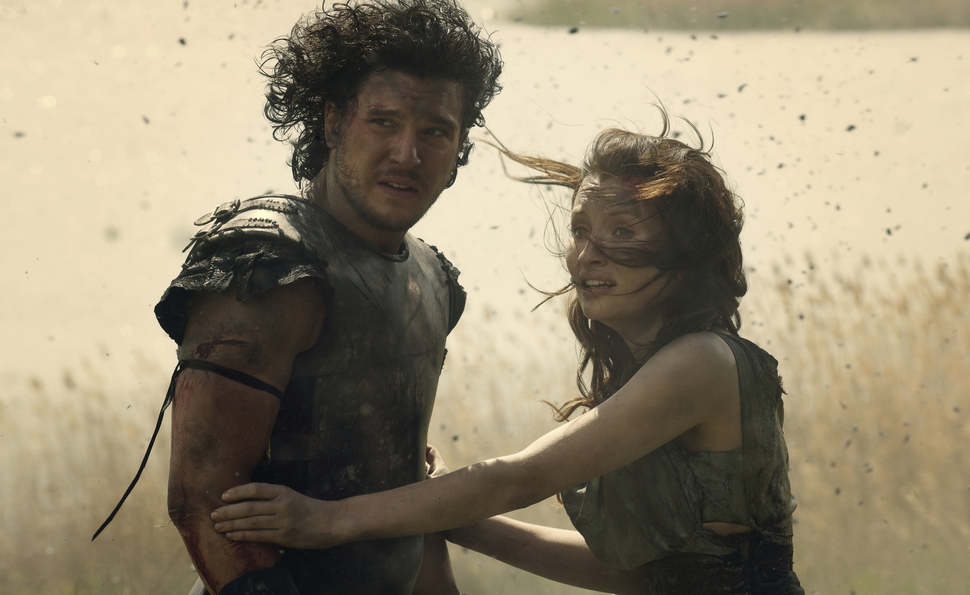 History is lucky that the destruction of Pompeii had an expert witness in Pliny The Younger, an author and lawyer who left behind firsthand accounts of Mt. Vesuvius’ eruption in 79 A.D. Pompeii, a new depiction of that event, opens with a quote from Pliny that suggests the apocalyptic atmosphere of that day. But the film’s true sources are much more recent. Borrowing from Gladiator, the film follows Milo (Game Of Thrones’ Kit Harington), a Celt slave with a chip on his shoulder; his success in the Roman Empire’s gladiatorial games gives him ample time to brood, train, and plot revenge on those who murdered his family. His journey brings him to Pompeii, a few days before it becomes the last place anyone would want to be. But he’s just in time to meet Cassia (Emily Browning), the daughter of a successful landowner (Jared Harris) with some serious, seriously misguided plans to make Pompeii the ancient world’s next big thing. Can the poor boy and privileged girl get together as a historical tragedy looms just over the horizon, here in the form of a volcano rather than a Titanic-sinking iceberg? Near, far, wherever they are, will their hearts go on?

Combined, those two plots give Pompeii a sturdy, familiar framework. In any disaster film, there’s always the risk that everything leading up to the big event will just feel like marking time. The screenplay—credited to Janet Scott Batchler, Lee Batchler, and Michael Robert Johnson—attempts to avoid that by keeping the plot chugging along between cutaways to a CGI mountain that just keeps looking angrier and angrier. Milo is kept busy by an upcoming match slated to pit him against Atticus (Adewale Akinnuoye-Agbaje), a veteran whose respect he grudgingly wins in the buildup to their combat. Meanwhile, Cassia has to avoid the advances of Corvus (Kiefer Sutherland, not really trying), a Roman senator who expects her to be thrown in on his development deal with her father—and who has a connection to Milo’s tragic past.

The film stays active, but it’s all ultimately just busywork on the way to the fireworks. Or, more specifically, the waves of Vesuvius’ eruption, which include fireballs, showers of rocks, easily outrunnable walls of smoke, and other effects. The effects vary from impressive to sketchy, but even the best bits of spectacle feel as weightless as the characters. Pompeii is directed by Paul W.S. Anderson, a filmmaker who has the curious distinction of being simultaneously under- and over-appreciated. Though widely dismissed, Anderson has champions who have rightly pointed toward his films’ striking compositions and arresting visuals. And looked at now, it’s easy to see an Anderson film like 2002’s Resident Evil as a model of fleet, efficient, unambitious, digital-age B-movie filmmaking that makes cheap-looking digital effects part of an overall aesthetic. What the champions tend to overlook is that Anderson’s talents are usually in the service of films that seemingly don’t try to be good in any other way—like AVP: Alien Vs. Predator and the most recent Three Musketeers remake—and that screen-grab-friendly, Tumblr-ready surface pleasures don’t add up to filmmaking.

Here, there aren’t even enough of those, outside of a short fight scene in the fighting pits of rainy Londinium early in the film, and isolated moments of the big blow-up. Only Akinnuoye-Agbaje carves anything like a real character out of the material. The romance never feels more than perfunctory, and without any real rooting interest in whether the leads get together (or whether anyone else gets out of the way of nature’s fury), Pompeii just feels like an excuse to rain digital terror on screaming extras. There’s much to see here, but little to feel, and even less to remember.