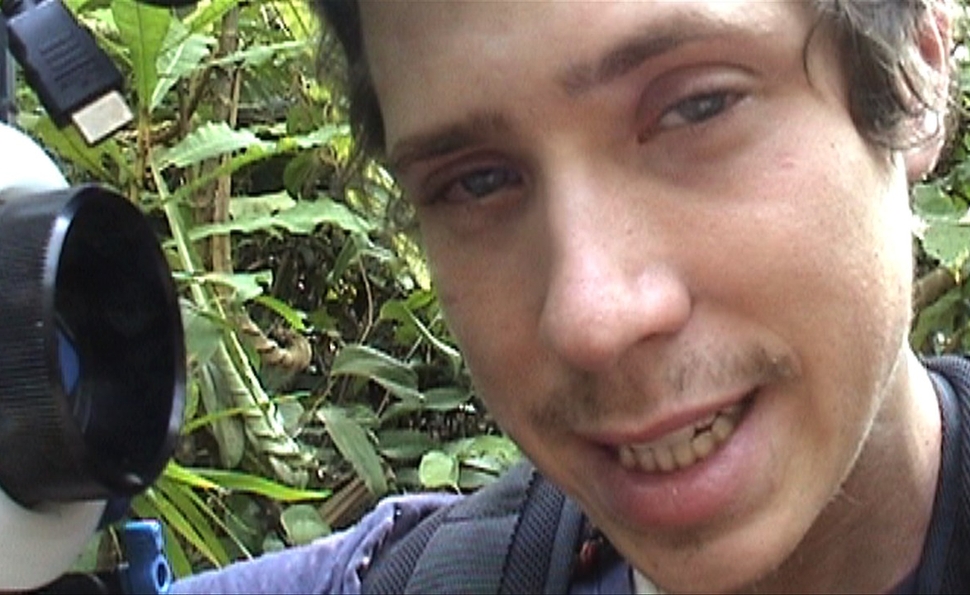 In 2011, filmmaker Nik Fackler and a coterie of his “fucked-up friends” headed to Gabon to make a chemically enhanced travelogue, but after spending a few days consuming massive amounts of drugs and alcohol—and staying up late every night, dancing and philosophizing—they still hadn’t yet done what they’d come to Africa to do. Fackler wanted them all, together, to consume the legendary tabernanthe iboga root, rumored to induce hallucinations, to connect the user to the divine, and to cure the addictions of anyone who takes it. Fackler intended to do iboga right, by heading into the jungle and taking it as part of a pygmy ceremony, while his friends were perfectly happy to experience the tourist version of the igoba rites. “It’s here and now,” Fackler’s conspiracy-theorist pot dealer Ross complains in the film. “It’s Werner Herzog, man.”

The irony there is that Fackler’s plan was far more Herzogian than Ross’; but then, the real subject of Fackler’s documentary Sick Birds Die Easy is neither the igoba root nor ancient tribal spiritualism, but the arrogance of certain kinds of doped-up navel-gazers, and what happens when they aren’t in accord. Sick Birds Die Easy is part of a mini-wave of recent indie features and docs that call back to the extreme, experiential world cinema of the 1960s and 1970s, such as Herzog’s films, Dennis Hopper’s The Last Movie, Francis Ford Coppola’s Apocalypse Now, and some of the wilder documentary/fiction hybrids of Alejandro Jodorowsky and Dušan Makavejev. It’s an ambitious, pretentious journey into self, and like its predecessors, Sick Birds Die Easy acknowledges that when human beings look into a mirror too long, they see only flaws.

The problem with Sick Birds Die Easy and movies like it is that they’re so freeform that anything the filmmaker wants to stick into them “fits,” no matter how off-putting or self-indulgent. Fackler’s film is more focused than some, because he keeps the action fairly contained. After introducing his cast of characters—including acerbic alcoholic musician Sam and his long-suffering girlfriend Emily—Fackler leads them into Africa, and then into the wilderness, where they get high a lot and snipe at each other. (Ross in particular gripes that Sam and Emily are on drugs all the time, and when Fackler points out that they’re all on drugs, Ross says, “I don’t like the way they do it.”) But Sick Birds Die Easy is padded out with an animated interlude, montages set to lo-fi psych-rock, and some overwritten Fackler narration. About 40 percent of the movie feels like outtakes that somehow made it into the final cut. And a lot of the other 60 percent looks staged—at times so clumsily that it’s as though Fackler intends viewers to question how much of this is “true.”

Still, while Sick Birds Die Easy is ungainly, Fackler is ultimately pretty aware of his movie’s strengths. This whole project is framed with a kind of wide-eyed naïveté, positioned as Fackler’s grand attempt to fix his broken friends, and thus prove iboga can heal the world. But Fackler doesn’t shy away from ugliness, circling around again and again to the armies of outsiders who arrive at what they believe to be the heart of human history, then presume to understand what Gabon and the Gabonese are all about. (At one point, a French émigré points to napping natives and claims black people are naturally happy because they only know how to sleep and dance; later, Fackler shows his native guides clearing a path through the jungle and saying, “It’s in our blood to work.”) There’s a honest, moving core to Sick Birds Die Easy, which suggests that every potential utopia will be undone by human nature, whether people hoard a panacea, fail to follow a program through to the end, or fake their way through paradise like Ross, who eventually does takes iboga and have visions, but later admits, “I acted like I was seeing them because I didn’t want to eat any more wood.”