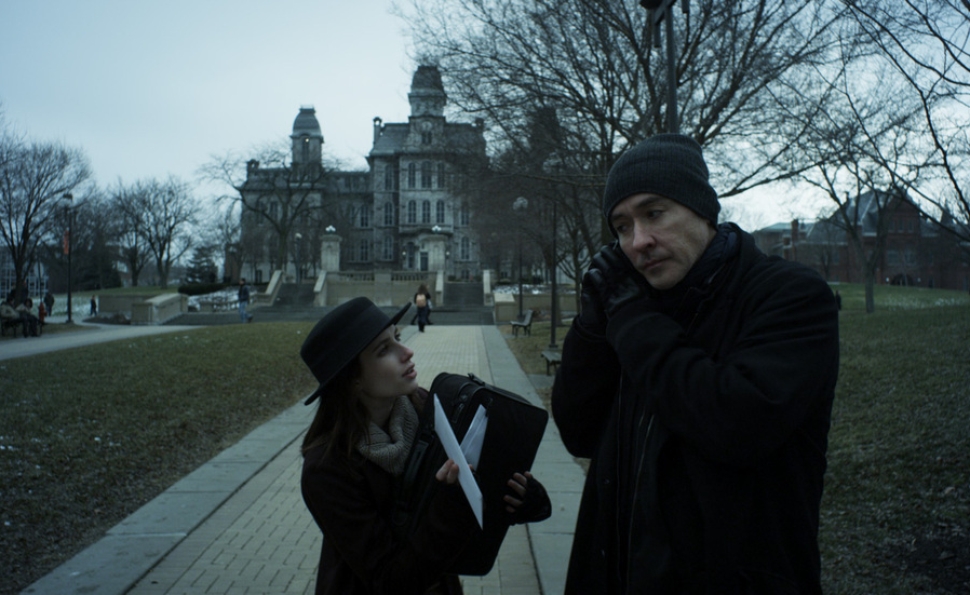 On the surface, Adult World is a cute, conventional coming-of-age story about a young woman with highbrow creative ambitions who learns about life and love after taking a job at an adult-video store. An electric current thrums beneath that tame façade, however, embodied in two of the most arrestingly unhinged performances—given the context—in recent memory. At times, both Emma Roberts and John Cusack appear to be actively trying to subvert the movie’s intentions, as if they could transform it into something closer to The King Of Comedy by sheer force of will. In the end, banality triumphs, but watching them give it their best shot, most likely with the support of director Scott Coffey (Ellie Parker), is a gas.

One of the movie’s charms is its stubborn insistence that anachronisms like aspiring poets and brick-and-mortar adult-video stores still exist. (A self-conscious line of dialogue about porn allegedly unavailable online strives to justify the latter.) Amy (Roberts), a recent college graduate, has exhausted her parents’ bank account and patience submitting her poems to various journals and reviews, most of which charge a reading fee. Forced to get a part-time job, she spots a “help wanted” sign in a shop window and heads in to apply before she realizes the store is called Adult World. Working there, Amy gradually learns that perverts are people, too, and also develops an increasingly flirtatious relationship with shyly sweet Alex (Evan Peters), one of the other clerks. But these life lessons are impeded by her obsession with the once-famous poet Rat Billings (Cusack), who becomes Amy’s extremely reluctant, semi-hostile mentor.

Every scene featuring Amy and Rat together is a giddy marvel of kinetic energy, with Roberts and Cusack seemingly in competition to determine which of them can make their character more unsympathetic. Cusack plays Rat as a sullen curmudgeon who resents any reminder of the passion he once felt for poetry; many of his lines appear to have been at least semi-improvised, and he treats Amy the way celebrities must secretly want to treat their most pushy, annoying fans. Roberts, heretofore best known for her famous relatives (dad Eric, aunt Julia) and for being adorable on Nickelodeon, matches him move for move, transforming Amy into a hyperactive sycophant without an ounce of self-awareness. A scene in which Amy attempts to seduce Rat reaches magnificent heights of queasy comedy (“What, do you think I’m ugly or something?” “No, no. I think you’re psychotic”), all while remaining fundamentally truthful to the likely dynamic between a deeply confused young woman and a burned-out, middle-aged writer.