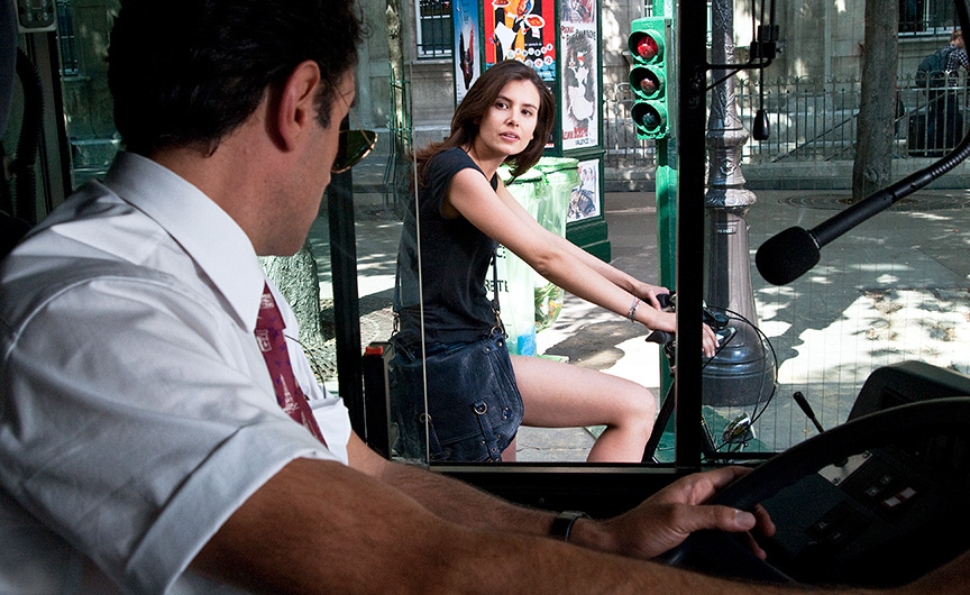 Girl On A Bicycle

Few recent movies strive to simultaneously appeal to as many different countries as the tepid romantic comedy Girl On A Bicycle. Set almost entirely in Paris, the film provides a different nationality for each of its four main characters, along with lighthearted chauvinism from all corners. Paolo (Vincenzo Amato), who’s originally from Palermo, works as the driver of a tour bus, and spends most of his day pointing out items that France stole from Italy, or things Italians do so much better. His longtime girlfriend, Greta (Nora Tschirner), is a German-born flight attendant with a stereotypical love for order, who turns Paolo on in bed by reciting airline-safety instructions in her native tongue. Since neither knows more than a few words of the other’s language, they communicate primarily in English, making Girl On A Bicycle more marketable in the U.S. and many other territories. And lest England feel left out, Paolo’s best buddy, a Brit expatriate who’s annoyed that the locals refuse to speak French with him once they hear his accent, is played by Paddy Considine (The World’s End, The Bourne Ultimatum, etc.).

Trouble is, there’s no nation dumb enough to find this rom-com’s dopey scenario appealing. Not long after Paolo finally proposes to Greta, he becomes smitten with a klutzy French model named Cécile (Louise Monot), who bikes all over Paris and improbably keeps pulling up right next to Paolo’s bus at stoplights. Cécile has two small kids who don’t remember their father, as he ditched the family years earlier; this detail seems irrelevant until Paolo, obsessively following Cécile across the city one day, accidentally runs her down, breaking one of her arms and one of her legs. When he falsely identifies himself as her husband at the hospital (because only family members can visit patients), the children embrace him as their long-lost papa, and he’s forced to parent them full-time due to Cécile’s immobility. This requires telling Greta a series of increasingly desperate lies, putting their engagement in serious jeopardy—even though Paolo quickly loses interest in Cécile, while she falls madly in love with his best friend, Derek (Considine).

Girl On A Bicycle is only the second film directed by Jeremy Leven, though his name has been attached as a screenwriter to a host of mediocre films over the past two decades: Alex & Emma, My Sister’s Keeper, The Legend Of Bagger Vance, and (most notably) The Notebook. His 1994 debut, Don Juan DeMarco, which starred Johnny Depp and Marlon Brando, was lightly charming enough to suggest some promise, and there are fleeting moments of inspiration here, as when Paolo, chasing Cécile, attempts to regale tourists with descriptions of sights that aren’t on his usual route. (In a great running joke that will earn nods of recognition from anyone who knows Paris, he qualifies each superlative with the disclaimer “…if it’s not August, and the place is open.”) The cast, too, is generally appealing, with Tschirner in particular doing expertly goofy work in the thankless role of the suspicious fiancée. But the movie’s ludicrous narrative continually forces its characters to behave like cretins, and even when Leven’s dialogue is tolerable, it can barely be heard over Craig Richey’s aggressively sprightly score. What’s more, the we-are-the-world inclusiveness comes across like shameless pandering—a blatant effort to secure as much global financing as possible. Girl On A Bicycle isn’t French, Italian, German, English, or American. It’s just Phony.