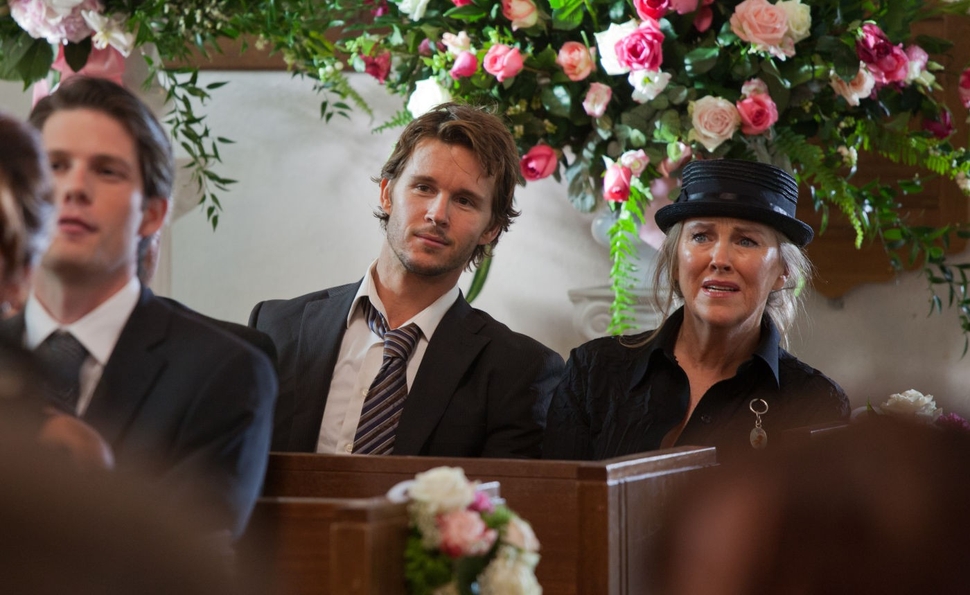 The Right Kind Of Wrong

Mistakenly convinced that cuteness can compensate for a lack of basic believability, The Right Kind Of Wrong squanders its engaging leads and cheerful joviality with a plot of stupefying senselessness. In an unidentified small town in what appears to be Canada, Leo (True Blood’s Ryan Kwanten) becomes a local laughingstock, then a national one, when his ex-wife Julie (Kristen Hager) hits it big writing about Leo’s lameness on a blog—dubbed “Why He Sucks”—that’s soon turned into an even more successful book. This especially pains Leo because he’s a writer, albeit one who threw away a lucrative publishing deal and became a dishwasher, because he didn’t want to kowtow to corporate editorial demands. This is just one of the many anecdotes Julie relays to slam Leo in print; others include his poor bass-guitar playing, his fear of heights, an embarrassing pants-pooping incident on their Parisian honeymoon, and his habit of making grand, impulsive displays of public affection.

The idea that Leo would become a nationwide joke for such minor (and potentially endearing) issues is itself ridiculous. And it immediately lends The Right Kind Of Wrong an implausibility that’s furthered by the idea that the country would wholeheartedly embrace Julie or her book, which is little more than a petty character assassination of a flawed but innocent nobody. Director Jeremiah Chechik—working from Megan Martin’s adaptation of Tim Sandlin’s novel—means for all this to be an adorable prelude to ensuing romantic shenanigans, but it demands a suspension of disbelief that’s simply too great, with the film positing facts about its characters, and its reality, that don’t jibe with what’s actually being presented onscreen, much less what audiences know about the world.

Leo’s fortunes turn around when he happens to see Colette (Sara Canning) punt a football while in her wedding dress, and he decides to crash her wedding to ask her out. That doesn’t sit well with either Colette, a firecracker with a mean right jab, or her new husband Danny (Ryan McPartlin), the type of stereotypical preppy creep destined to eventually reveal his true malevolent colors once Colette warms to Leo’s persistent courting. Before that happens, however, the film indulges in standard-issue amorous hijinks, with Leo suffering setback after setback, yet showing a resolve that speaks to his fundamental goodness, all while Colette turns out to be an anti-establishment iconoclast perfectly suited for Leo.

Kwanten has a genuine flair for sweet-hearted, dunderheaded slapstick, and he and Canning share an agreeable chemistry. But The Right Kind Of Wrong is a phony contraption that follows an illogical path to a preordained happily ever after. It piles on the oh-so-funny peripheral characters (Catherine O’Hara as Colette’s free-spirit mother; two cute Indian kids who help Leo along his way) and wacky recurring asides (here, the regular sighting of a rare white “ghost bear”) to underline its conviction that, when it comes to rom-coms, common sense is far less important than adherence to convention.