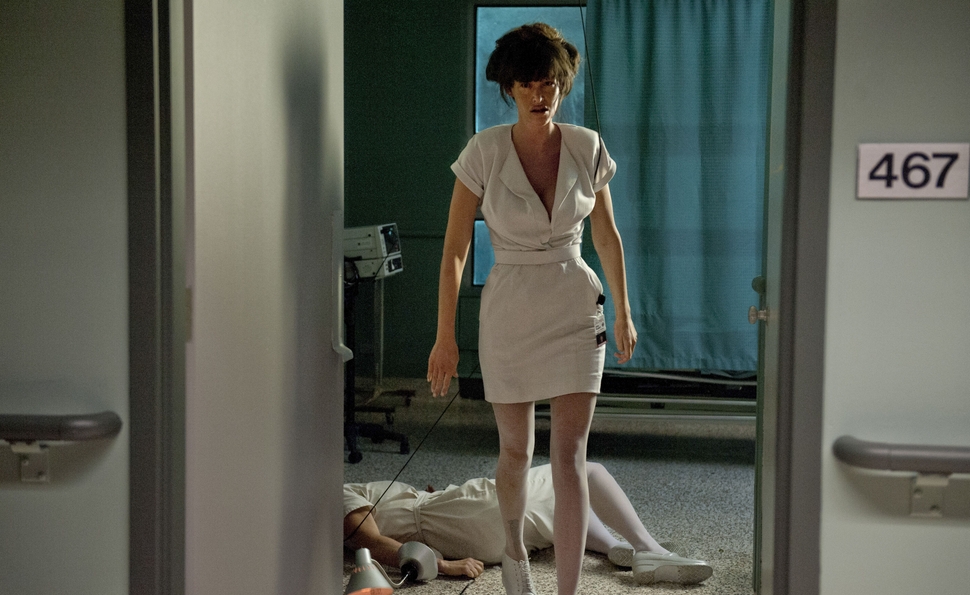 There generally has to be something organic about the creation of a cult film, whether it comes from a filmmaker’s offbeat sensibility, or a powerful response from a subsection of the moviegoing public. Pre-fab cult movies like Robert Rodriguez’s dismal Machete series, or the tacky new exploitation movie Nurse 3D, are too calculated to earn the label: They supply would-be fans with stunt casting, outré kinkiness, and a knowing attitude that feels like the filmmakers are in on the joke. Consider the appeals of Nurse 3D: A psycho nurse played by Paz de la Huerta (Enter The Void, Boardwalk Empire), of the “No, Nudity” clause on every contract; a supporting role for ’stache-sporting Judd Nelson, there for a jolt of Breakfast Club nostalgia; a setting with the prurient allure of old Roger Corman productions like Private Duty Nurses and Candy Stripe Nurses; and a sex-and-stabbing premise that will surely be enhanced by the magic of 3-D. (Provided you live anywhere near a theater where Nurse 3D is playing, which you almost certainly do not, though the comin’-at-ya moments are hard to miss.)

Co-writer/director Douglas Aarniokoski has a nasty little neo-noir thriller tucked into Nurse 3D, but he buries it in his all-chocolate-all-the-time conceptual sloppiness. The thriller is hinted at in a credits sequence that references dime-store paperbacks and an opening scene that seems inspired by Ms. 45. All husky voice and sleepy gait, de la Huerta stars as Abby Russell, a naughty nurse who spends her days tending to patients, and her nights seducing cheaters into a rendezvous with her syringe and scalpel. She finds a hoped-for protégé in Danni (30 Rock’s Katrina Bowden), a recent nursing-school graduate who’s initially receptive to Abby’s friendship and support, but starts to back away when things get a little weird. Abby appoints herself as Danni’s guide to a more gruesome environment than the trainee might expect—“This job is more than sticking thermometers in butts and looking pretty,” her narration goes—but she wants to seduce her, too, which puts her at odds with Danni’s bland-o boyfriend Steve (Corbin Bleu). And when that fails, she resorts to blackmail and murder.

Aarniokoski explains away Abby’s psychosis through a backstory that locates the infidelity and violence in her distant past, but it’s just one more superfluous element that clogs up the original conceit. Casting De La Huerta as a sexy avenger of womankind is a strong exploitation hook, but the film only follows through on it part of the time. The rest is dedicated to Abby’s obsession with Danni—and Danni’s mounting suspicions and fear—which pushes Nurse 3D in the much-less-interesting direction of a convoluted, poorly acted, post-Basic Instinct lesbian thriller.

As raw exploitation, Nurse 3D also over-promises and under-delivers, which might have been inevitable with a title like that. But aside from an impressively gonzo finale, and a few implements of death flying at the camera, this is awfully weak sauce. In its better moments, the film stays close to Abby’s perspective and finds a degree of sympathy for a woman who’s taking a stand against sexual harassment in the workplace, and cheating men in clubs who tuck their wedding rings into the pockets. But before long, Danni becomes the true protagonist and Abby becomes The Other, going from righteous B-movie avenger to monstrous, sadistic freak. And through it all, Nurse 3D winks at viewers with a self-conscious trashiness and sprightly score, a little too pleased with itself.