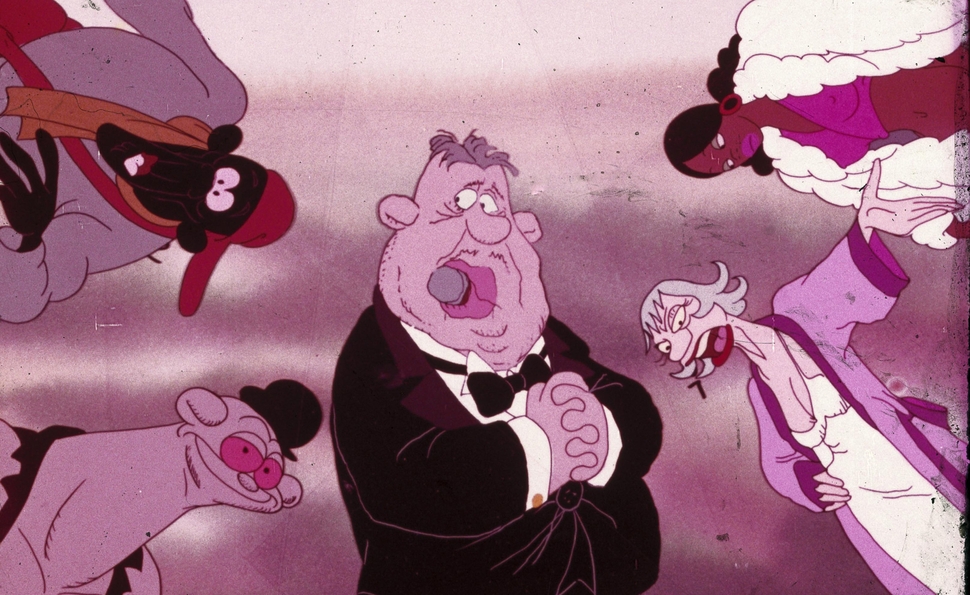 Animator Ralph Bakshi has always enjoyed an uncomfortable relationship with the mainstream, from his superhero-tweaking breakthrough creation Mighty Heroes (“Rope Man! And Diaper Man!”) to a strongly satirical 1980s revamp of Mighty Mouse to his current work on the Kickstarter-funded passion project The Last Days Of Coney Island. And though Bakshi’s 1938 birthdate made him a little too old to be a part of the late-’60s counterculture, at least by the “Never trust anyone over 30” standard, it’s no surprise he took to it anyway. Bakshi first reached out to the Love Generation with the not-so-great 1967 Paramount short “Marvin Digs,” which he hoped to pack with sex and profanity, but ended up filling with toothless generation-gap humor. By the time he returned to the underground with his 1972 big-screen adaptation of Robert Crumb’s Fritz The Cat, which revels in its freedoms while skewering its pretensions and excesses, the love had started to curdle. Bakshi fit right into the new sourness.

The X-rated Fritz The Cat earned enough money to let Bakshi spend the early 1970s expanding on the new freedoms it ushered into big-screen animation, however briefly. While theaters filled with naughty-animal Fritz cash-ins like Down And Dirty Duck and the Bakshi-free sequel The Nine Lives Of Fritz The Cat, Bakshi returned to the human world with 1973’s Heavy Traffic, which gave him another hit on the midnight-movie circuit and let him push his satirical impulses even further. The two go hand in hand: Heavy Traffic has the sex, violence, and wild humor that audiences who made Fritz successful had come to expect from adult-targeted cartoons. And with those boxes checked off, Bakshi could pursue a highly personal vision of what it meant to be young, artistic, ambitious, and deeply frustrated in New York.

Framed as the fantasy of a cartoonist playing pinball in a grimy arcade, Heavy Traffic freely mixes live-action footage with animation. In both worlds, Joseph Kaufmann plays Michael, a floppy-haired cartoonist who, in the fantasy sequences, still lives at home with his doting Jewish mother Ida (Terri Haven) and his father Angelo (Frank DeKova), a low-level gangster who openly cheats on his wife when he isn’t running errands for a local godfather. He’s the only member of the family getting some: 22 and a virgin, Michael is luckless with women, whom he mostly views from a distance, with a pencil in hand. His subjects include Carole (Beverly Hope Atkinson), a knockout black bartender who occasionally favors him with free beer for his sketches. When Carole turns to him for protection, however, he’s forced to confront his anxieties about sex and race head-on. 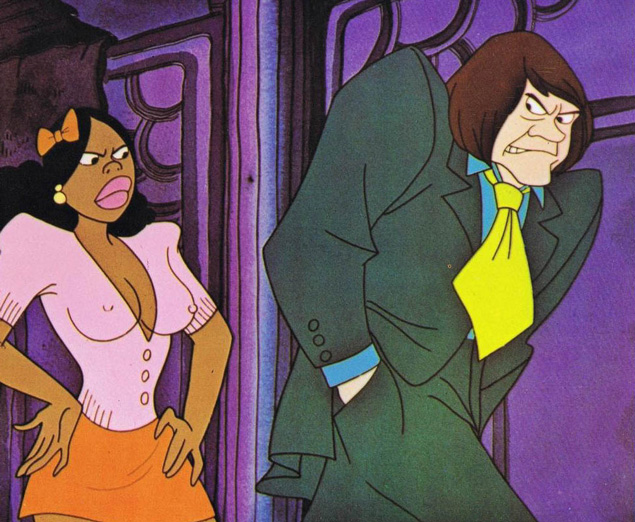 It often isn’t a pretty confrontation. Though Crumb famously disliked Bakshi’s version of Fritz, the two men are in some respects kindred spirits, and Heavy Traffic plays like a work from the id, a portrait of New York drawn in broad, angry strokes. It uses outsized sexual imagery and racial stereotypes to make satirical points that don’t let anyone off the hook, including the filmmaker himself. Michael carries himself with the smug surety of a counterculture that made a point of tearing down the old order, but never got around to proposing an alternative (or realizing they were repeating some of the past’s mistakes). Michael acts as if he’s above the grime surrounding him, but he throws around racial slurs as casually as any bigot, and on the rare occasions he interacts with women, he abuses them. Meanwhile, the city around him responds with a riot of charged, often offensive imagery. (Bakshi’s controversial follow-up, Coonskin, took these impulses even further.)

What makes Heavy Traffic remarkable also makes it a tough sit at times. Mid-film, it becomes a cartoon-within-a-cartoon via Michael’s borderline-pornographic, stereotype-filled interpretation of Chuck Berry’s “Maybellene.” It’s simultaneously daring and unsettling, designed to be uncomfortable and dangerous, but also unpleasant enough to make it hard to watch. At other points, the film struggles to rein in the chaos it creates, never really picking up any narrative momentum as it flits from episode to episode, an approach that probably played better in smoky theaters late at night.

Rough spots and all, however, it’s a tough film to forget, the work of a singular creator striving to capture the era’s gritty spirit. And for all the abrasiveness, there are moments of desolate beauty. Bakshi often blends animated characters with photographic backgrounds to striking effect, and whether working with live-action footage or animation, the film has a great feel for a city that’s seemingly lost its way, whether it’s a shot of Michael alone in a crumbling movie palace, or a sequence in which Ida reflects on her own past, and the vanished elegance of the city into which she was born. It’s a downbeat, dark fantasia of urban life from a filmmaker trying to understand the darkness of the moment before it slipped away. 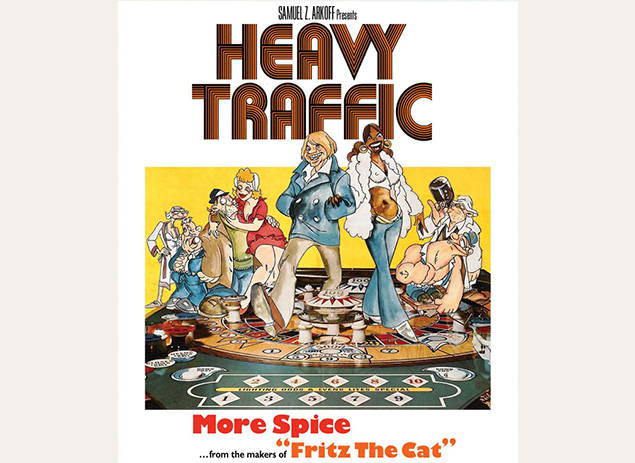 Sadly, and uncharacteristically for Shout! Factory, none. Though the Blu-ray transfer has some scratches and specks here and there, it’s the best this film has looked for a while. And though the packaging claims the film is rated R, and an R-rated cut of Heavy Traffic does exist, this appears to be the full version of the film, which originally received an X rating.