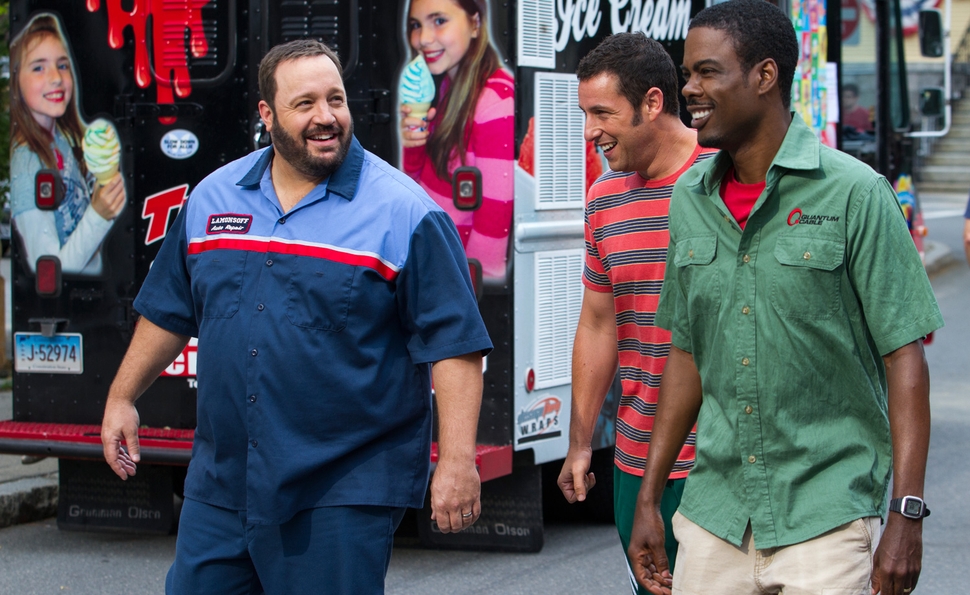 Considering the laziness and cynical calculation that’s characterized so much of Adam Sandler’s cinematic output, it’s remarkable that Grown Ups 2 marks the comedy superstar’s first genuine sequel. In recent years, Sandler seems to be remaking the same puerile comedy over and over, but he usually at least switches things up a little by playing characters with different names and occupations, even if the gags and themes remain dispiritingly consistent from film to film.

So while 2010’s worthless Grown Ups was technically an original film, it nevertheless felt like a dispiriting continuation of Sandler’s campaign to squander his considerable talents. In intriguing outliers like Punch Drunk Love and Funny People, Sandler has teased fans and critics with fascinating glimpses into the challenging and compelling career he might have—if he were willing to sacrifice quick, easy paydays—only to retreat back into a comforting cocoon of the safe and familiar.

Grown Ups seemed more like a scripted home movie than a film, with no reason to exist beyond Sandler’s understandable eagerness to hang out with his old Saturday Night Live buddies for a couple of months and have a movie studio pay them for the privilege. Grown Ups 2 has even less of a reason to exist. The film is so slight that it feels less like a proper sequel to Grown Ups than a failed television spin-off that inexplicably cast Sandler and the gang in the lead roles instead of their low-budget television equivalents. The one upside to Grown Ups’ surprisingly mean-spirited awfulness was that it set the bar so low that it would take little effort or inspiration for a sequel to soar above its predecessor. Alas, Grown Ups 2 fails to rise to even that modest challenge. Though Grown Ups seemingly left nowhere to go but up, Grown Ups 2 speeds downhill in a hurry.

In a preview of what’s to come, the film opens with Sandler’s character, wealthy family man Leonard Feder, waking up to the sublime sight of his wife Roxanne, played by Salma Hayek. (In a groaning play at self-referentiality, Leonard tells his son that guys who look like him only end up with women who look like Hayek in Hollywood movies.) Leonard then turns over to see an enraged deer that sets about urinating on him and much of his family. This establishes both the film’s incredible sense of entitlement and its bottomless fascination with urine, feces, vomit, flatulence, and all the other beautiful colors of the excretory rainbow. Sandler once specialized in playing apoplectic, enraged outsiders and oddballs, but here he plays a man with everything—a beautiful, loving family, lots of money, good friends, a mansion, and a wife who looks like Salma Hayek—who still behaves like an abusive bully. In Grown Ups 2, Leonard and his buddies Eric (Kevin James), Kurt (Chris Rock), and Marcus (David Spade) take great sport in witlessly insulting the morbidly obese, cross-eyed, funny-looking, lazy-eyed, and underemployed. It’s a David-versus-Goliath tale firmly on the side of Goliaths taking on all those ugly, poor, creepy Davids.

Grown Ups 2 chronicles an eventful day and night in the life of Leonard and his pals, as they try to get their mojo back and prove to themselves and each other that they’re not just sad old men by throwing an epic 1980s-themed party rich in cheap nostalgia. Meanwhile, Marcus attempts to bond with a hulking, Nordic illegitimate son he’s never met (Alexander Ludwig), Kurtis enjoys a rare upper hand over his wife Deanne (Maya Rudolph) when she forgets their 20th anniversary, and Leonard tries to deflect his wife’s appeals to have another baby. Leonard, Kurtis, and Marcus delight in mocking goofy-looking losers—played by fellow Saturday Night Live alums Colin Quinn, Ellen Cleghorne, Cheri Oteri, and Tim Meadows, as well as perpetual Happy Madison punching bag Steve Buscemi—because they’re so terrified of their incongruously attractive wives that it’s seemingly their only source of joy in the world.

Film continues to be Rock’s Kryptonite. He’s an incendiary, insightful stand-up comedian, but he disappears inside the thankless role of Sandler’s emasculated sidekick. Rock may be a popular choice for funniest man in the world, but here he’s upstaged by the precocious toddler who plays his son and spends part of the film in a Michael Jackson get-up. (Cue a chorus of “awws.”) James and Spade don’t fare any better, and the film has somehow lost the dead weight of the original’s Rob Schneider without improving in the slightest.

Grown Ups 2 rouses itself from self-satisfied complacency only in a brawling climax that gives the film a much-needed jolt of vulgar energy, even as it epitomizes Grown Ups 2’s embrace of bullying. After enduring mockery and abuse at the hands of Leonard, a hapless, barely employed ice-cream jockey named Dickie (Quinn, one of a number of familiar faces returning from the first film) rallies behind Leonard as a paragon of small-town family values, because he moved back to his hometown to live in a giant mansion with his model-gorgeous wife rather than snort cocaine off strippers in Los Angeles. In an even uglier subplot, Cheri Oteri plays Penny, a mentally ill wallflower convinced that Leonard is her soulmate because of a brief flirtation they shared in the sixth grade. In keeping with the film’s bullying spirit, Grown Ups 2 feels the need to give the gorgeous, successful, and accomplished Roxanne a big climactic victory over Penny. That’s Grown Ups 2 in miniature: It expects audiences to cheer as its glib, arrogant winners triumph over weird, ugly, creepy losers, seemingly oblivious or unconcerned that Sandler’s smug master of the universe is relatable primarily to Sandler and his similarly successful pals. It’s the rare ﬁlm bold enough to take a firm stand against the underdog.