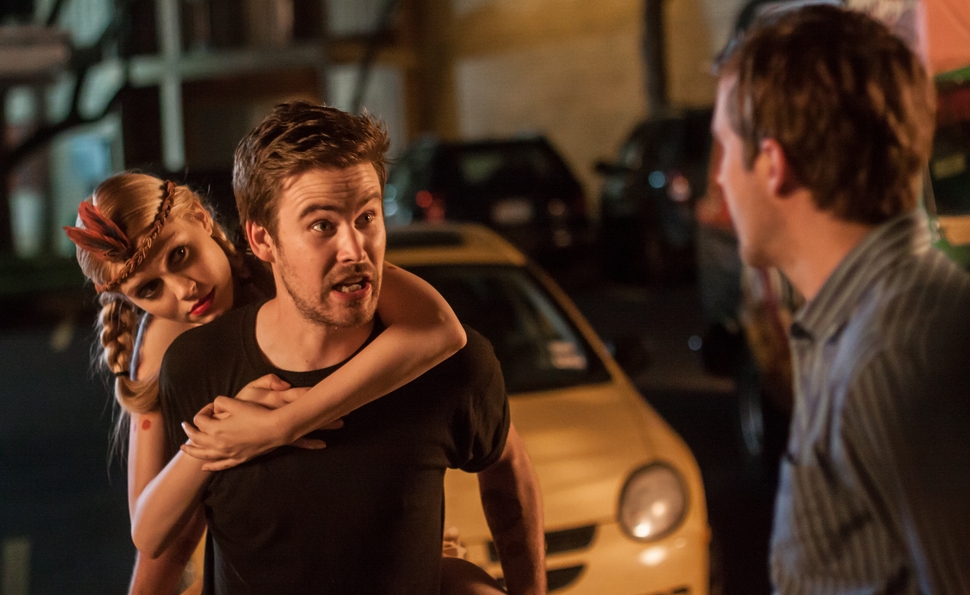 Love & Air Sex is a head-over-heels love letter to Keeping Austin Weird, from the scenes of young, white debauchery on Red River Street to the Tex-Mex chowdowns and the Alamo Drafthouse. But the weirdest thing about Bryan Poyser’s ﬁlm may be how down-to-earth it is, considering how much of it centers on a pantomimed poontang competition. These giddy, absurdist staged perversions, including a dinosaur-themed routine from a guy who bills himself as “Fuckasaurus Sex,” are just diversions. The main act, in which four friends struggle to come to terms with the states of their romantic relationships, is a perceptive, low-stakes exploration of when to move on and when to come back.

Stan (Michael Stahl-David) and Cathy (Ashley Bell) are exes who ended a passionate, dedicated relationship after he pursued ﬁlmmaking ambitions in Los Angeles while she enrolled in med school in New York. They re-enter the Austin orbit together for a weekend when he stalks her on Facebook and books a trip to overlap with hers. As if to balance out Stan’s obsessive ﬁrst move, Poyser neuters his actions for much of the rest of the ﬁlm: For one thing, the script never requires the introvert to actually take up air sex, which is a missed opportunity.

No matter, because the more fascinating interplay is happening elsewhere. Stan’s friend, occasional Fuckasaurus performer Jeff (Zach Cregger), is warring with his own recent ex, the lewd, tattooed Kara (a very funny Sara Paxton), due to grievances that are never fully explained. Jeff channels his anger and pain into his act, using the stage to project an image of himself as an Adonis. (The film’s air-sex routines resemble figure skating as performed by pro wrestling personas.) Kara uses a drunken conquest to stoke penis envy in her former partner, sending texts that would shame Anthony Weiner. In an angle rom-coms don’t typically explore, there’s a sense that Kara’s voracious sexual appetite has given Jeff an inferiority complex, which might explain why he gushes that, with air sex, “your dick can be 30 feet long.” And Stan and Cathy have genuinely sympathetic admirers: While an acerbic musician (Addison Timlin) flirts with Stan, a too-handsome, too-chivalrous, square-dancing, animal-loving veteran (Justin Arnold) has a rapport with Cathy so sweet, it borders on treacly.

Even so, it’s funny how much more palatable romantic comedies become when they’re populated with fundamentally good people. There are no cheaters in this ﬁlm’s world, no shrill harpies, no ﬁght-picking alpha males. Characters are sympathetic to each other’s needs, not just to their own libidos, and the romantic entanglements feel appropriately messy because there’s no one to wish ill will upon. It’s no easy feat to balance this honest tone alongside Team America-like levels of giddy depravity, and there are some moments of disconnect. Yet Poyser still manages to make low-key, low-stakes emotions feel sexy. And if the film’s basic hook still seems alienating, consider: What mainstream cinema calls a love scene is really just air sex by another name.