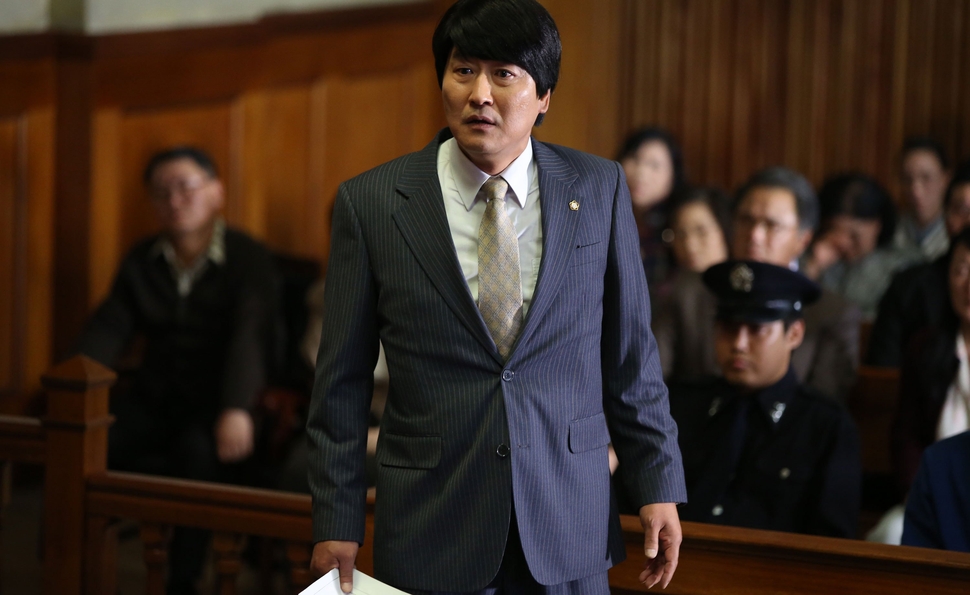 An inspired-by-real-events drama that finds honor, decency, and sacrifice in the legal profession, The Attorney is a rousing old-Hollywood tale of one man risking everything for a just cause. Yang Woo-Seok’s film charts the dawning social conscience of unlikely hero Song Woo-seok (Song Kang-ho, of Memories Of Murder, The Host, and Thirst). Song is introduced in the 1970s; thanks to a new law, he’s striking professional gold as a lawyer by offering real-estate registration services that are no longer the sole province of notaries. Handing out business cards like a two-bit salesman nets Song a reputation as a shameless profiteer—and, as everyone is quick to remind him, an uneducated one as well, given that he only graduated high school. But Song is undaunted, especially once profits begin rolling in, and Yang depicts Song’s rise to middle-class affluence with a sharply nuanced eye. He details the man’s unquestioned ambition, but also shows his true, underlying compassion via past and present-day sequences involving a restaurateur (Kim Young-ae) whom he befriends years after skipping out on a bill.

The Attorney takes its time establishing Song as a three-dimensional character, initially sacrificing genuine narrative energy in favor of an empathetic portrait of its protagonist’s career ascension. Though the action’s first half clearly telegraphs the change in outlook to come for Song, there’s a sense of mild stagnation to much of the early going. Still, the actor brings multifaceted depth to his characterization, making Song proud of his determined professional drive—and the benefits it reaps—yet humble enough to be capable of tenderness and apologetic modesty. It’s a commanding turn cast in a Spencer Tracy mold, and it buoys the film even during its initial longueurs.

Much of that sluggishness dissipates once Song, having already switched his focus to tax law, is given the opportunity to defend the restaurateur’s teenage son against charges that he’s a communist enemy of the state. At this point, The Attorney transforms into a straightforward courtroom drama in which Song is destined to toss away his prejudiced notions about state-sponsored inequality, and fight against the corrupt powers that be.

This involves copious mid-trial grandstanding in which Song, faced with a conspiracy of forces eager to see kids vilified as North-sympathizing villains, rants and rails with the type of reckless abandon that only happens in the movies. And yet despite those concessions to unrealistic Hollywood conventions, The Attorney’s righteous anger at injustice—stoked by sequences of the teenager’s torture, and Song’s persecution by colleagues and the public—is delivered with effectively mounting urgency. The momentum crescendos with the last-second appearance of a surprise witness, though ultimately the story’s coda reveals the film as not a happily-ever-after fairy tale, so much as a rousing call to anti-oppression activist arms.