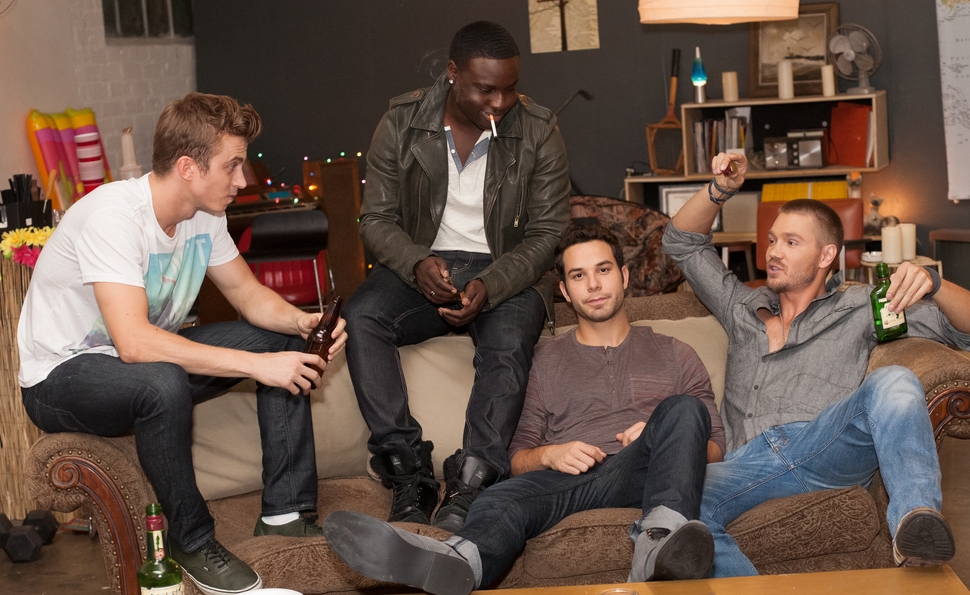 In Cavemen’s opening scene, a scruffy, confident lothario named Jay (One Tree Hill’s Chad Michael Murray) begins to tell his friends what he promises is a great story about picking up an Indian woman at a bar. The telling takes twice as long as it should. There are interruptions and digressions, which only make the anticipation of the punchline even greater. Finally, Jay gets to the finale, which involves him getting a blowjob from the woman in an alley. It’s a pretty anticlimactic climax, but Jay nevertheless says his friend Dean should include the story in a screenplay he’s writing.

Cavemen borrows heavily from several movies about singletons on the perpetual prowl, none more blatantly than 1996’s Swingers. Like that film, Cavemen is set in Los Angeles and follows an endearing, socially inept guy (Dean, played by Pitch Perfect’s Skylar Astin) as he seeks professional success, the perfect woman, and a good time with his bar-hopping buddies. Those buddies include his always-scoring best friend Jay and their two roommates. They all live together in a bachelor pad dubbed The Cave, an industrial space with a floor plan so open, the bedroom walls are made out of bedsheets. When Jay isn’t with his fellow Cave-dwellers, he’s usually hanging out with Tess (Camilla Belle), a close friend and a classic female-movie-character construct: the stunning woman who fits in perfectly with the guys. That evokes another movie Cavemen references almost as glaringly as Swingers: When Harry Met Sally.

That’s actually a good thing, because the scenes between Dean and Tess are the film’s most enjoyable, unforced moments. They have a natural chemistry together: Dean becomes palpably more relaxed and confident in her presence, and Tess seems more grounded and relatable when she’s bantering by his side. Cavemen suffers every time they aren’t onscreen together.

It also suffers because Faber’s screenplay never achieves lift-off. In a movie like this, where plot points are practically an aside, the characters’ depth and the dialogue quality are what give it potentially memorable zing. Cavemen is not only zingless, it practically pulls a muscle attempting to generate some. Jay and company repeat a line over and over when they pick up an interested vibe from a woman: “She’s giving me E.” The E stands for energy, and that phrase is supposed to be the Cavemen equivalent of a great Swingers line, the one moviegoers will repeat in casual conversation after watching. Instead, it just feels contrived. It’s a line that isn’t money, but is trying hard to be money, and the audience definitely knows it.

The movie is weighed down by other contrivances, too: the pre-teen nephew who becomes a sounding board for Dean’s romantic woes; the meta conceit of the screenplay Dean’s writing, which sounds an awful lot like Faber’s actual screenplay; the appearance of the rakish, alcohol-soaked talent agent (Jason Patric) who sees something special in Dean; and worst of all, Dean’s desperate dashes to catch up with Tess as she speeds off in one of the film’s many improbably available Los Angeles taxis.

Then there’s the whole problem with Jay, who, as Murray plays him, is such an unrelenting douchebag that it’s unclear why Dean ever would have befriended him in the first place. Throughout the movie, Jay tells stories that end much like that first oral-sex-related one: with him receiving one-sided pleasure from some hot chick. This is supposed to illustrate what a narcissistic guy he is. But even obnoxious, self-involved people (at least the kind in movie comedies like this) can be fun and charismatic. Jay is worse than a jerk: He’s a really boring jerk.

Some of Faber’s characters lack charm, but his visual style doesn’t. As a filmmaker, he proves he has a subtle eye, and he bathes his scenes in a soft, cocktail-hour glow that suits his nightlife narrative perfectly. He just needs to pair that sensibility with more original material.

There’s a moment in Cavemen when Dean, on a first date, nervously rubs his chopsticks together, prompting his dinner companion to ask, “You trying to start a fire with those things?” That’s what Faber does in this movie: He compulsively scrapes ideas together, but fails to notice that his behavior isn’t ever going to generate sparks.