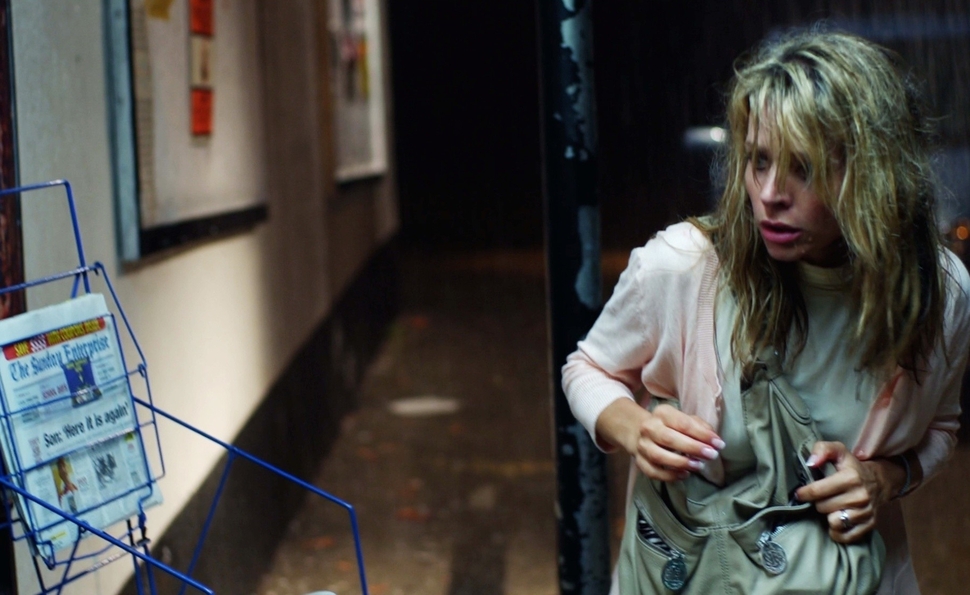 Anna Thompson (Jessalyn Gilsig) isn’t happy, and Somewhere Slow, the movie that tells her story, wants to make damn sure that doesn’t escape anyone’s attention. The opening scene sees her chirpily ordering three double cheeseburgers at a fast-food joint, then immediately vomiting them back up in the ladies’ room. Her husband (David Costabile, best known as Gale on Breaking Bad) is such a cartoonish dullard that he casually announces “I’m thinking of taking guitar lessons” in the middle of sex. When Anna gets laid off from her job as a cosmetics supplier (or something along those lines), her boss gives her the news in the most callous, insensitive way possible—not out of any apparent malice, but simply because that’s the blunt, overstated mode writer-director Jeremy O’Keefe has inexplicably chosen for what’s intended as an intimate character study. Title notwithstanding, Somewhere Slow doesn’t dawdle and luxuriate; everything is presented right up front, then underlined three or four times for good measure.

Having achieved maximum misery in the first 10 minutes or so, Anna seizes the day when she happens, by sheer chance, to witness a convenience-store robbery that leaves both clerk and crook dead. Grabbing the bag of cash the robber commandeered before gunfire broke out, she happens, by sheer chance, to stumble upon a bus headed for Maine (she’s in Delaware), and impulsively boards it without telling her husband or anyone else. At a stop along the way, by sheer chance, she meets a teenage boy, Danny (Graham Patrick Martin), who’s equally adrift, and the two of them set off together for the beachside cottage where Anna lived as a little girl. Eventually, a romance blossoms, even though Danny is also perfectly willing to get blowjobs from random truckers when Anna isn’t around, and it’s vaguely implied that his sexuality is at the root of his own unhappiness.

Oddly enough, this same basic scenario—frustrated wife embarks on adventure with slightly fey teenage boy in a Delaware setting—was seen (albeit not by many) in the 2011 indie drama The Dish & The Spoon, starring Greta Gerwig and Olly Alexander. But while Gerwig’s typically empathetic performance rescued that film from whimsy overload, Gilsig (Terri Schuester from Glee) never succeeds in making Anna more than the sum of her tics. She comes across as slightly robotic at both ends of the character’s emotional continuum: manic and depressive. The movie ends on a close-up of her face, held at length, that’s meant to be freighted with significance, but in fact conveys virtually nothing. Consequently, it’s up to various anecdotal interludes to keep things lively, and the best O’Keefe can manage is a drug-fueled bacchanalia hosted by Danny’s friend Paul (Wallace Langham), which turns mildly ugly when Danny discovers that Paul took nude photos of him sometime earlier, instead of implying the nudity, as they’d agreed. That’s about as exciting as things ever get. Journeys of self-discovery don’t amount to much when the people involved are made of cardboard.