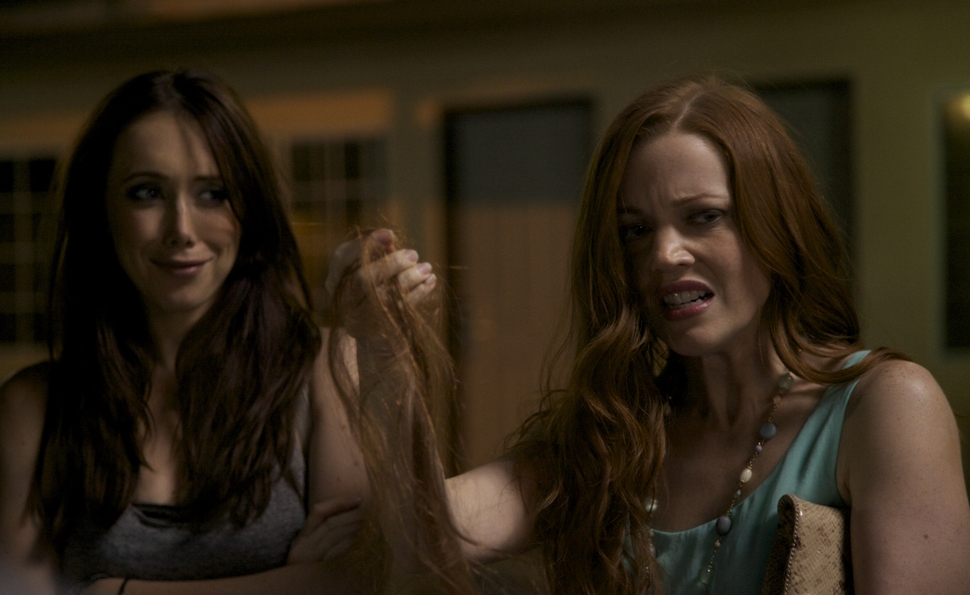 The press notes for Best Night Ever describe the ladies-gone-wild comedy from writer-directors Jason Friedberg and Aaron Seltzer as “a departure from their usual fare.” This is technically true. Friedberg and Seltzer are responsible for cranking out a parade of critically panned movie parodies over the past eight years, including Date Movie, Epic Movie, Meet The Spartans, Vampires Suck, and most recently, The Starving Games, released last year in very few theaters and on VOD. Unlike those previous releases, Best Night Ever isn’t a movie parody.

But “departure” is a misnomer, because Best Night Ever is filled with Friedberg-Seltzer’s signature juvenile gags, gross-out humor, and lazy riffing on other, better films. By following a Las Vegas bachelorette adventure that careens into increasingly disturbing places, Best Night Ever steals pretty obviously from The Hangover, Bridesmaids, and virtually any comedy in which pre-wedding partying gets out of control. Actually, with its quartet of female stars, including one portrayed as more prudish and proper than the others, as well as a scene in which the four don ski masks to commit dastardly deeds, Best Night Ever often feels like a less polished, adult version of Spring Breakers. But since Harmony Korine’s journey into Floridian hedonism was shot in 2012, only a few months before this movie, that’s likely more coincidence than anything else. That coincidence also might be the most interesting thing about this slapdash addition to the raunch-lor/raunch-lorette genre.

A plot description seems almost uncalled for, but here it is: Claire (Desiree Hall) is a week away from her wedding day when she embarks on a Vegas road trip with her older sister Leslie (Samantha Colburn) and two friends (Eddie Ritchard and Crista Flanagan, the latter blonde and unrecognizable as the actor who played Lois on Mad Men). Leslie, the wife of a one-percenter, has booked a $4,500-a-night penthouse suite at a swank Vegas hotel and secured front-row seats to see Celine Dion. But for reasons revealed later, her credit cards aren’t working. So everyone relocates to a cheap motel, the Celine plan is scrapped, and the evening devolves into street muggings, explicit strip-club trips, 4 Non Blondes sing-alongs in Dumpsters, disastrous Jell-O wrestling matches, and attempts at vengeance that result in unexpected defecation.

Nearly every one of the film’s attempts at comedy is clichéd, tasteless, or forced—sometimes all three at once. Also forced and borderline nonsensical is the movie’s ongoing, found-footage-esque conceit that everything onscreen is being captured by one of the women’s personal video cameras, which is often tucked into a handbag. The characters are way too conscious the camera is there, often looking directly into the lens, and even, most preposterously, stopping to set it up right after being robbed and nearly killed. It’s painfully obvious that the purse-cam could not possibly have captured most of these moments as clearly as it does.

Best Night Ever makes no attempt to carve actual characters out of these four women, instead treating them like hard-partying chess pieces that get pushed from one place to another, to participate in whatever allegedly hilarious antics Friedberg and Seltzer have in store for them next. Despite all the images that aggressively attempt to convey fun—dance-club booty-shaking, light-up penis tiaras, bachelorette party dares, and hard-liquor consumption—the movie is never actually any fun. It’s just a nasty headache that starts long before the morning after, and doesn’t let up until the credits finally bring sweet, much-needed relief.