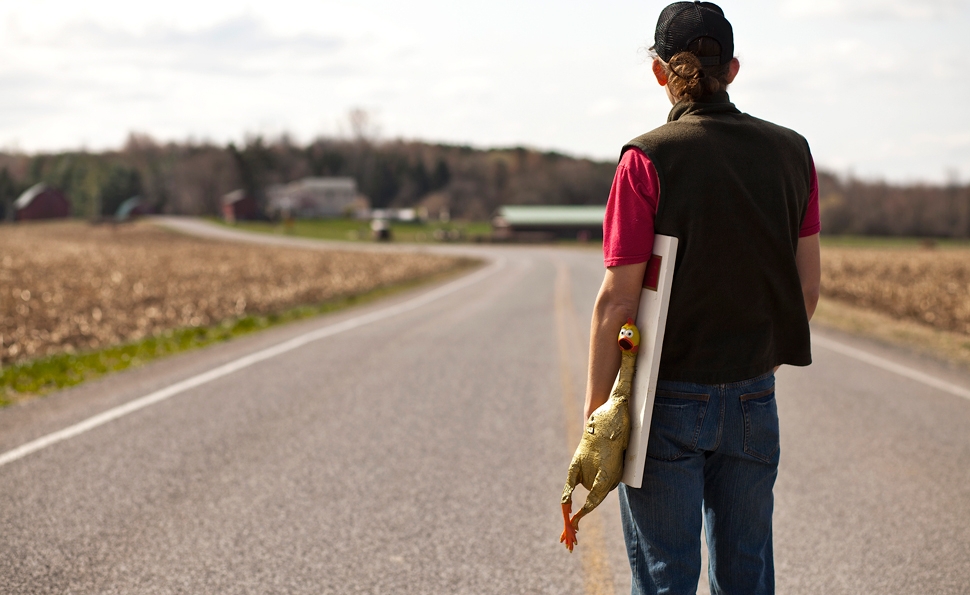 Also, commitment. Every man needs a mission, and the zeal these guys (plus Reynolds’ longsuffering girlfriend, Lucie Mayerova) bring to theirs can only be called, well, missionary. They fill out detailed scorecards at each restaurant they visit. They debate the fundamental nature of a chicken wing, ruling some of the wings they sample as inadmissible. The film’s humor arises from the Socratic rigor Reynolds and the busload of lovable goofballs he’s recruited bring to an undertaking that seems silly at first blush, but is revealed upon deeper examination as very silly.

Reynolds, a gangly, ballcap-wearing Central New York native, was 8 years old when his gusto for wings earned him an ulcer. Decades later, while living in Bratislava, Slovakia as a reporter for Reuters News Service and The New York Times, among other outlets, he introduced his Slovak friends to the delicacy through tasting parties at his apartment. (English subtitles translate Reynolds’ conversations in Slovak with his girlfriend and film crew throughout the movie.)

Unlike hot dogs, pizza, or nachos, Reynolds argues, chicken wings are a uniquely American strain of junk food, one whose origin can be traced with relative certitude: In the 1960s, the proprietor of Buffalo’s Anchor Bar, Teressa Bellissimo, turned a fowl appendage previously of as little use to chefs as it was to domestic chickens into a midnight snack for her young son, triggering a culinary craze. This suspiciously pat origin story is where The Great Chicken Wing Hunt begins.

As gastrointestinal stunts go, Reynolds’ quest is neither as physically harrowing or as politically driven as that time Morgan Spurlock spent a month eating only at McDonald’s. In his frequent addresses to his camera, Reynolds defines his quest as more of an academic pursuit of an ideal. “I believe in perfect things,” he says. “The perfect day, the perfect relationship, the perfect song, the perfect wing.” It’s about more, in other words, than who will ultimately take possession of the trophy: a rubber chicken spray-painted gold and nailed to a board. (No wonder the chicken looks alarmed.)

For a movie about a foodstuff that offers flavor without nourishment, The Great Chicken Wing Hunt offers little sensual pleasure beyond judge Al Caster genially performing acoustic versions of traditional songs like “The Wreck Of The Old ’97.” The cinematography? Strictly TV-news grade. Animated graphics accompanied by wacky game-show-style sound effects chart the caravan’s location and the standings of the restaurants in contention as the hunt proceeds.

If this is meant to stoke suspense, it fails. The quest is just a restaurant tour instead of an elimination-style showdown; the stakes of the 70th wing-tasting don’t feel any higher than those of the first. The participants in the hunt and the chefs Reynolds interviews all seem like people worth getting to know, but none of them get enough screen time to coalesce as characters, because the main human-interest story Reynolds follows is whether his zeal for hot wings will outlast his girlfriend’s patience. The lack of dramatic tension makes the 71-minute running time feel too long, while the meager characterization makes it seem too short. It’s a bizarre problem.

A few scenes hint at the more absorbing portrait that might’ve emerged had Reynolds de-emphasized the process of the hunt—scenes of the judges gnawing on bird flesh and spouting chains of adjectives quickly become repetitive—and instead invested more deeply in its participants as people. One of those participants in need of further exploration, the camo-clad Ron Wieszczyk, admits he joined the project as a distraction from grim news at his day job. His employer, Kodak, was demolishing plants and laying off his friends as the hunt was taking place. Elsewhere, a ponytailed, handlebar-mustachioed cook identified only as Freedom brags about the long fuse on his extra-spicy wings. “They take that first bite, they eat it, they enjoy it,” he explains. “But by the time they’re getting that second bite in, it’s too late. And as the nutrient-depleted days pile up, Zuza Piussi, the most hilariously matter-of-fact of Reynolds’ Slovak crew members, berates the director in Slovak for dragging his friends along on his inane expedition. “They’re not getting any booze or any normal food,” she tells him. “They’re not getting any ass. All because of you.”

The Freedoms and Zuzas of the world deserve the flicker of recognition Reynolds has given them, and more of them could only improve his film. It’s still an agreeable appetizer, but viewers who come to it hoping for a meal may end up crying fowl. Er, foul.