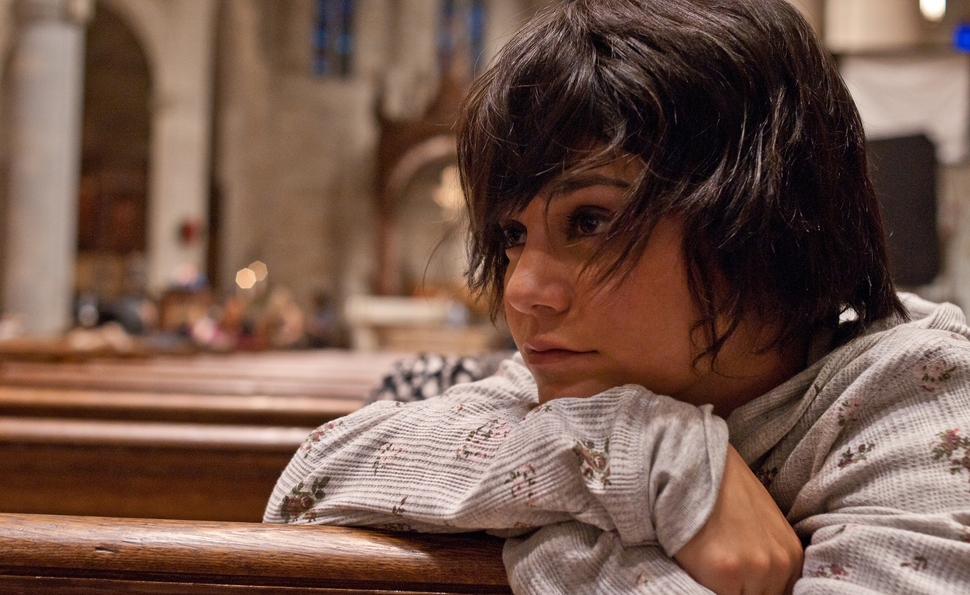 Though Gimme Shelter shares a title with a Rolling Stones song and a Maysles documentary about the Stones’ ill-fated concert at Altamont, it doesn’t appear to be much inspired by either. In fact, it might have arrived by its title even if there had never been a Rolling Stones. Vanessa Hudgens stars as Agnes “Apple” Bailey, a 16-year-old who literally spends much of the film seeking shelter after fleeing the drug-ridden flophouse she shares with her violent addict mother June (Rosario Dawson, acting behind a pair of monstrous yellow choppers seemingly left over from a werewolf movie). From there, she heads first to the Sopranos-esque New Jersey McMansion of Wall Street wheeler-dealer Tom (Brendan Fraser), the father she’s never met. He first tries to send her packing with a wad of bills, then takes her in against the wishes of his brittle wife Joanna (Stephanie Szostak), who’s one cackle away from doubling as a wicked stepmother from a Disney cartoon.

Shelter acquired, so “The End,” right? Wrong. Apple has a longer journey to take, and more living and learning to do along the way. Apple’s position in Tom and Joanna’s house becomes more precarious once she learns she’s pregnant, which leads to a lecture from Tom about mutual respect and a trip with Joanna to an abortion clinic where mean nurses tell patients to hurry up and get undressed so the doctors can get on with their work. Apple flees the appointment, and from that point on, Gimme Shelter’s never-all-that-hidden faith-based agenda comes to the surface. After getting into a car accident, she awakens to find kindly priest Frank McCarthy (James Earl Jones) at her bedside. “I don’t need no priest,” Apple tells him. “God don’t care about me.” The rest of the film sets out to prove her wrong.

It’s pretty clumsy about it, though. Though at the other end of the virtue-vice spectrum, Gimme Shelter is as much an attempt to shake up Hudgens’ Disney Princess image as Spring Breakers, covering her in rags and giving her piercings, an unflattering haircut, and a neck tattoo. She delivers a committed performance that’s gamely free of vanity but continually hampered by the script from writer-director Ron Krauss, who gives her one long, uninterrupted monologue after another, and asks her to deliver them at the top of her emotional register, behind pools of tears. It doesn’t help that, though based on a true story, Apple’s journey doesn’t offer much drama. Once Apple lands in a shelter for teen moms run by the tough-but-kindly Kathy (Ann Dowd), she winds up in pretty good hands. (In that respect, it’s essentially the anti-Philomena.) June shows up from time to time to reclaim her daughter, at one point explicitly stating it’s because she can get even more welfare money with a kid and a grandkid (boo, hiss), and later resorting to violence when she sees Apple collecting donations for Kathy’s shelter. (No need for government assistance with God on your side, apparently.) But mostly, Apple settles into an easy rapport with her fellow shelter residents and learns to trust the Lord, give or take a few moments of doubt here and there.

Still, though light on drama, Apple’s scenes at the shelter are easily the best part of the film, among the few moments when Gimme Shelter decides to show the effect of faith and charity rather than simply preach it. The film depicts shelter life as rough, but elevated by the help the young women give each other. There’s a whole film to be made about that part of Apple’s story—one driven less by hysterics and villainous mother figures, and more by examples of how charity and compassion can turn dead ends into doorways—but Gimme Shelter doesn’t seem to want to make it.