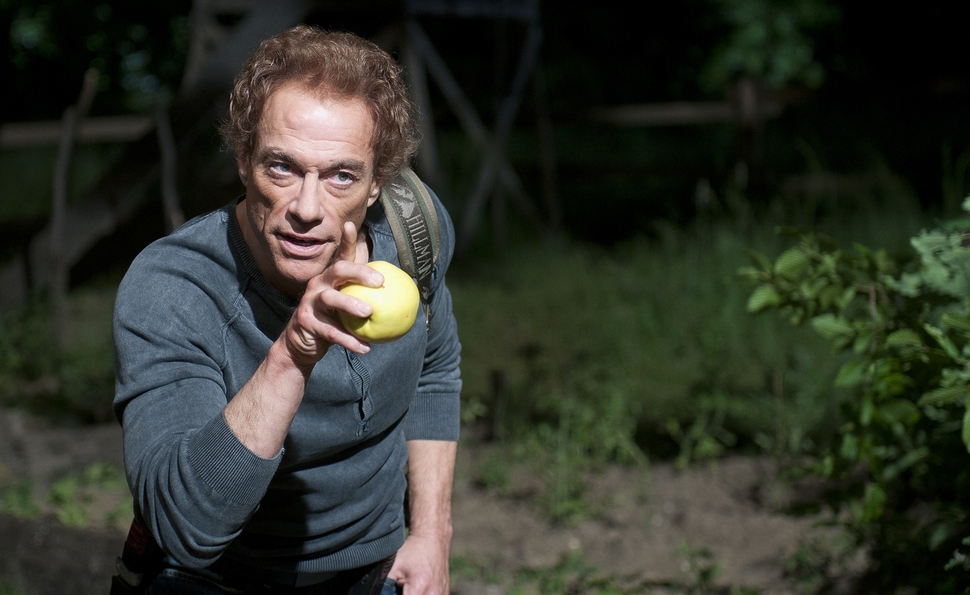 In 1995, director Peter Hyams and actor Jean-Claude Van Damme made one of the more outlandish Die Hard knock-offs: Sudden Death, starring Van Damme as a traumatized firefighter who must save the vice president and 16,000 hockey fans and his two children from a gang of terrorists who take Pittsburgh’s Civic Arena hostage during Game 7 of the Stanley Cup finals. Nineteen years later, Hyams and Van Damme have re-teamed for a spiritual sequel: Enemies Closer, an action flick about a traumatized Special Forces soldier turned park ranger who must save himself and a girl he’s interested in and the ex-con who’s trying to kill him from a gang of terrorists who are searching for the contents of a plane that crashed nearby. The major twist is that Van Damme has switched roles, from hero to villain—and what a villain: a French-Canadian, heroin-smuggling, Mountie-impersonating militant vegan.

His name is Xander, and when viewers first meet him, sneaking into a U.S. border command center in full Mountie regalia, he immediately launches into a monologue about his distaste for meat-eaters and cow farts. After a quick fight scene, he’s back to telling tales. Eventually, he combines both of his interests, and tortures a man while simultaneously regaling him with a yarn about Xander executing his own grandmother for crimes against veganism. The whole performance is one delightfully quirky scenery-chew, first metaphorically and later, as he picks and eats fruit off of forest trees, literally.

Too bad no one else in Enemies Closer can match Van Damme’s oddball charisma. The hero of the scenario is Tom Everett Scott’s Henry, a John McClane-type going through his humdrum duties as a park ranger at isolated King’s Island: warning teenagers about drinking on the property, dealing with the island’s resident crotchety old man, helping comely hikers who’ve gotten lost and trapped under debris. Scott exudes a rumpled everyman charm in these early scenes, but things turn sour for Henry once he’s saddled with a tragic backstory and an equally tragic tough-guy sidekick (Orlando Jones) who wants to kill him because of a secret from his past. While the tensions between Henry and Jones’ Clay escalate, Xander and his men arrive at King’s Island searching for their scag. For reasons best left unsaid—by this review and the film itself—they need Henry to retrieve it, so the two mortal enemies must work together to defeat the drug-runners and survive the night.

Hyams has been an action director and cinematographer for decades, and he knows his way around a fight sequence. The ones in Enemies Closer are rarely exceptional, but they’re always satisfying, with a liberal sprinkling of impressively gymnastic MMA-style holds and throws. But for an 85-minute thriller, Enemies Closer is awfully slow and talky. With Scott and Jones in their roles, it seems like the movie should quickly conform to the contours of a buddy-cop flick, but their scenes remain a surprisingly dour slog through macho clichés and moralizing, and a poor fit for Van Damme’s bizarre flights of fancy. Every time Xander disappears so Henry and Clay can hash out more of their differences, the film grinds to a halt—and the action scenes aren’t frequent or exciting enough to justify all the chatter.

Enemies Closer looks better than any movie made this cheaply has any right to; Hyams gives King’s Island a moody, shadowy ambiance that serves the story well. But it isn’t just the budget that’s shrunk in the interim between this and Sudden Death; the stakes are considerably smaller as well. Absurd though that film may be, a lot is on the line as Van Damme races to save his kids, the vice president, and the future of American hockey from Powers Boothe. Enemies Closer has a couple of solid fight scenes, but when you get right down to it, it’s basically just seven people no one cares about, plus Van Damme, squabbling in the dark over a bunch of drugs.