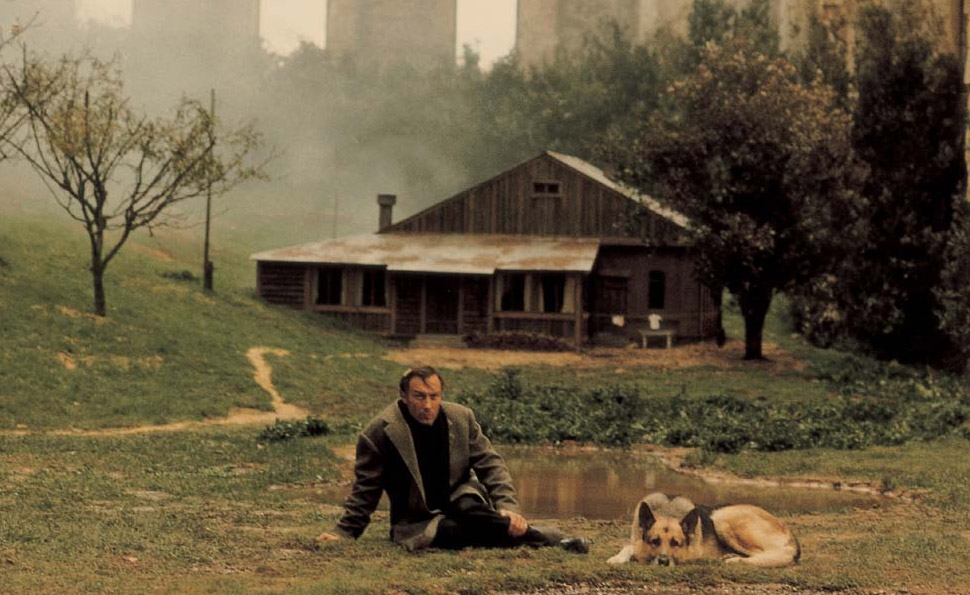 The Tuscan countryside is Italy at its most postcard-perfect, a fertile landscape where rolling green and yellow hills are the world’s premier source of Chianti wines and other agriculture, and a draw to tourists worldwide. Much of Andrei Tarkovsky’s Nostalghia takes place in Tuscany, where a Russian poet and his comely translator are researching an 18th-century composer. But through the director’s lens, it’s utterly transformed. Mired in the interiors and exteriors of a convent and steam-choked hot springs, his Tuscany is more haunted than lush, a grey-white palette that suggests psychological space as much as physical terrain. Nostalghia is the opposite of a travelogue: It’s not about being in Italy, but about being away from home, and the filters that cloud a person’s view of a foreign place.

Released in 1982, Nostalghia reflects Tarkovsky’s exile from the Soviet Union, where tension between himself and censors effectively ended his run as producer of the country’s most revered cinematic exports. His alienation from his homeland is acutely felt throughout the film, but it’s never plainly articulated. Nostalghia is one of his most difficult works in a career full of them, because so much of its meaning seems tied to internal thoughts, experience, and logic, and Tarkovsky isn’t inclined to build the audience a bridge. Like his onscreen alter ego, he’s playing the poet abroad, and the best way to receive his rapturous images is to intuit their meaning rather than scrambling for specific answers.

Working with screenwriter Tonino Guerra, who partnered with Michelangelo Antonioni on the latter’s most significant films, Tarkovsky centers Nostalghia on Andrei Gorchakov (Oleg Yankovskiy), a moody Russian poet seeking to write a book on an obscure composer named Pavel Sosnovsky. The parallels between Sosnovsky’s story and Gorchakov’s state of mind are unmistakable: Sosnovsky also lived in exile in Italy, and committed suicide upon his return to Russia. Gorchakov visits Sosnovsky’s old haunts with his interpreter Eugenia (Domiziana Giordano), but his repeated rejections of her advances, based on loyalty to his family back home, sour their relationship. Gorchakov’s attention focuses instead on Domenico (Erland Josephson), a former asylum-dweller who once holed up with his family for seven years, sheltering them from an imagined apocalypse.

The “Is he really crazy, or is it the world that’s truly insane?” line of thinking on Domenico diminishes the character into a cliché, though a shocking turn in the final act at least affirms his conviction. But Nostalghia isn’t the type of film where traditional characterization has much relevance. Just as Tarkovsky used deep space to explore psychological space in Solaris, here, he’s using an estranging, sepia-toned Tuscany to express the dimensions of the soul. In that sense, Nostalghia has a lot in common with Guerra and Antonioni’s tales of modern alienation, which are concerned foremost with tone and feeling rather than anything more immediately graspable. Much of the film is difficult to understand—as with many poems, its meanings are so personal that they’re often cryptic—but Gorchakov’s (and Tarkovsky’s) displacement comes through powerfully in lonely rooms and in tracking shots that give the impression of a soul adrift. Nostalghia opens with a black-and-white shot of Gorchakov’s home, an idyllic scene of a family by a lake; the rest of the film is about registering the distance.

The new Blu-ray transfer, mastered from archival 35mm elements, captures the majesty of Giuseppe Lanci’s cinematography, but the disc is otherwise slim in extras, with only the theatrical trailer included.