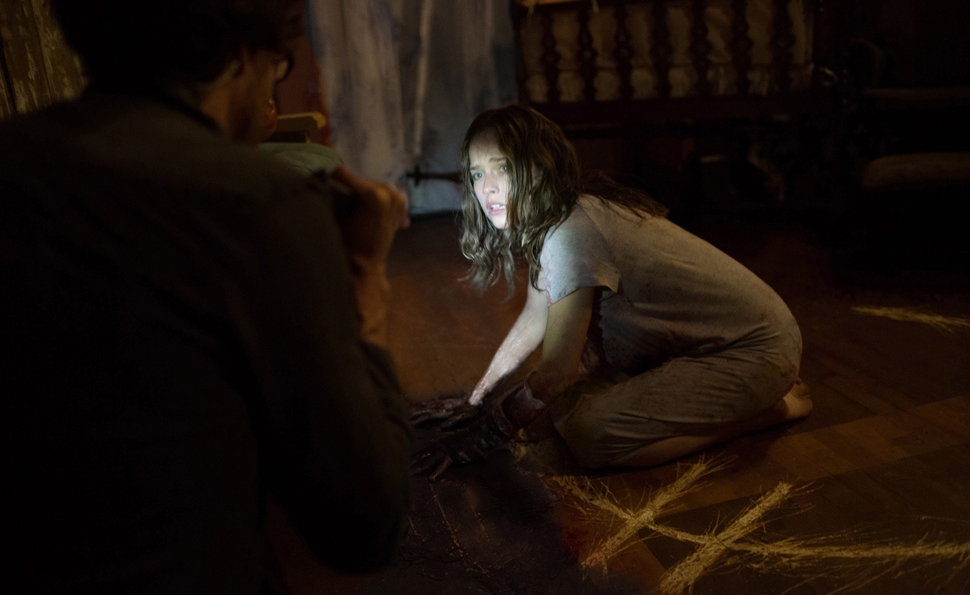 There’s a wonderful shot in Rosemary’s Baby where the camera tracks in on a telephone conversation happening just beyond a door—a conversation that heightens suspicion over the goings-on at a Manhattan apartment building. The camera moves to frame the door in such a way that viewers naturally try to peek behind it, but can’t quite crane their necks far enough. That’s director Roman Polanski playing viewers like a fiddle, almost teasing them with his storytelling mastery. And it’s also the type of effect that isn’t possible in Devil’s Due, which basically updates Rosemary’s Baby for the age of found footage and relentless self-documentation, and presents a natural study in contrasts between Polanski’s more formalized approach to horror and the catch-as-catch-can spontaneity of found-footage or first-person effects. It’s an unfair fight, granted, but the small achievement of Devil’s Due is how much it both exploits the video-cam approach and overcomes some of its limitations.

One of the bigger obstacles in Devil’s Due is how often the camera’s presence has to be justified—and even then, there are scenes where it makes zero sense for one to be present. Zach (Friday Night Lights’ Zach Gilford) and Samantha (Allison Miller) are newlyweds who head to Santo Domingo for their honeymoon, and Zach is the type who wants to record everything for posterity. (He even gets a mini-cam he can attach to his shirt as a wedding present!) That desire only increases when Samantha comes home pregnant after a strange night, and Zach the doting future father wants every precious moment on tape to show his kid later. So into the obstetrician’s office he heads, and into the church, too, often laboriously explaining why he won’t turn the damned thing off. When he isn’t explaining, viewers are also likely to wonder why it’s on. Meanwhile, Samantha, a bright young woman with an ominous past, is going through a rough pregnancy—understandable, given that she’s carrying the Antichrist to term.

Beneath all the occult hubbub in Rosemary’s Baby, Mia Farrow’s character reflects common, relatable anxieties about pregnancy, motherhood, marriage, and figuring out who she is as a woman. Some of those themes are also present in Devil’s Due, which effectively exploits the nerves of first-time parents dealing with an unplanned pregnancy, as well as a mother whose body is going through changes more extreme than morning sickness. But the problem with Devil’s Due is that it’s from Zach’s perspective, not Samantha’s, and at a certain point, she becomes The Other, a vessel for some evil force rather than a flesh-and-blood person whose humanity hangs in the balance.

Yet despite these flaws and the slow wind-up that always plagues found-footage productions, Devil’s Due is better than it has any right to be. As part of the collective “Radio Silence” (which also includes Justin Martinez and Chad Villella), directors Matt Bettinelli-Olpin and Tyler Gillett made the last and most effective segment of V/H/S, a manically inventive take on the haunted-house movie, and they bring a crack sense of timing to musty possession-movie clichés. They’re also patient enough to allow the disturbances to accumulate over time without having to sacrifice character work for metronomic shocks. The world doesn’t need another first-person horror movie any more than it needs another play on Exorcist-style demonology, but Devil’s Due does well enough to suggest a future for Bettinelli-Olpin and Gillett when they aren’t having to trend-hop.