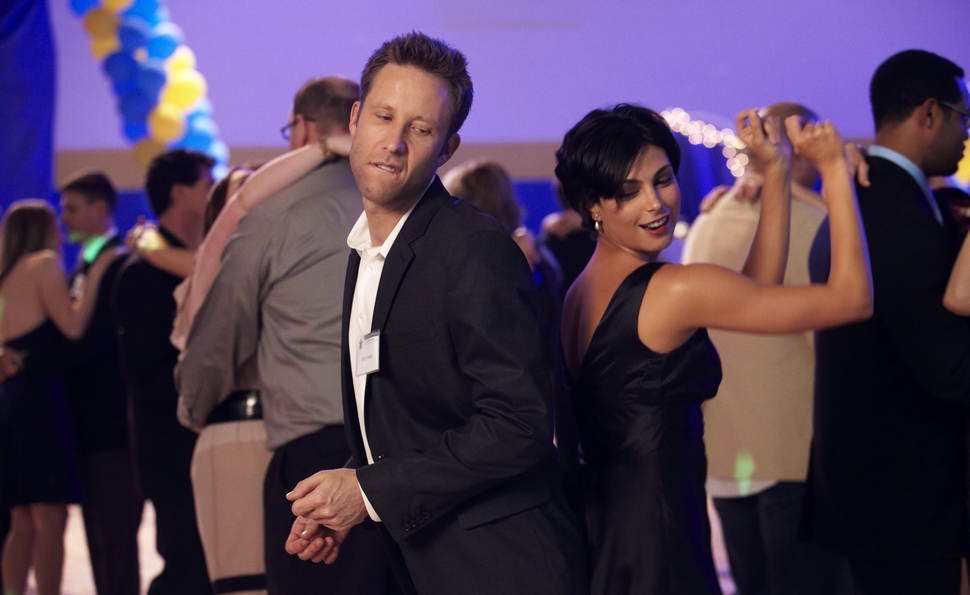 Back In The Day

Writer-director-star Michael Rosenbaum indulges in countless old-hat genre tropes in Back In The Day, a tale of an average Joe who goes home for his high-school reunion, pals around with buddies, and tries to rekindle a romance with his ex. Failing L.A. actor Jim Owens (Rosenbaum) decides to return to his Indiana hometown for his 20-year reunion in the hopes of recapturing the magic of his youth. That get-together is preceded by reconnecting with friends T (Isaiah Mustafa), Len (Kristoffer Polaha), and Skunk (Harland Williams), who’ve all settled down and gotten married, but in one of many narrative implausibilities, still have endless time to hang out and act like doofus teenagers. Meanwhile, these friends’ wives are all grating appendages defined by their refusal to have sex (T’s wife), their secret kinkiness (Skunk’s wife), or their nosy reprimanding (Len’s wife), the last of which becomes persistent once Jim starts cozying up to former flame Lori (Homeland’s Morena Baccarin), who’s now engaged to Mark (Jay R. Ferguson).

Since everything is as it was before, Jim’s desire to steal Lori away from Mark is underscored by the fact that, in school, Mark was the brute who stopped Jim from scoring a game-winning touchdown. Even this past-present rivalry, however, goes nowhere in Back In The Day, which is too lazily plotted to follow through on its neatly laid-out parallels. Instead, it chooses to spend an inordinate amount of time on Jim and Lori flirting, and shots of the rest of the gang looking on with eye-rolling disapproval. That displeasure may be justified, given the couple’s inappropriate behavior, yet it proves almost as big a buzzkill as a centerpiece gag in which Mark (back from a bachelor party in which he chooses not to cheat on Lori) pukes in a toilet, and Jim, hiding in the adjacent shower, is compelled by this upchucking to begin vomiting himself.

Such de rigueur gross-out gags are strewn throughout Back In The Day, which also makes a recurring joke out of Angie (Liz Carey), a once-glamorous cheerleader now downing shots and smoking cigarettes while pregnant with her fourth kid by an unknown father. Nonetheless, that still isn’t as tedious as a slow-mo shot in which a naked, airborne Williams finds his penis visually positioned alongside a screaming mouth for maximum homoerotic humor. Jokes of a racist and gay-panic variety are trotted out with wink-wink irony that fails to diminish their unpleasantness, though such intolerant ugliness is in keeping with the film’s generally retrograde nature.

Rosenbaum’s adherence to stock formulas and corny nostalgia (including a soundtrack filled with 1980s/1990s pop songs and ballads) is enervating, as is his use of Nick Swardson (playing a drunk-and-dazed loser) as a random-crazy-guy comedic crutch. But even more detrimental to the material is the simple sluggishness with which everything is paced and staged. Punchlines are telegraphed from a great distance, life lessons are articulated at metronomic intervals, and everything is shot with bland flatness. It’s a film that feels like it’s simply going through the motions—not to mention one whose ultimate critique of trying to relive the past is, in light of its mass of clichés, more than a tad disingenuous.

GoWatchIt: Buy. Rent. Stream Back In The Day