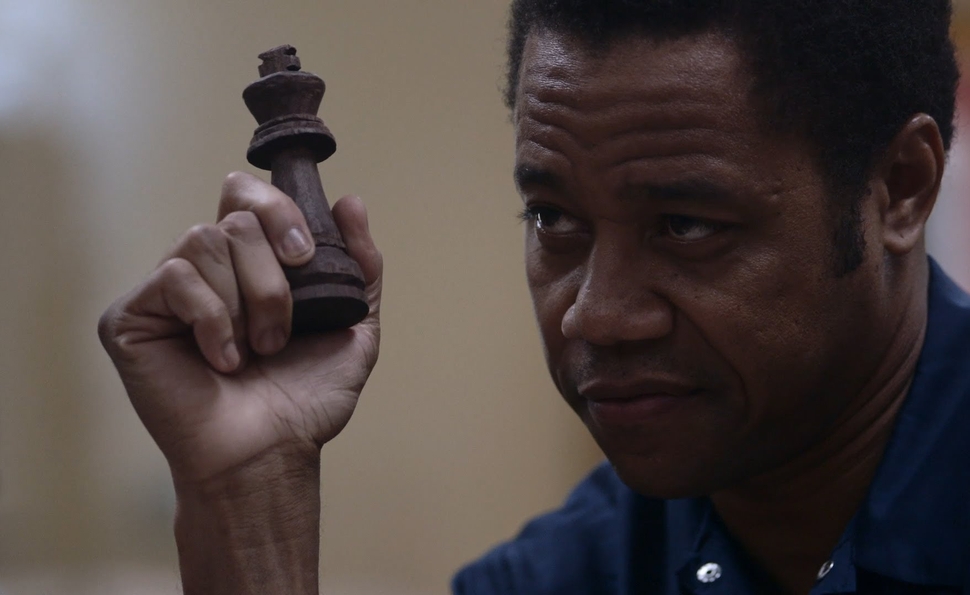 Life Of A King

Very early in Life Of A King, a wise, soulful prisoner known as Chessman (played by Dennis Haysbert, the only actor alive who can challenge Morgan Freeman for weathered dignity and God-like authority) tells protégé and departing prisoner Eugene Brown (Cuba Gooding, Jr.) that when it comes right down to it, life is like chess. Chessman tells Eugene that when considering his options, “Just keep your eye on the endgame. Everything else will fall into place.” He then presents Eugene with a hand-carved chess king that quakes with symbolic significance.

There isn’t a note of irony or self-consciousness in Haysbert’s voice, not even the faintest acknowledgment that comparing chess to life might just be the single most overused cliché in all the arts, just as there isn’t a hint of irony or self-consciousness in the film that follows. Chessman disappears for much of Life Of A King—Eugene is so relentlessly inspirational, the film can’t handle an even more uplifting figure—only to return at the most narratively inspirational moment to tell a young man that while his body might be imprisoned for the rest of his life, “My mind gets out every time I open up that [chess] board, every time I open up a Bible.”

Life Of A King manages to sustain a hilariously over-the-top tone of naked sincerity from start to finish. Those bookended moments of shameless, maudlin melodrama with Chessman aren’t the exception, but the rule for a film about chess whose endgame is obvious even before it lays down its metaphorical chessboard. Whatever obstacles he faces, Eugene will end the film inspiring the hell out of some stock juvenile delinquents, and earning no small measure of redemption for himself in the process.

Gooding, a good actor but also sometimes an entertaining bad one, delivers one of his most enjoyably awful performances as Eugene, a world-weary survivor who gets out of an extended stint in jail hungry for a job, a renewed relationship with his resentful and estranged adult children, and a shot at redeeming himself for a life filled with regret and misdeeds. He gets a job as a janitor in a rundown school and stumbles into his life’s calling: teaching chess to glowering ne’er-do-wells, first in the school where he toils, then later in a run-down building he calls “a mansion of possibilities.”

For Life Of A King, nothing is ever obvious enough. It’s the sort of ponderous, heavy-handed message movie where sneering kingpins deliver spirited monologues about how, yes, underground figures such as themselves embody many of the ills of the inner city, but they also provide a social safety net where the government and legal private industry does not. The film makes staggeringly obvious statements about chess as a metaphor for life, about the perils of life in the inner city, and the difficulty of keeping straight for ex-convicts. Then it underlines and bolds those statements, then makes them again and again and again.

The film takes its tone from Gooding, whose career and persona are predicated on big dramatic moments and hammy showboating. His performance is defined by a total lack of self-awareness. He transforms the film’s protagonist into a paper saint devoid of character flaws or doubt; it’s hard to reconcile his current saintliness with his past as a feared, ruthless criminal. Life Of A King is a hokey, cornball tribute to man’s capacity for change and growth, but people don’t generally go from Al Capone to Gandhi, as Gooding’s character does here.

Because it takes itself so seriously and executes its encyclopedia of inspirational-sports-movie and inspirational-teacher-movie clichés with such dour earnestness, Life Of A King (a.k.a. Mr. Holland’s Chessboard) is consistently hilarious, an oblivious, sustained exercise in self-parody much funnier because it never consciously tries to be funny. Though ostensibly based on a true story, the film feels like it has been finessed, exaggerated, and beaten into formulaic fiction. It’s a twisted parody of high school and mentoring whose achievements are entirely accidental.