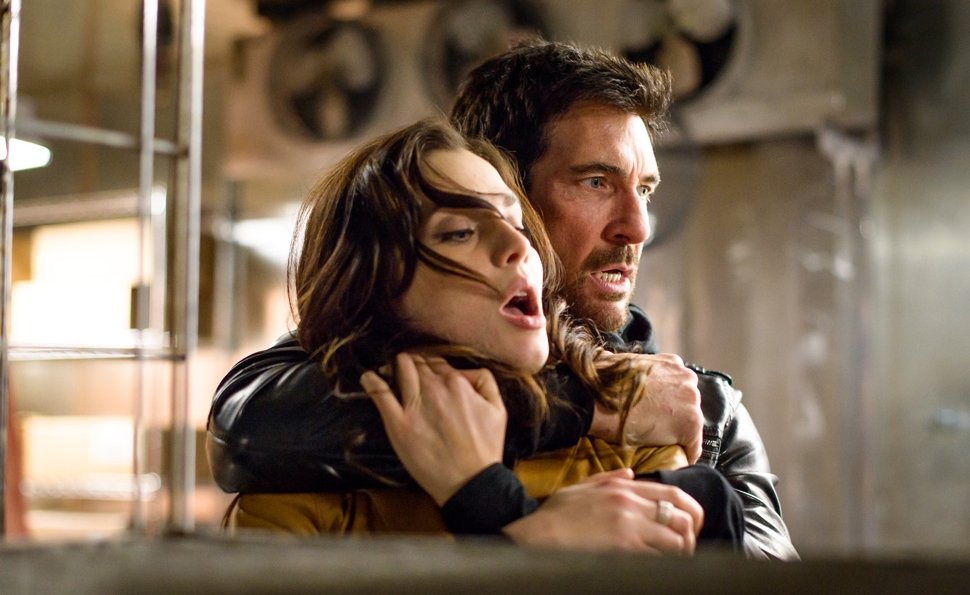 The first rule of making a movie cheaply is to limit the number of locations—sticking to just one, if at all possible. In recent years, this has led to a proliferation of thrillers involving one or more characters trapped in a confined space: a coffin (Buried), a car trunk (Brake), a bank’s vestibule (ATM). Freezer is a movie about a guy locked in a walk-in freezer, and nothing more compelling than that initial, budget-saving concept appears to have occurred to anyone involved in its creation, if “creation” is even the right word to describe something so fundamentally lazy. Be sure to wear a heavy jacket to the theater, because we’re talking about 82 exciting minutes of watching someone look slightly uncomfortable with the temperature, occasionally doing jumping jacks to keep his blood circulating. Brrrr!

Star Dylan McDermott looks bored out of his skull (it’s always fun to imagine him wondering whether Dermot Mulroney could step in and take over) as he plays Robert, a mechanic who wakes up in the titular freezer after having been cold-cocked while using the restroom at a Russian restaurant in New York. Before long, two Russian thugs (Milan Malisic and Andrey Ivchenko) show up to demand, as best they can in their limited English, that he tell them where he’s hidden the $8 million he stole from them. Having no idea what they’re talking about, Robert stalls for time, flirting with the beautiful Russian woman (Yuliya Snigir) brought in to translate for him, and joining forces with an undercover cop (Peter Facinelli) he finds lying nearly dead on a shelf. The clock is ticking, though, as hypothermia will rob Robert of any capacity to make decisions or take useful action in roughly four hours, according to his captors. The phrase “terminal burrowing” is even used, raising the frightening prospect of seeing a grown man huddling in a fetal position.

Freezer’s most basic problem is that its primary threat—chilliness—is unbelievably dull. At one point, the thugs remove Robert’s shoes and socks to immobilize him, forcing him to wrap plastic bags around his feet, but that’s about it, apart from some shivering. For the most part, the movie’s tedious confrontations, which have the Russians walking into the freezer to interrogate Robert at least half a dozen separate times (often to no apparent purpose), could be taking place in any nondescript room; no narrative ingenuity regarding extreme cold ever surfaces, and there’s never any real sense of imminent danger. McDermott does his best to make Robert a fearless, wisecracking smart-ass in the early Bruce Willis mold, but he’s defeated by a script so dopey that its best stab at a witticism is “Baby, I wouldn’t give you the ice off my eyebrows.” Two big plot twists in the final moments only provide opportunity for forehead-slapping. For all the scary refrigeration on view, this is a concept that’s long since gone stale.