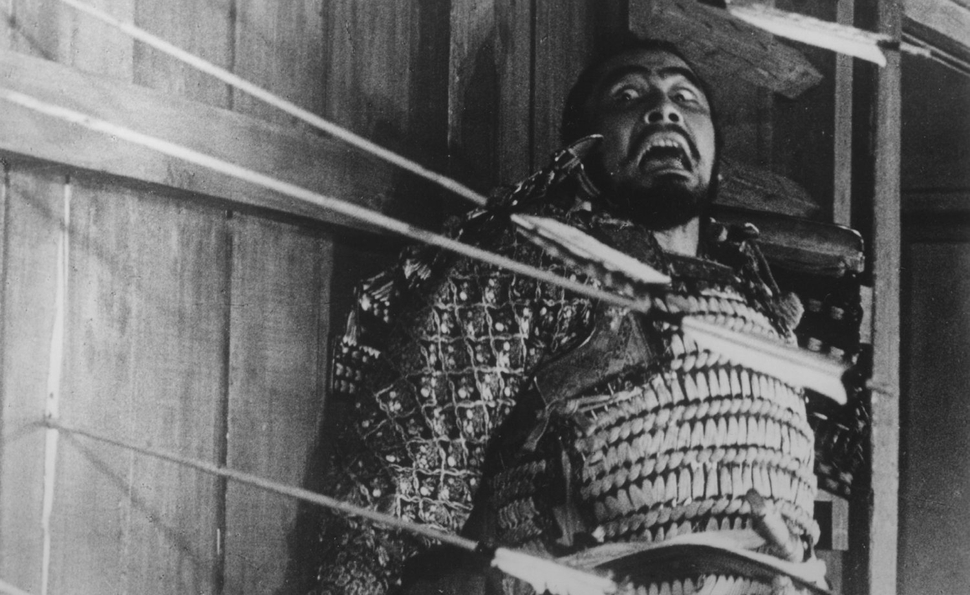 Among the elements at work in Shakespeare’s Macbeth is the question of whether its protagonist is controlled by fate, or possesses free will. Early in the play, Macbeth learns from three witches that he’s destined to become Scotland’s king, a destiny he fulfills—at his wife’s urging, once she’s learned of the prophecy—by killing the rightful king and taking his place. Would Macbeth have committed murder and set the play’s tragedy in motion if he’d never been told of his fate? Or was he, like everyone else, powerless to change what was written in the stars, and given a preview of an inevitability by the witches? That question doesn’t have much of a role in Throne Of Blood, Akira Kurosawa’s 1957 interpretation of Macbeth, however. The film opens and closes with images of a fortress built on at desolate foot of Mt. Fuji, and a chant inviting viewers to “look upon the ruins of the castle of delusion… born of consuming desire never changing now and throughout eternity.” Kurosawa depicts the story’s events as the unavoidable consequence of human ambition, as impossible to prevent as the rolling fog that fills the screen.

That framing device finds a way to make one of Shakespeare’s most pessimistic plays even darker. The film isn’t short of darkness elsewhere, either. Set against the backdrop of 16th-century Japan, a tumultuous, power-struggle-filled century, Throne Of Blood stars frequent Kurosawa leading man Toshirô Mifune as Taketoki Washizu, the film’s equivalent to Macbeth. A skilled warrior, Washizu is first seen returning from a successful battle alongside his fellow general Miki (Akira Kubo). Along the way, they encounter a ghostly woman (Chieko Naniwa) clad in white, turning a spinning wheel, and dispensing information about each man’s fate. Her tone is just short of mocking, as if she’s in on a cosmic joke the men will recognize with time: They’re mere players in a drama written in someone else’s hand.

In Kurosawa’s handling of the story, they’re specifically players in a Noh production. To create his Macbeth (and decades later, his King Lear-inspired Ran), the director looked to a theatrical form even older than Shakespeare for inspiration, drawing on the pared-down sets and highly stylized performances of Noh, which relies as much on carefully choreographed body language as dialogue for its drama. Though Kurosawa forgoes the traditional masks of Noh, they’re subtly glimpsed in the tortured, exaggerated expressions Mifune turns to in moments of rage, and the makeup Isuzu Yamada wears as Washizu’s wife. “You are a Noh mask, so don’t blink your eyes,” Yamada recalls Kurosawa telling her on a documentary included on this new Blu-ray edition of the film. Even if she does blink, it seems as if she doesn’t, and the effect is eerie. When she keeps a nearly expressionless face as she pushes her husband toward murder, she makes an already death-haunted film feel that much eerier.

In the hands of another director, the effect might have been too distancing, as much experiment as film. But Kurosawa was always a moviemaker above all, and here, he invests every setting—the fields of battle, a massive castle set, and the quiet rooms where plots get hatched—with an equal sense of peril and doom. As Stephen Prince observes in his liner notes, Kurosawa’s Macbeth, unlike Shakespeare’s, ends without political order being restored. In defining itself by warfare, its Japan has rushed headlong into destruction. As arch and antique as Kurosawa makes the film, it can’t help but feel like a commentary on Japan’s recent history as much as its past. (Perhaps it isn’t coincidence that it followed on the heels of Kurosawa’s little-seen nuclear-paranoia drama I Live In Fear.) Yet if there’s a cautionary element to Throne Of Blood, it’s overwhelmed by the film’s fatalism. The film’s most famous sequence, wherein Washizu scrambles to avoid one hail of arrows after another, then takes a shaft to the neck, is also the film in miniature. What’s coming can sometimes be seen, but never dodged.

Apart from the very good aforementioned documentary on Throne Of Blood, part of the series Akira Kurosawa: It Is Wonderful To Create, all features come ported over from the previous Criterion edition. These include an informative commentary from Michael Jeck (familiar from his similarly strong Seven Samurai commentary), and two sets of subtitles. Also worth noting: Prince’s liner notes are indispensable, and those considering upgrading should know the new 2K transfer looks great.