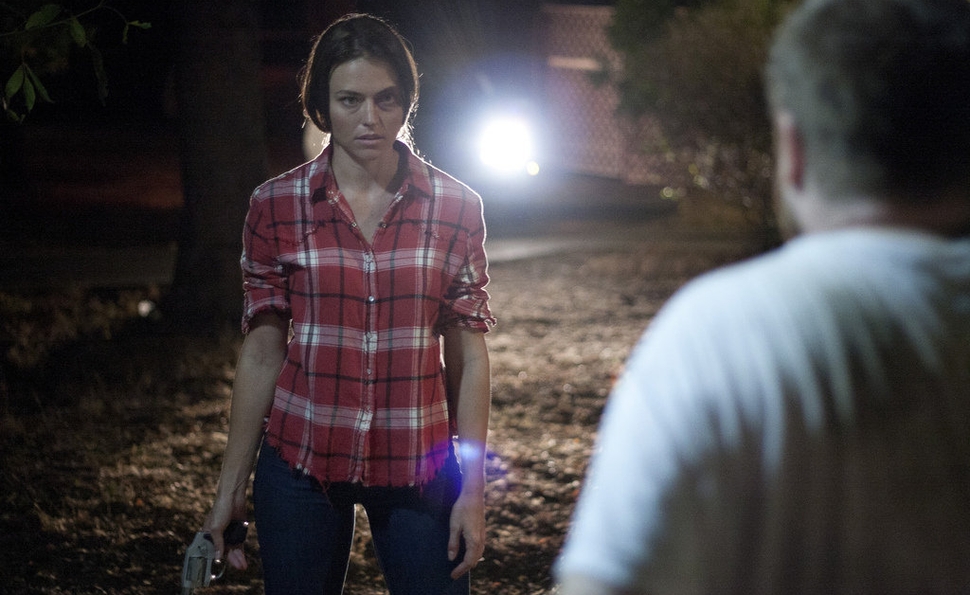 Viewers shouldn’t hold their breath waiting for Allie (Trieste Kelly Dunn) to affectionately wield a firearm in Loves Her Gun: The event foreshadowed in the title finally occurs at the 70-minute mark, and there’s a lot of dim, meandering drama to endure first. Most of the drudgery involves Austinites in suspenders, self-consciously retro ’80s zebra sunglasses, and neon eyeshadow, which still doesn’t approach the hipster ridiculousness of the olde-tyme strongman mustache and matching sideburns sported by Clark (Francisco Barreiro), a member of a three-person band known as The Karate Kids because they perform in costumes with fake arms and legs posed in the Crane Kick position. After Allie is assaulted and mugged in NYC by two men in You’re Next-style animal masks, she joins up with Clark and his bandmates and relocates to their Austin hometown, where she promptly moves in with him, but ignores his advances.

With a black eye that never heals, Allie arrives in Texas, gets a landscaping-sidekick gig working with Sarah (Melissa Bisagni), and does a lot of nothing. Geoff Marslett’s film is an indie of the most aimless variety: Charting Allie’s escapades in Austin with a handheld gaze that’s so haphazardly jumpy and wannabe off-the-cuff that it never attunes itself to her fragile condition, Loves Her Gun goes nowhere at a slothful pace. Allie enjoys some tubing with a group of random strangers, including a guy in a sombrero and a woman in a captain’s hat. Clark hangs out with a dude in a Muppets shirt and the aforementioned zebra glasses. And Allie attends a pool party where a topless woman fires a few rounds from her revolver into the nighttime air—a seemingly momentous turning point for Allie (given her continuing sense of defenselessness) that, in Marslett’s hands, comes off as just another tossed-off incident from her largely uneventful life.

Other than Clark, every male figure in Loves Her Gun is presented as potentially malevolent, like the grocery-store clerk who informs Allie that she can’t buy alcohol after midnight in Texas, then teaches her how to stretch her tense shoulders. Or the next-door neighbor who initially comes off as creepy, but eventually just starts pummeling his wife in public. Male violence is the film’s great bugaboo, yet Marslett is less interested in plumbing his protagonist’s psyche than in wasting time having her navigate a series of standard-issue hanging-out scenarios that provide no insight into her—or any other person’s—interior life. As such, all the characters are ciphers defined by their ridiculous clothes, including Allie, whose overdue transformation into a gun-toting vigilante is dramatized via a shift from a Ramones T-shirt to a flannel button-down.

Marslett sets up his message-making finale with blunt gracelessness, aiming to condemn guns as a dangerous means of seeking empowerment or coping with issues of fear, hurt, and anger. Between his sluggish storytelling and heavy-handed moralizing, however, his schoolmarmish film elicits little more than a desire to see every one of his insufferable characters perish in a fatal shooting spree.