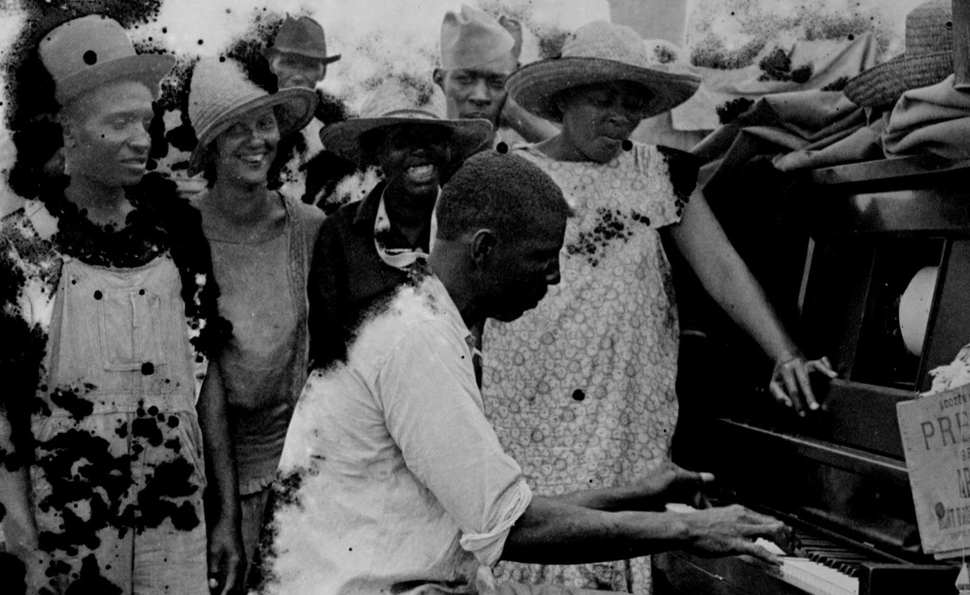 Bill Morrison’s found-footage documentary The Great Flood has much in common with his two best-known features—Decasia and The Miners’ Hymns—but with one key difference. Like The Miners’ Hymns, The Great Flood aggregates images from a specific moment in history, in this case the devastation suffered during the Mississippi River floods of 1927. And like Decasia (recently added to the Library Of Congress’ prestigious National Film Registry), The Great Flood is at times just as much about the texture of film stock as it is about the pictures in the frame. Some of the newsreels and home movies Morrison has unearthed—of flooded streets and muddy migrant camps—has suffered severe damage, such that the footage now carries the essence of its contents, stained and warped, transformed by forces of nature.

What’s new about The Great Flood is its soundtrack, composed and performed by esteemed jazz guitarist Bill Frisell. Morrison’s films have always relied heavily on music to fill in the spaces that narration or interviews do in most documentaries and essay-films. But The Great Flood is touring around with live accompaniment by Frisell and his band, which adds an extra dimension of physicality to the experience, especially given Frisell’s fondness for reverb. The Great Flood is structured like an album, with 12 distinct sections scored by songs that run the gamut from moody abstraction to jaunty juke-joint homages. The structure mirrors some of what the movie is about. While Morrison devotes chapters of The Great Flood to politicians’ photo-ops and the dynamiting of the levees, the film’s overall arc charts how poor sharecroppers were driven from their homes—intentionally, in some cases—and forced to resettle in big cities up north, where they helped develop the sounds of jazz, R&B, and rock ’n’ roll. The musical element is essential.

The tastefulness of Morrison’s films runs counter to the avant-garde’s usual impulse to provoke and unsettle. He isn’t manipulating the footage in The Great Flood much, beyond editing it into mini-vignettes and layering in the occasional superimposition. And with Frisell’s music in the background—sounding pleasant even at its most dissonant—The Great Flood isn’t too different from the kind of classy historical documentary that would play during a PBS pledge drive. It lacks edge, in other words.

But the music is mesmerizing, especially when paired with apocalyptic images of water rushing through the remains of small towns, and people in boats paddling past the rooftops of their former houses. The Great Flood works as a wordless narrative of human endurance, showing communities gathering to stack sandbags, then gathering again to dig out of the muck after their previous efforts failed. But it’s even better when Morrison and Frisell make subtler connections, like when Morrison inserts a rapid-fire montage of clothing designs from the 1927 Sears Roebuck catalog, then later shows evacuees wearing some of the same fashions from those pages. Or when The Great Flood opens with the arduous daily work of sharecropping, then shows some of those displaced folks streaming happily out of an urban church post-disaster. The latter is a different kind of flood—just as transformative, but in a more positive way.